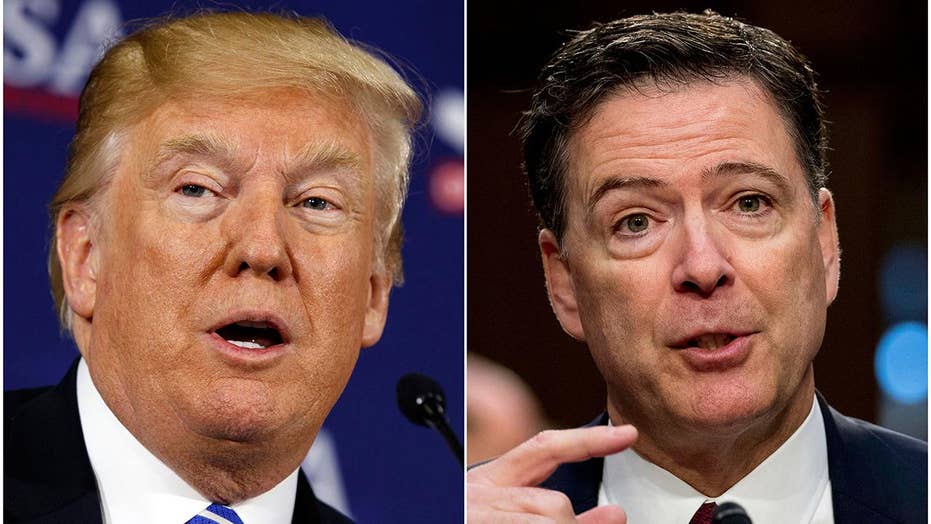 The raging debate over Special Counsel Robert Mueller's Russia report has invited fresh comparisons to the fallout from the conclusion of another politically charged case—the Hillary Clinton email probe.

Back in 2016, Comey famously went rogue to hold a press conference recommending against charges for Clinton’s use of a personal server for official State Department business, while giving her political foes ammunition by calling her actions “extremely careless.” The Mueller report, meanwhile, left open the obstruction question but included nearly 200 pages of material that Trump’s Democratic critics say clearly demonstrates how he impeded investigations.

In a floor speech earlier this week, Sen. Chuck Grassley, R-Iowa, drew the comparison between the two situations, calling both “problematic.”

Noting that outgoing Deputy Attorney General Rod Rosenstein authorized Mueller to prosecute federal crimes that arose in the course of the probe when “necessary and appropriate,” Grassley said: “But that’s not what the special counsel did on the obstruction question. Instead, the special counsel declined to make a ‘traditional prosecutorial decision.’”

“It is not a prosecutor’s job to ‘exonerate’ a subject. It’s to charge a crime, or not charge a crime,” Grassley continued. “But in his report, the special counsel explains his decision not to make a decision.”

“Comey made a prosecutorial decision that wasn’t his to make,” Grassley said. “He also released derogatory information about Secretary Clinton and then didn’t show all of his work.”

He added: “The special counsel’s report is at least equally problematic.”

Grassley explained that Volume II of Mueller’s report, which focuses on obstruction, lays out “investigative work product but leaves the charging decision hanging.”

“'The Report sounded an awful lot as being Comeyesque, in other words, I’m not going to charge this person (there wasn’t even close to being a crime), but I’m going to criticize him on the way out the door. That’s unfortunate because it’s stepping outside of the role,’” Trump tweeted, paraphrasing Ray's comments from an interview on Fox News.

And while the White House did not officially draw the same Mueller-Comey comparison, White House Counsel Emmet Flood last month laid out a series of concerns with Mueller’s report, specifically on the team’s handling of the obstruction inquiry.

“The Special Counsel and his staff failed in their duty to act as prosecutors and only as prosecutors,” Flood wrote in a letter to Attorney General Bill Barr, complaining that the report "suffers from an extraordinary legal defect" by failing to comply with the "requirements of governing law."

WHITE HOUSE RIPS MUELLER IN LETTER TO DOJ, SAYS TEAM 'FAILED IN THEIR DUTY TO ACT AS PROSECUTORS'

Flood raised concerns that the team did not reach a determination on the obstruction question while still going into great detail about the probe's findings and including a pointed passage that stated the probe did not exonerate the president. That passage read: “The evidence we obtained about the President’s actions and intent presents difficult issues that prevent us from conclusively determining that no criminal conduct occurred. Accordingly, while this report does not conclude that the President committed a crime, it also does not exonerate him.”

Flood noted prosecutors “simply are not in the business of establishing innocence” and described these as "political statements.”

“I think Mueller wrote an internal cross-memo that addresses strength and weaknesses of the obstruction charge and left it to his bosses,” he told Fox News.

“Both are surprising, in that we didn’t know they would reach a non-decision. Comey’s announcement on the Clinton probe was one where he took it upon himself to be the voice of the Justice Department, and that was improper,” Trusty explained, referring to the fact that the DOJ made the ultimate call. “But with Mueller, I think it’s closer to recommending non-prosecution than people are giving credit.”

Meanwhile, former assistant FBI director Chris Swecker, who worked closely with Mueller for half a decade, said that Comey “violated very clear cut rules,” while Mueller “made a very clear cut decision” on the Russian collusion inquiry and sent the decision on obstruction to the attorney general.

“Mueller understands the chain of command and knew that decision was to go to Barr,” Swecker told Fox News Tuesday. “Unlike Comey, Mueller allowed the attorney general to play that role. Comey took the ball out of Attorney General Lynch’s hands and did everything himself.”

Swecker added: “I think what Mueller did was okay, I would have liked to have seen him make the decision, but because there was some uncertainty, he had to place it with the appropriate authority.”

But Comey, himself, said he found it "confusing" that Mueller did not come to a conclusion on obstruction.

"The part that's confusing is I can't quite understand what's going on with the obstruction stuff," Comey said, according to NBC News. "And I have great faith in Bob Mueller, but I just can't tell from the letter why he didn't decide these questions when the entire rationale for a special counsel is to make sure the politicals aren't making the key charging decisions."

Comey added that despite the fact that there was no underlying crime with regard to conspiracy with the Russians, an obstruction charge was still a possibility.

"Obstruction crimes matter without regard to what you prove about the underlying crime," he said.