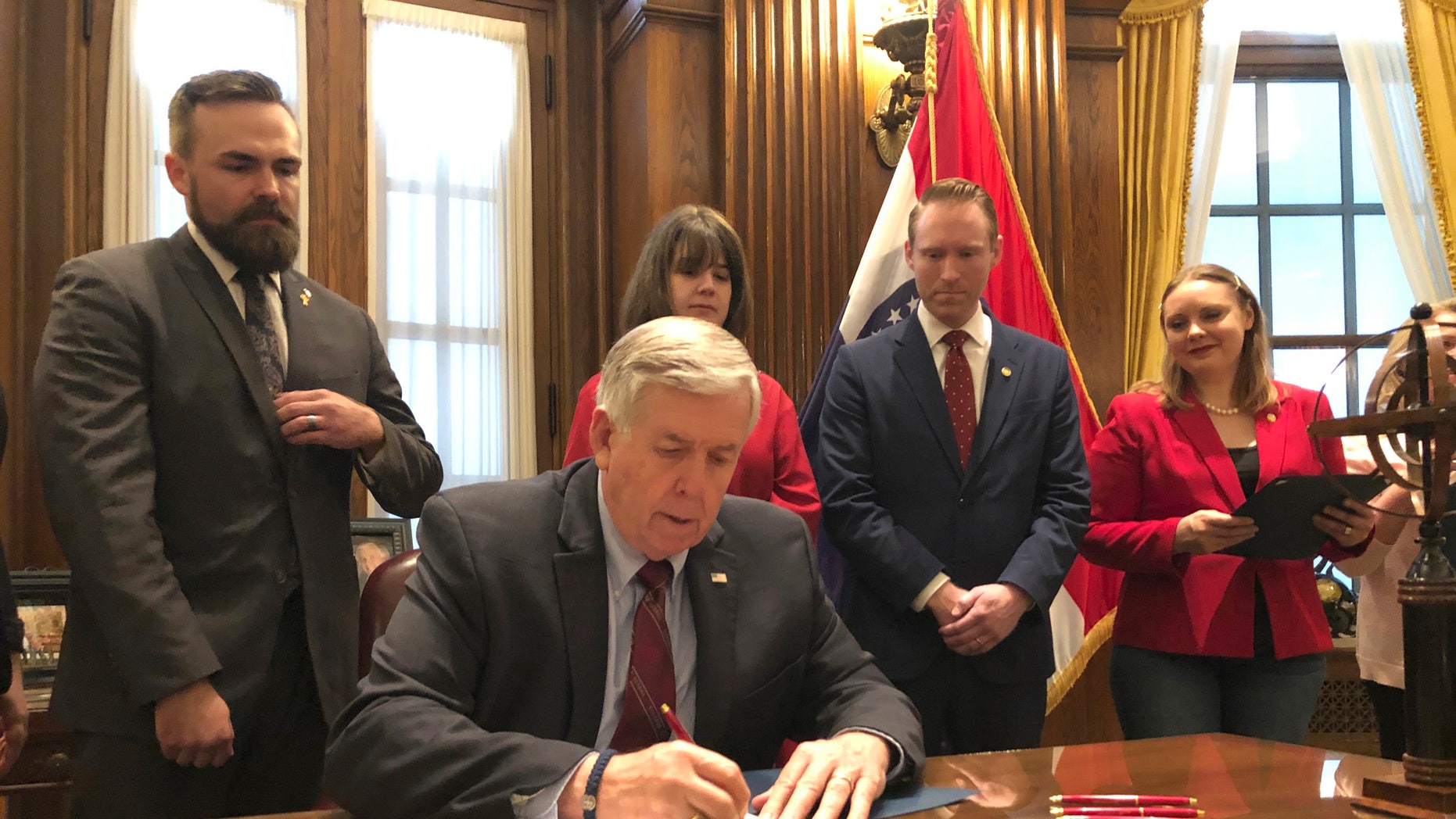 Missouri Gov. Mike Parson on Friday signed a bill that bans abortions on or beyond the eighth week of pregnancy without exceptions for cases of rape or incest, making it among the most restrictive abortion policies in the nation.

Under the law that comes into force Aug. 28, doctors who violate the eight-week cutoff could face five to 15 years in prison. Women who terminate their pregnancies cannot be prosecuted. A legal challenge is expected, although it's unclear when that might occur.

The measure includes exceptions for medical emergencies, such as when there is a risk of death or permanent physical injuries to "a major bodily function of the pregnant woman." But the lack of exceptions women who find themselves pregnant after being raped or subject to incest has drawn sharp criticism, including from wealthy GOP donor David Humphreys, a Missouri businessman, who had urged the Republican governor to veto the bill and called it "bad public policy."

Parson defended the lack of exceptions as he spoke to a group of abortion opponents gathered Friday for the bill signing in his Capitol office.

"Is it a terrible thing that happens in those situations? Yes it is. ... But the reality of it is bad things do happen sometimes. But you have two months to decide what you're going to do with that issue, and I believe in two months you can make a decision," he said.

The American Civil Liberties Union of Missouri said it was exploring "all options, including litigation, to block the law from going into effect." The organization's state legislative and policy director, Sara Baker, in a statement said the bill is "unconstitutional, and it must be stopped."

Alabama's governor signed a bill on May 15 making performing an abortion a felony in nearly all cases. Supporters have said they hope to provoke a legal challenge that will eventually force the U.S. Supreme Court to revisit its landmark 1973 Roe v. Wade ruling that legalized abortion nationally.

Unlike Alabama's near-total abortion ban, lawmakers who helped draft the Missouri bill say it's meant to withstand court challenges instead of spark them. If the eight-week ban is struck down, the bill includes a ladder of less-restrictive time limits at 14, 18 or 20 weeks.

Missouri's bill also includes an outright ban on abortions except in cases of medical emergencies, but that would kick in only if Roe v. Wade is overturned. Missouri Right to Life called it "the strongest pro-life bill in Missouri history."

Missouri state House Democratic Minority Leader Crystal Quade said in a written statement the new law treats women "as little more than fetal incubators with no rights or role in the decision, even in cases of rape and incest."

Kentucky, Mississippi, Ohio and Georgia also have approved bans on abortions once fetal cardiac activity can be detected, which can occur in about the sixth week of pregnancy. Some of those laws already have been challenged in court, and similar restrictions in North Dakota and Iowa have been struck down by judges.

Missouri already has some of the nation's most restrictive abortion regulations, including a requirement that doctors performing abortions have partnerships with nearby hospitals. Missouri is down to one clinic performing abortions, which is in St. Louis.

A total of 3,903 abortions occurred in Missouri in 2017, the last full year for which the state Department of Health and Senior Services has statistics online. Of those, 1,673 occurred at under nine weeks and 119 occurred at 20 weeks or later in a pregnancy.

A total of 2,910 abortions occurred in 2018 in Missouri, according to the agency.

The bill also bans abortions based solely on race, sex or a diagnosis indicating the potential for Down syndrome.

It also requires a parent or guardian giving written consent for a minor to get an abortion to first notify the other parent, except if the other parent has been convicted of a violent or sexual crime, is subject to a protection order, is "habitually in an intoxicated or drugged condition," or lacks legal or physical custody.