Missouri led a group of 17 states that Wednesday afternoon filed a brief with the Supreme Court supporting the Texas lawsuit aimed at delaying the appointment of presidential electors from Georgia, Pennsylvania, Michigan and Wisconsin.

The brief mirrors the argument of the Texas suit in saying that the states acted unconstitutionally when either their judiciaries or executive branches changed their elections laws. The Texas suit, and the states that support it, say that only state legislatures may set laws regarding how states appoint their presidential electors.

"The integrity of our elections is of critical importance to maintaining our republic, both today and in future elections,” Missouri Attorney General Eric Schmitt said in a statement. “The stakes of protecting our Constitution, defending our liberty and ensuring that all votes are counted fairly couldn’t be higher. With this brief, we are joining the fight."

The Trump campaign also filed a brief asking to join on the Texas suit on Wednesday.

"The illegal suspension or violation of state law thus calls directly into question the certification of the results of the elections in Defendant States for Vice President Joe Biden, Proposed Plaintiff in Intervention’s opponent in the election," its brief said. "President Trump’s interest in the outcome of this litigation could therefore not be more acute."

The brief filed by Missouri and the other states also warns that the changes enacted by the state executives and judicial branches opened the states' elections up to potential fraud.

"The Bill of Complaint alleges that non-legislative actors in each Defendant State unconstitutionally abolished or diluted statutory safeguards against fraud enacted by their state Legislatures, in violation of the Presidential Electors Clause," the brief states.

It continues: "All the unconstitutional changes to election procedures identified in the Bill of Complaint have two common features: (1) They abrogated statutory safeguards against fraud that responsible observers have long recommended for voting by mail, and (2) they did so in a way that predictably conferred partisan advantage on one candidate in the Presidential election."

The Texas legal action is an extraordinary effort to essentially overturn the result of the presidential election, which President-elect Biden won because of key victories by tens of thousands of votes in the states Texas is suing. It follows numerous losses by President Trump's legal teams and his allies in lower courts as claim after claim of widespread voter fraud that may have affected the result of the election has gone unsubstantiated.

Texas' suit is unique in that it seeks to take advantage of the Supreme Court's rarely used original jurisdiction to bypass the lower courts and put the issue directly in front of the justices. 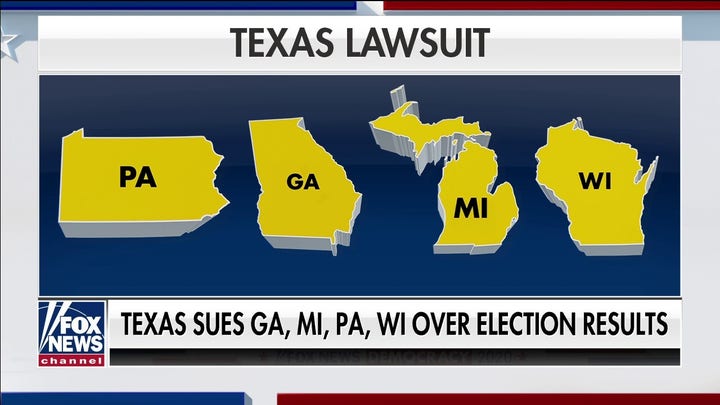 Texas specifically asks the Supreme Court to declare Michigan, Wisconsin, Pennsylvania and Georgia's elections "in violation of the Electors Clause and the Fourteenth Amendment of the Constitution;" declare electoral votes from those states invalid; prevent the states' electors from meeting or being certified; and direct the states to appoint new presidential electors.

"With all due respect, the Texas Attorney General is constitutionally, legally and factually wrong about Georgia," a Carr spokesperson told the Dallas Morning News. Carr is the recently named chairman of the Republican Attorneys General Association.

They argue that they have an interest in the case because "the unconstitutional administration of elections" in some states dilutes votes in their own states.

"When non-legislative actors in other States encroach on the authority of the 'Legislature thereof' in that State to administer a Presidential election, they threaten the liberty, not just of their own citizens, but of every citizen of the United States who casts a lawful ballot in that election—including the citizens of amici States," the Wednesday brief says.

The four states being sued have until 3 p.m. Thursday to file a response with the Supreme Court.