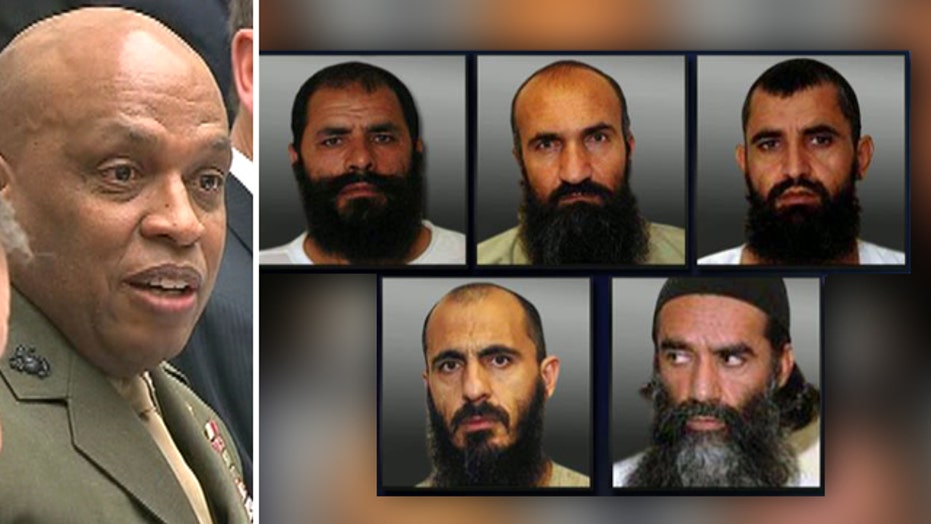 Defense official: Taliban 5 will probably go back to fight

A top military intelligence official acknowledged Tuesday there's "very little" his agency could do to prevent the Taliban fighters traded for Sgt. Bowe Bergdahl from returning to the battlefield later this year.

Lt. Gen. Vincent Stewart, director of the Defense Intelligence Agency, made the comments in testimony before the House Armed Services Committee, shortly after officials confirmed that at least one of the five former Guantanamo prisoners freed last year was intercepted making calls to the Taliban.

Those five ex-prisoners are currently being monitored in Qatar, but the terms of that arrangement expire in May or June. Asked Wednesday what the DIA could do to protect American troops in Afghanistan from those fighters returning to the battlefield, Stewart indicated the most they could do is issue a warning.

He stressed that his agency has been on the "periphery" of the move to release those five detainees, and confirmed his agency was not even consulted prior to their release. Generally speaking, Stewart said over the last four or five years, officials have confirmed about 18 percent of former detainees have returned to the battlefield. Another 11 percent are suspected of having returned. He said, roughly, one in five former prisoners could be expected "to go back into the business."

The warning came during a hearing where top military officials warned about the expanding reach and ambitions of groups ranging from the Taliban to Al Qaeda to the Islamic State.

In his written remarks, Stewart warned that the Taliban, Al Qaeda and their allies "will likely seek to exploit the reduced Coalition presence" in Afghanistan by "pressuring" local security forces in rural areas and "conducting high profile attacks in major population centers, and expanding their safe havens."

He also warned about the "spread" of the Islamic State beyond Iraq and Syria, to three other countries.

"With affiliates in Algeria, Egypt, Libya, the group is beginning to assemble a growing international footprint that includes ungoverned and under-governed areas," he said in written remarks.

Stewart was questioned on the so-called "Taliban 5" on Tuesday by Rep. Mike Conaway, R-Texas. Lawmakers have raised fresh concerns in recent days about those freed prisoners amid claims that one of them tried reaching out to the Taliban.

The White House and Pentagon last week defended the terms of that trade and insisted that all five former detainees were in Qatar and accounted for -- and have not returned to the battlefield.

But lawmakers questioned what would happen after the strict monitoring in Qatar is over.

"What happens then?" Sen. Kelly Ayotte, R-N.H., said in an interview with Fox News last week. "Never mind that they're already attempting to re-engage and obviously making communications to do so."