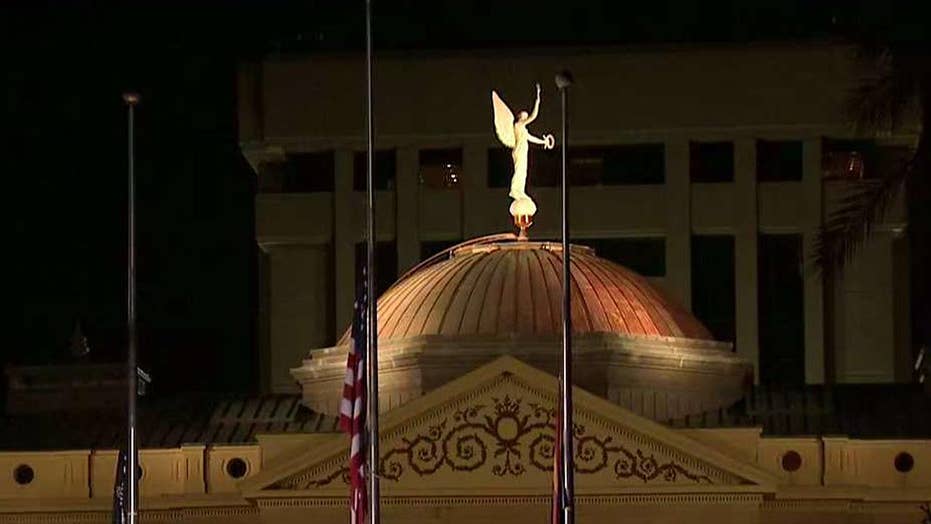 A hearse carrying the body of U.S. Sen. John McCain, who died Saturday after a year-long battle with brain cancer, arrived in uptown Phoenix on Saturday evening.

At least two-dozen people stood near the freeway exit as the motorcade that carried the senator’s body from his Cornville home arrived at the mortuary after 8:30 p.m. local time, the Arizona Republic reported.

By late evening, about 200 people were gathered outside the A.L. Moore Grimshaw Mortuary. Some could be heard shouting, “I love you, John,” while others waved flags or wore red, white and blue.

"We knew it was coming. It was expected," one onlooker told the Republic. "It happened so quickly. But he led a good life and I'm sure his family is proud of him. He left a legacy that will long be remembered."

Arizona Gov. Doug Ducey ordered all flags in the state to be lowered to half-staff in honor of McCain.

“May God rest his soul and look over his entire family. Our state and our nation mourn together," the governor tweeted.

Meanwhile in Washington, the U.S. flag was seen at half-staff over the White House in honor of the fallen senator.

McCain is expected to lie in state in both Arizona and Washington, before being laid to rest at the U.S. Naval Academy Cemetery in Annapolis, Md. His website states that more information will be available once funeral services are finalized.

Before he died, McCain requested that former presidents George W. Bush and Barack Obama give eulogies at his funeral. Both men paid tribute to McCain on Twitter.

McCain, a Vietnam prisoner of war, was elected to the U.S. House of Representatives in 1982 and U.S. Senate in 1986. He was the GOP nominee for president in 2008. During his time in office he earned a reputation for reaching across the aisle.

He died Saturday at age 81, four days shy of his birthday. He is survived by his wife, Cindy, seven children, and five grandchildren, his website states.