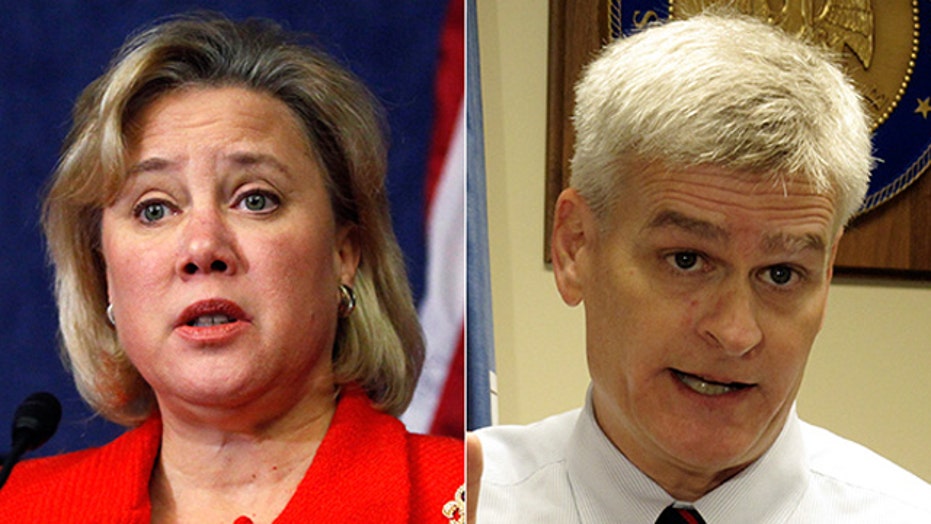 Landrieu, who was seeking a fourth term, trailed by double digits and had lost most of her support going into the election. With 100 percent of the precincts reporting late Saturday, Cassidy had received 56 percent of the vote, to 44 percent for Landrieu.

Landrieu barnstormed the state this week, driving some 1,200 miles in a rented SUV, stopping in little towns and bigger cities, making one last appeal to voters to give her another term in Washington.

“There is no quit,” Landrieu said in her concession speech. “It’s been nothing but a joy to serve this state for over 34 years.”

Cassidy’s win extends the GOP's domination of the 2014 midterm elections that put Republicans in charge of Capitol Hill for the final two years of President Obama's tenure.

Republicans will hold 54 seats when the Senate convenes in January, nine more than they have now.

“Once again, voters have spoken clearly,” Republican National Committee Chairman Reince Priebus said. “They have rejected the Democrat agenda and the Obama-Clinton policies that have produced higher healthcare costs and job-killing regulations.”

Like victorious Republicans in those races, Cassidy, 57, made his bid more about Obama than about his own vision for the job. An Illinois native and medical doctor, Cassidy made few public appearances during the runoff, seeking to avoid missteps that could change the race.

But in a state where 73 percent of white voters on Nov. 4 told pollsters they "strongly disapproved" of the president, that was enough to prevent Landrieu, 59, from finding her footing. Cassidy also enjoyed a prodigious advertising advantage in the runoff: Of every dollar spent by outside groups during the one-month runoff, 97 cents benefited the congressman.

Landrieu had narrowly led a Nov. 4 primary ballot that included eight candidates from all parties. But at 42 percent, she fell well below her marks in previous races and endured a one-month runoff campaign that Republicans dominated via the airwaves while national Democrats financially abandoned her effort.

In the South, Democrats will be left without a single governor or U.S. senator across nine states stretching from the Carolinas to Texas. The House delegations from the same region are divided almost entirely by race, with white Republicans representing majority-white districts, while majority non-white districts are represented by black or Hispanic Democrats.

Landrieu tried several messages over the course of her losing effort.

Most recently, she had hammered Cassidy as being unfit for the job and interested more in partisanship than helping Louisiana. She directed her most pointed criticism at Cassidy's medical teaching job with the Louisiana State University hospital system. Calling Cassidy "Dr. Double Dip," Landrieu suggested the congressman collected a $20,000, taxpayer-funded salary for little or no work, describing gaps and discrepancies in Cassidy's LSU time sheets. LSU said it's looking into the time sheet questions.

She argued that the race shouldn't be about Obama, but also targeted advertising on radio stations geared to the black community, where the president remains popular.

Her anchor argument was that her senatorial seniority was a boon for Louisiana, particularly her chairmanship of the Senate's energy committee, an important panel for this oil-rich state. But that argument was gutted on Nov. 4 when Republicans won the Senate majority, meaning Landrieu would have lost her post even had she won.

Landrieu, who said a campaign canvasser was fatally struck by a vehicle Saturday, managed last month to get the Democrat-controlled Senate to vote on her bill to approve the Keystone XL pipeline, which would have helped with voters in oil-rich Louisiana. But the measure failed when she could not get one more Democrat to vote in favor of the plan.