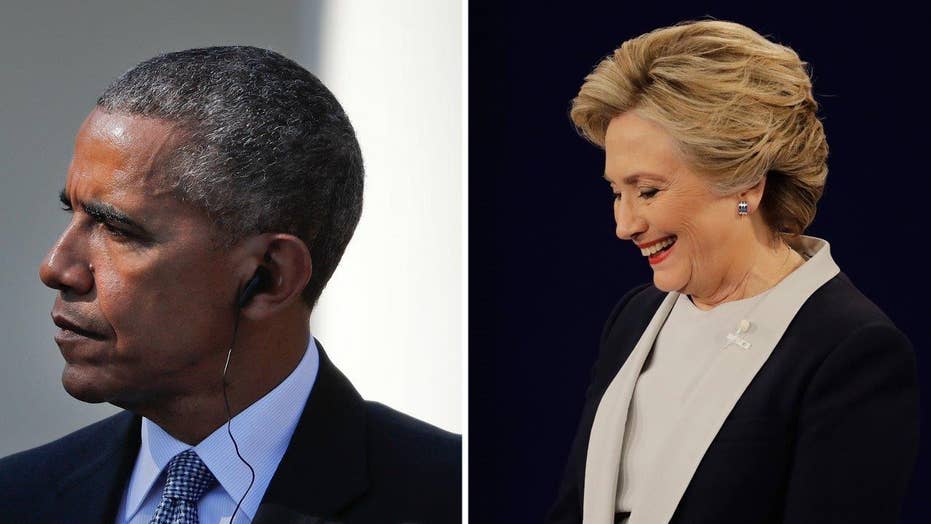 Heavily redacted files show an agency official described the incident with Kennedy as a 'quid pro quo;' Catherine Herridge has the story for 'Special Report'

The Republican chairman of the House Judiciary Committee is calling for a federal bribery probe after newly published FBI documents included claims that a top State Department official sought a “quid pro quo” with the bureau in a bid to downgrade the classification on a Hillary Clinton server email.

“Undersecretary [Patrick] Kennedy’s attempt to barter away American national security interests for plainly political purposes is appalling, and may rise to the level of a federal crime,” Rep. Bob Goodlatte, R-Va., wrote in a letter to Attorney General Loretta Lynch on Tuesday.

In the heavily redacted files, known as 302s, an FBI official described the incident with Under Secretary for Management Patrick Kennedy as a “quid pro quo.” According to the files, in exchange for marking a particular email unclassified, the State Department would “reciprocate” by letting the FBI place “more Agents in countries where they are presently forbidden.”

While both the FBI and State Department emphasized Tuesday that this arrangement never happened, the FBI records show Kennedy pushed hard, and often, to reduce the number of classified emails on Clinton’s personal server she used as secretary of state – after Congress issued a subpoena and preservation order for the emails in March 2015.

“I ask that the Department of Justice look into this matter,” Goodlatte wrote. “Given the sensitive nature of the participants involved, including former Secretary of State and Presidential candidate Clinton, a separate high ranking official at the State Department, and a high ranking FBI official in charge of America’s counter-terrorism efforts, it is imperative that this matter be investigated and that the investigation be done in an apolitical way with agents who were not involved in the initial Clinton Investigation.”

Kennedy issued a statement Wednesday saying his motivations “were never political” and disputing the claims of a quid pro quo.

He explained that in 2015 he did reach out to a “senior FBI official” to “better understand” the bureau’s proposal to “upgrade” one of Clinton’s emails.

“The State Department, myself included, simply did not understand why the FBI wanted to upgrade this particular email and we thought a B7 law enforcement exemption would be more appropriate,” he said, arguing the department has a responsibility to decide whether its documents are classified or not.

He added, “I can’t speak to why the individual I spoke to may have a certain impression or recollection of our conversation -- but it simply does not align with facts. I can say, the FBI official I spoke to raised the topic of FBI Iraq slots as an entirely separate matter. The two matters were not linked. There was no quid pro quo, nor was there any bargaining. At no point in our conversation was I under the impression we were bargaining. In the end, State upgraded the email at the FBI’s request and in addition, no increase in FBI Iraq slots resulted from this conversation.”

Kennedy's claim he sought a "B7" exemption conflicts with the FBI interview summary, which states he wanted a more obscure "B9" exemption.

President Obama, asked about the controversy during a press conference Tuesday in the Rose Garden, also rejected the way the exchange with Kennedy and the FBI official has been described, and compared it to interactions that frequently happen between the two agencies.

Late Wednesday, The Washington Post published the first interview with retired FBI agent Brian McCauley, who said he and Kennedy had discussed doing a favor for one another – but when McCauley found out a classified Benghazi email was involved, he turned Kennedy down.

One of McCauley’s FBI colleagues told investigators that he pressured him to change the email to unclassified, and relayed the conversation with Kennedy as a “quid pro quo.”

State Department spokesman Mark Toner said Tuesday that Kennedy was not out of line to ask about the rationale behind the classification on the email in question.

The FBI said in a statement over the weekend that the FBI never agreed to change the classification on the email, and, “Although there was never a quid pro quo, these allegations were nonetheless referred to the appropriate officials for review.​