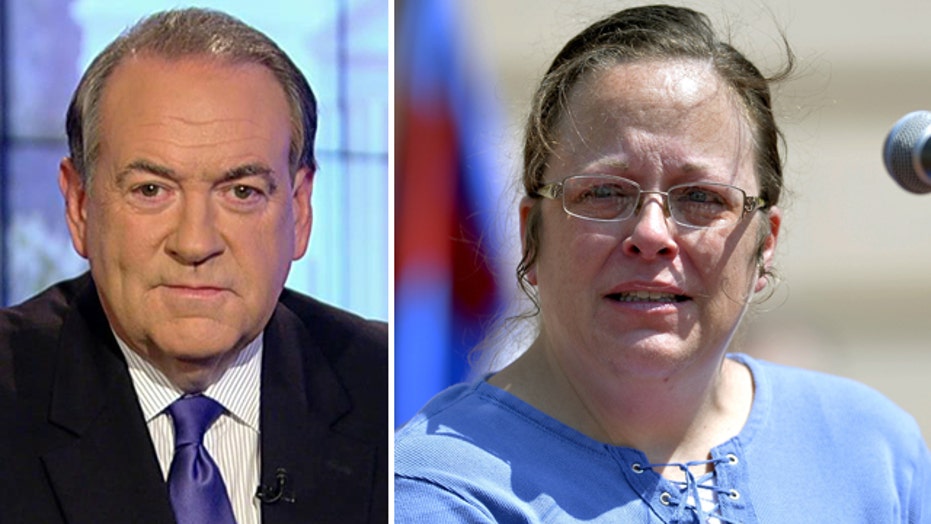 Huckabee to hold rally in support of Kentucky county clerk

WASHINGTON – The case of Kim Davis, the defiant Kentucky clerk thrown in jail for refusing to issue marriage licenses to same-sex couples, has divided the 2016 Republican presidential field -- pitting social conservatives championing her cause against others who suggest she's gone too far.

Former Arkansas Gov. Mike Huckabee is planning a rally Tuesday in support of Davis, and says he’s offered her “prayers and support.” The Southern Baptist minister, who won the 2008 Iowa caucuses with the help of a social conservative coalition but is struggling in the polls this time around, argues Davis is on sound legal footing and commended her Friday for “not abandoning her religious convictions and standing strong for her religious liberty.”

On his campaign website, Huckabee posted a “Free Kim Davis” petition and demanded “we must end the criminalization of Christianity!"

Former Pennsylvania Sen. Rick Santorum also has come out strong in support of Davis, as has Texas Sen. Ted Cruz.

Cruz called Davis’ jailing an act of “judicial tyranny” and encouraged “every believer, every constitutionalist, every lover of liberty to stand with Kim Davis.” And he criticized any 2016 candidate not doing so.

Indeed, several other candidates have walked a fine line, and at least hinted they think Davis has overstepped now that gay marriage has been ruled legal nationwide.

Former Florida Gov. Jeb Bush said "she is sworn to uphold the law."

Former HP executive Carly Fiorina told conservative radio host Hugh Hewitt on Tuesday, "I think that we must protect religious liberties with great passion and be willing to expend a lot of political capital to do so now because it’s clear religious liberty is under assault in many, many ways."

Fiorina told the host it was now up to Davis to make a personal decision about what is required of her at her job.

Whether voters and caucus-goers will see the clerk's case as a litmus test for candidates' social conservative credibility remains to be seen. But the case drags on.

With the clerk herself in jail, the county clerk’s office started to issue same-sex marriage licenses through Davis’ deputy clerks. Davis’ son, Nathan Davis, was the lone holdout from the office.

The first couple to get the license Friday was William Smith Jr. and James Yates.

“I just want the licenses given out,” Yates said. I don’t want her in jail. No one wanted her in jail.”

During a hearing Thursday, U.S. District Judge David Bunning told Davis she would be released if she promised not to interfere with her employees issuing licenses, but she refused.

In Louisiana, presidential candidate and Gov. Bobby Jindal says the Davis case is exactly like ones where business owners – like florists and bakers -- have refused their services for same-sex ceremonies.

Sen. Rand Paul, R-Ky., told CNN, “I think it’s absurd to put someone in jail for exercising their religious liberty.”

Others, like New Jersey Gov. Chris Christie and Marco Rubio, searched for a middle ground.

“While the clerk’s office has a governmental duty to carry out the law, there should be a way to protect the religious freedom and conscience rights of individuals working in the office,” Rubio told The New York Times.

Christie told radio host Laura Ingraham the situation is different when it comes to public employees.

“What I’ve said before is for someone who works in the government has a bit of a different obligation than someone who’s in the private sector or obviously working for education institutions that’s religiously based or others,” he said, adding, “but my point is we have to protect religious liberty and people’s ability to be able to practice their religion freely and openly, and of course we have to enforce the law too.”

During another radio interview with Hugh Hewitt on Wednesday, South Carolina Sen. Lindsey Graham said despite Davis’ conviction, “the rule of law is the rule of law.”

Also on Thursday, Marion County Circuit Judge Vance Day, a former chairman of the Oregon Republican Party, began taking steps to create a legal defense fund in response to his decision not to perform same-sex ceremonies.