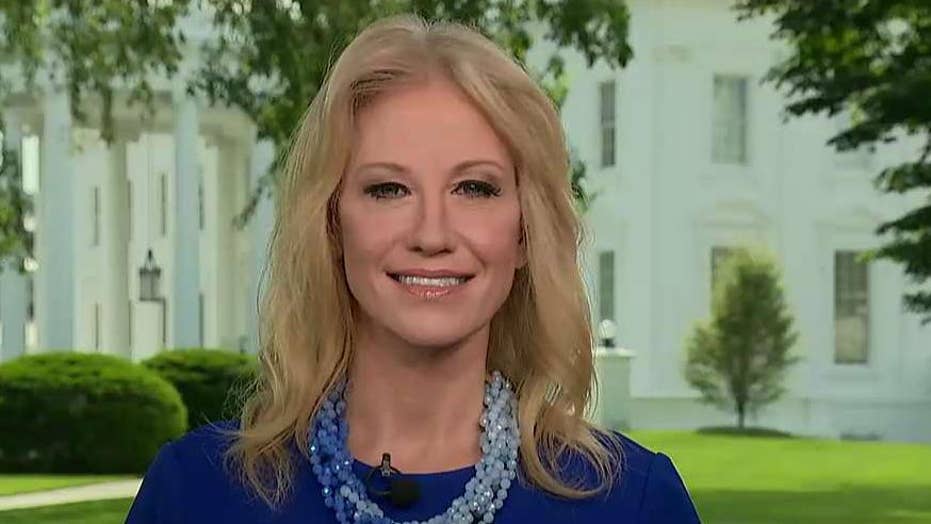 Counselor to President Trump Kellyanne Conway says the president will work with Democrats on infrastructure once Democrats are done 'playing games.'

Presidential adviser Kellyanne Conway accused Nancy Pelosi of treating her like her "maid," as she fired back at the House speaker Thursday following a tense encounter at the White House.

The counselor to President Trump gave her side of the story on Fox News' "America's Newsroom," after it emerged that Pelosi brushed her off a day earlier by saying she wouldn't talk to "staff."

The clash happened after Trump cut short a meeting with Democratic leaders on infrastructure amid complaints about their investigations into him. Conway told Fox News that Pelosi proceeded to give an “odd” history of infrastructure in America, when Conway asked if she'd like to "address some of the specifics the president talked about."

“She said … 'I talk to the president, I don’t talk to staff,'” Conway recalled Thursday. “You know, let’s face it, she’s the sixth-most-rich member of Congress. She treats everybody like they’re her staff.”

Pelosi is among the wealthiest members in Congress, though her actual ranking varies depending on how it's calculated.

But Conway added: “She treats me like I’m either her maid or her driver or her pilot or her makeup artist and I’m not. And I said to her ‘how very pro-woman of you’ … she’s not very pro-woman.”

Speaking to reporters later Thursday morning, Pelosi declined to comment on their encounter.

"I'm not going to talk about her. I responded as the speaker of the House to the [president]. Other conversations people want to have among themselves is up to them," she said.

The meeting involving Trump, Pelosi and Senate Minority Leader Chuck Schumer, D-N.Y., fell apart in a matter of minutes. Pelosi, moments earlier, accused the president of having “engaged in a cover-up” with regard to the Russia investigation. Trump abruptly ended their session and then decried Democrat-led investigations in a Rose Garden statement.

At the podium, Trump said Pelosi's comments and the Democratic-led probes prevented them from negotiating.

“You can’t do it under these circumstances,” Trump said. “Get these phony investigations over with.”

Later in the day, Pelosi accused the president of committing an “impeachable offense.”

“The fact is, in plain sight, in the public domain, this president is obstructing justice and he’s engaged in a cover-up,” Pelosi said. “And that could be an impeachable offense.”

At the same time, Pelosi this week has scrambled to tamp down calls from rank-and-file Democrats to launch impeachment proceedings against the president. She held a closed-door meeting Wednesday with the Democratic caucus to discuss their battles with the administration.

The meeting came as top Democrats have steadily ramped up pressure on the Trump administration. On Tuesday, the Justice Department reached an agreement with House Intelligence Committee Chairman Adam Schiff, D-Calif., to turn over some documents related to Special Counsel Robert Mueller's investigation, in a rare de-escalation. But it only came after Democrats issued a subpoena, one of many that congressional Democrats have approved for Trump-related investigations. They've also pursued a contempt citation against Attorney General Bill Barr and could do the same for ex-White House counsel Don McGahn.

But as for infrastructure, Schumer accused the president of “looking for every excuse” not to pursue a bipartisan plan.