Constitutional law attorney Jenna Ellis on what it will take to put a stop to Democrats' collusion claims.

President Trump slammed Democrats as the “Do Nothing Party” Thursday morning on the heels of a contentious meeting with Nancy Pelosi and Chuck Schumer, claiming they're too focused on investigations into his administration to make progress on policy priorities like infrastructure.

“The Democrats have become known as THE DO NOTHING PARTY!” Trump tweeted.

A day earlier, House Speaker Pelosi accused Trump of having a "temper tantrum" when he abruptly ended a meeting on infrastructure and proceeded to address the press in the Rose Garden, demanding Democrats end their “phony investigations” before they can negotiate on infrastructure.

On Twitter Thursday morning, Trump once again accused Democrats of seeking a do-over after Special Counsel Robert Mueller's Russia probe did not turn up evidence of collusion with his 2016 campaign.

“The Democrats are getting nothing done in Congress. All of their effort is about a Re-Do of the Mueller Report, which didn’t turn out the way they wanted. It is not possible for them to investigate and legislate at the same time,” he said. “Their heart is not into Infrastructure, lower drug prices, pre-existing conditions and our great Vets.”

He added: “All they are geared up to do, six committees, is squander time, day after day, trying to find anything which will be bad for me. A pure fishing expedition like this never happened before, & it should never happen again!”

The president’s complaints come amid numerous congressional investigations into a range of Trump-related topics—including access to his financial statements and records and access to an unredacted version of the Mueller report.

That backdrop made for a tense and ultimately failed meeting on Wednesday with Pelosi, D-Calif., and Senate Minority Leader Chuck Schumer, D-N.Y. Just minutes before the sit-down, Pelosi accused Trump of having “engaged in a cover-up” regarding the Russia investigation.

Trump said her comments and the Democratic-led probes prevented them from negotiating.

“You can’t do it under these circumstances,” Trump said. “Get these phony investigations over with.”

Later in the day, Pelosi accused the president of committing an “impeachable offense.”

“The fact is, in plain sight, in the public domain, this president is obstructing justice and he’s engaged in a cover-up,” Pelosi said. “And that could be an impeachable offense.”

At the same time, Pelosi this week has scrambled to tamp down calls from rank-and-file Democrats to launch impeachment proceedings against the president. She held a closed-door meeting Wednesday with the Democratic caucus to discuss their battles with the administration.

The meeting came as top Democrats have steadily ramped up pressure on the Trump administration. On Tuesday, the Justice Department reached an agreement with House Intelligence Committee Chairman Adam Schiff, D-Calif., to turn over some documents related to Special Counsel Robert Mueller's investigation, in a rare de-escalation. But it only came after Democrats issued a subpoena, one of many that congressional Democrats have approved for Trump-related investigations. They've also pursued a contempt citation against Attorney General Bill Barr and could do the same for ex-White House counsel Don McGahn. 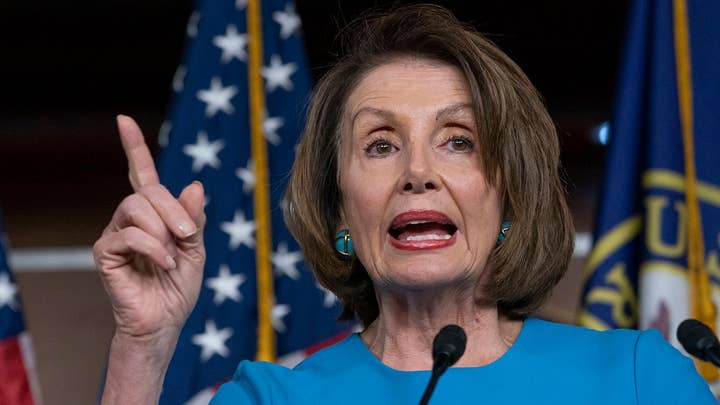 "These are all current examples of progress that was made to get the truth and facts for the American people," Pelosi said, in an apparent attempt to keep Democrats on track with their existing investigations -- and not go the impeachment route.

But as for infrastructure, Schumer accused the president of “looking for every excuse” not to pursue a bipartisan plan.