The president abruptly shut down a policy meeting with Democrat leaders after House Speaker Pelosi accused him of engaging in a cover-up on the Russia probe earlier in the day; John Roberts reports from the White House.

President Trump on Wednesday demanded Democrats end what he called their "phony investigations" before he'll negotiate with them on issues like infrastructure, as he delivered a fiery statement from the Rose Garden after cutting a meeting short with House Speaker Nancy Pelosi and Senate Democratic Leader Chuck Schumer.

The president had met for mere minutes with the two Democratic leaders in a session scheduled to discuss a possible bipartisan infrastructure package. But moments before that sit-down, Pelosi accused Trump of having "engaged in a cover-up" regarding the Russia probe. 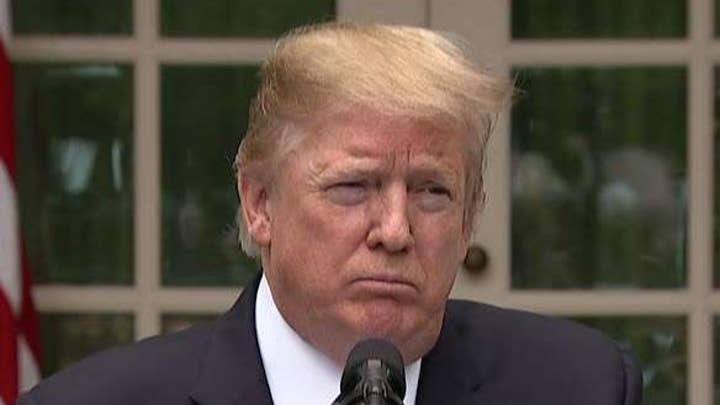 Trump suggested the comments, and the numerous investigations into him, prevented them from negotiating.

“You can't do it under these circumstances,” Trump said. “Get these phony investigations over with.”

The president said he wanted to pursue an infrastructure proposal, but "instead of walking in happily into a meeting, I walk in to look at people that have just said that I was doing a cover-up."

One source told Fox News Trump walked into the Cabinet Room and immediately made his comments to the Democrats in the room. Then, as Pelosi began talking, Trump turned on his heel and walked back to the Oval Office.

Asked what happened during the meeting, a senior House Democratic source told Fox News: “Nothing good.”

Schumer, back at the Capitol, said Trump's decision to bolt the meeting and address the press in the Rose Garden was hardly spontaneous. Speaking alongside Pelosi, he called it a "pre-planned excuse" -- citing the ready-made sign about the Russia probe that Trump had at the podium.

“We are interested in doing infrastructure," Schumer said. "It's clear the president isn't. He is looking for every excuse.”

In later tweets, the president said, "So sad that Nancy Pelosi and Chuck Schumer will never be able to see or understand the great promise of our Country." He also said, "Nancy, thank you so much for your prayers, I know you truly mean it!"

The flare-up comes as top Democrats have steadily ramped up pressure on the Trump administration. On Tuesday, the Justice Department reached an agreement with House Intelligence Committee Chairman Adam Schiff, D-Calif., to turn over some documents related to Special Counsel Robert Mueller's investigation, in a rare de-escalation. But it only came after Democrats issued a subpoena, one of many that congressional Democrats have approved for Trump-related investigations. They've also pursued a contempt citation against Attorney General Bill Barr and could do the same for former White House counsel Don McGahn.

In the Rose Garden, the president stood at a podium displaying a sign that said “no collusion, no obstruction.” He also lashed out at media for their coverage of the Russia probe.

“This whole thing was a takedown attempt at the president of the United States, and honestly you ought to be ashamed of yourselves for the way you reported so dishonestly,” he said. 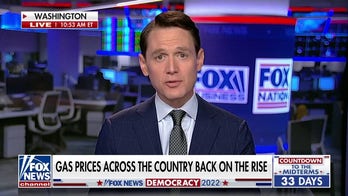 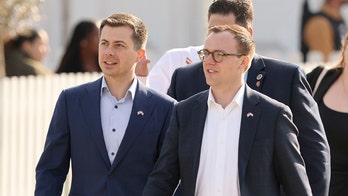