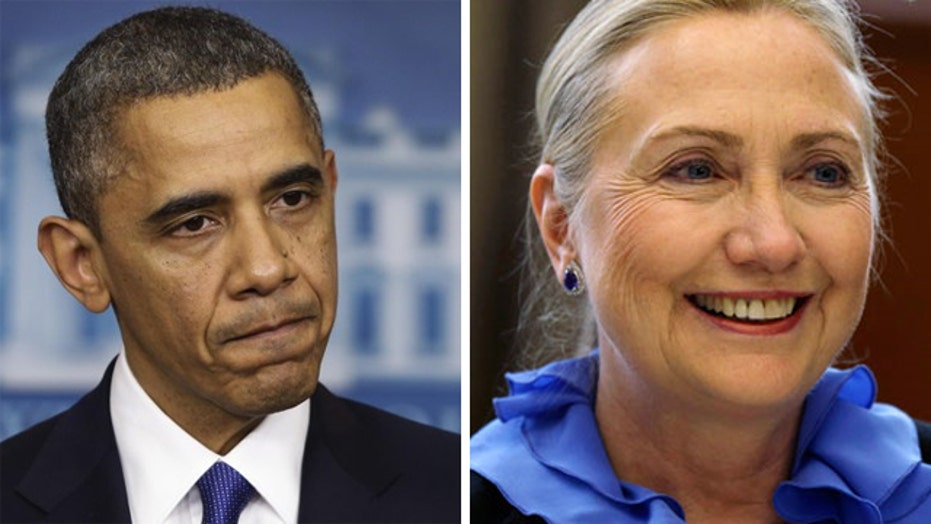 Everyone in the political-media hothouse is now asking the same question about Hillary.

No, not that one. Everyone knows she’s running. We’ve all moved on.

The question is whether she—and her husband—are taking over the Democratic Party. Not in 2016, but right now.

I don’t mean to suggest this is some conspiratorial plot. The Clintons are doing what good Democrats do, campaigning for midterm candidates and getting ready for the horse race that begins in 2015.

But with Barack Obama in the most embattled phase of his presidency, you can feel the center of gravity shifting. Obama is the past. Hillary is both the past and the future.

In politics, perception is power.

Let’s take the long view. From the moment that Bill essentially clinched the nomination after a two-for-the-price-of-one campaign with his wife, in the spring of 1992, the Democrats have been a Clinton party. Hillary was elected to the Senate during his final year, in 2000, even as Al Gore was losing in overtime. The Bush years were a time when Hillary grew in stature and prepared for her inevitable run—until 2007, when a young phenom with a funny name burst into the limelight and then denied her the nomination that many felt was rightfully hers.

Hillary joined the Cabinet, of course, and now it was Obama’s party—but he still needed both Clintons. Bill did his part to rescue the president’s reelection with that charismatic 2012 convention speech that far outshined Obama’s.

Now comes the 2014 midterms, and as a New York Times front-page headline put it, Obama has been benched by his party. Much of the left is disillusioned with the president who promised hope and change. And so even though Hillary is more hawkish, many liberals are now hoping for Hillary.

Perhaps it’s no accident that the tell-alls from two Pentagon chiefs—Robert Gates and now Leon Panetta—were rough on Obama and largely praiseworthy toward Hillary. After all, he’s gone in two years, while she could be moving back into her old quarters.

Dick Morris, a onetime adviser to Bill Clinton, went further in a New York radio interview, saying of Panetta’s book-length criticism of Obama: "I think Hillary put him up to it…What Panetta is doing is a hit — a contract killing — for Hillary. Panetta at core is a Clinton person, not an Obama person. By accurately and truthfully describing the deliberations in the [Obama] cabinet, he makes Hillary look better, and he makes Obama look worse.”

That’s a little conspiratorial, but it’s not hard to think of Panetta, the former White House chief of staff, as more of a Clinton loyalist. Plus, he may just agree with her more than their former boss on foreign policy.

John Heilemann, who with his partner Mark Halperin has moved to Bloomberg News, sees the fall elections as the Bill & Hill Show:

“After more than six years in which Democratic politics have revolved around Barack Obama, the Clintons are aggressively reclaiming what they have long perceived as their rightful position at the center of their party’s universe—a reassertion made all the more vivid and undeniable by the interstellar drift of the current occupant of the Oval Office.

“Nowhere is the Clintons’ assertiveness more apparent than in the coast-to-coast midterm blitzes they each have embarked upon...

“To say that the Clintons are popular and Obama is not simultaneously states the obvious and understates the case. Internal Democratic polling pegs Bill Clinton’s approval rating among undecided voters at north of 50 percent; according to a recent survey, he stands alone among campaign surrogates in his capacity to change minds. And while Hillary is a less broadly potent figure, her popularity and motivational sway with women voters—certainly a, and arguably the, critical swing constituency in many contested Senate races—is significant, as is her fund-raising prowess...

Well, the pendulum has a way of swinging. But political chatter aside, Obama is still commander-in-chief for over two more years.

Meanwhile, the political chatter machine is abuzz over a poll showing Mitt Romney edging Hillary by a point in Iowa. It’s meaningless, since Romney has been out of the game and not subject to attacks, but never mind.

As if on cue, the Washington Post ran another front-pager yesterday about Mitt in 2016:

“He has insisted that he is not interested in running for president a third time. But his friends said a flurry of behind-the-scenes activity is nudging him to more seriously consider it.

“Romney has huddled with prominent donors and reconnected with supporters in key states in recent months. Because of the vacuum of power within his party and the lack of a clear 2016 front-runner, confidants said Romney is grappling with this question: If drafted, would he answer the party’s call?”

Is the Post going to keep running these pieces until Mitt gives in? Two months ago, the paper ran a similar story:

“Romney continues to deny interest in a third presidential run in 2016, but his moves have his supporters yearning for him to give it a go and arguing that he would be a stronger candidate than last time.”

Unfortunately for the Washington Post, Ann Romney was quoted the same day in a Los Angeles Times piece about the prospect of a third run:

But the press isn’t done, not by a long shot.