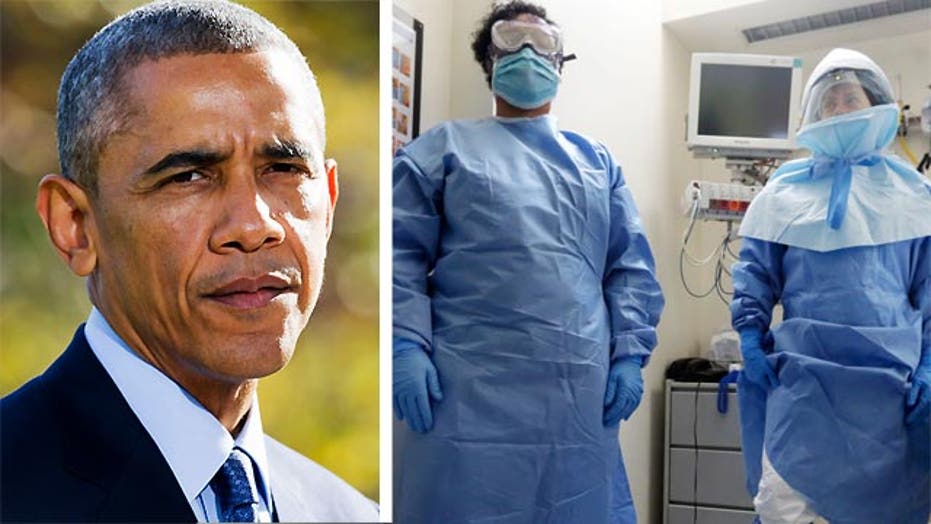 Obama considers treating non-citizens for Ebola in US

A memo obtained by Fox News indicates the Obama administration has been considering allowing non-American Ebola patients into the U.S. for treatment – though a State Department official on Tuesday denied any such plans.

The document was obtained by Fox News from a Capitol Hill source, who said it is a memo prepared by the State Department. The top of the document is marked “sensitive but unclassified – predesicional (sic).”

The “purpose” of the memo states: “Come to an agreed State Department position on the extent to which non-U.S. citizens will be admitted to the United States for treatment of Ebola Virus Disease.”

The document goes on to discuss – and advocate for -- devising such a plan. The memo recommends that “State and DHS devise a system for expeditious parole of Ebola-infected non-citizens into the United States as long as they are otherwise eligible for medical evacuation from the Ebola affected countries and for entry into the United States.”

Explaining that recommendation, the memo says the U.S., for instance, has an “obligation” to help non-citizen employees of U.S. agencies and U.S.-based private firms. It says the U.S. “needs to show leadership and act as we are asking others to act by admitting certain non-citizens into the country for medical treatment for Ebola Virus Disease (EVD) during the Ebola crisis.”

The memo was obtained after House Judiciary Committee Chairman Bob Goodlatte, R-Va., wrote to Secretary of State John Kerry and Homeland Security Secretary Jeh Johnson a week ago asking if either department was formulating a plan to allow non-U.S. citizens with Ebola to come to the U.S. for medical treatment.

Goodlatte also told Fox News Monday night that his office had received "information from within the administration" that such plans were being developed. So far, only American Ebola patients have been brought back to the U.S. for treatment from the disease epicenter in West Africa.

Goodlatte warned that expanding that policy could put the country at more risk.

"Members of the media, my office have received confidential communications saying that those plans are being developed," Goodlatte said Monday night. "This is simply a matter of common sense that if you are concerned about this problem spreading … we certainly shouldn't be bringing in the patients."

The administration, though, has denied planning to do so.

A State Department official said Tuesday that they're only talking about letting other countries use U.S. planes to transport Ebola patients to their own home countries.

"There are absolutely no plans to MEDEVAC non-Americans who become ill from West Africa to the United States," the official told FoxNews.com. "We have discussed allowing other countries to use our MEDEVAC capabilities to evacuate their own citizens to their home countries or third-countries, subject to reimbursement and availability. But we are not contemplating bringing them back to the U.S. for treatment.

"Allegations to the contrary are completely false."

And on Tuesday, White House Press Secretary Josh Earnest was asked about the matter and said “that certainly hasn't happened so far -- I don't know of any plans to do that.”

A Goodlatte aide told FoxNews.com that "someone in one of the agencies" initially contacted their office with the tip.

In his letter last week, Goodlatte asked whether the administration is crafting such a plan, seeking details and communications among their employees.

The conservative watchdog group Judicial Watch also reported, shortly before Goodlatte sent the letter, that the administration was "actively formulating" plans to bring Ebola patients into the U.S., with the specific goal of treating them "within the first days of diagnosis."