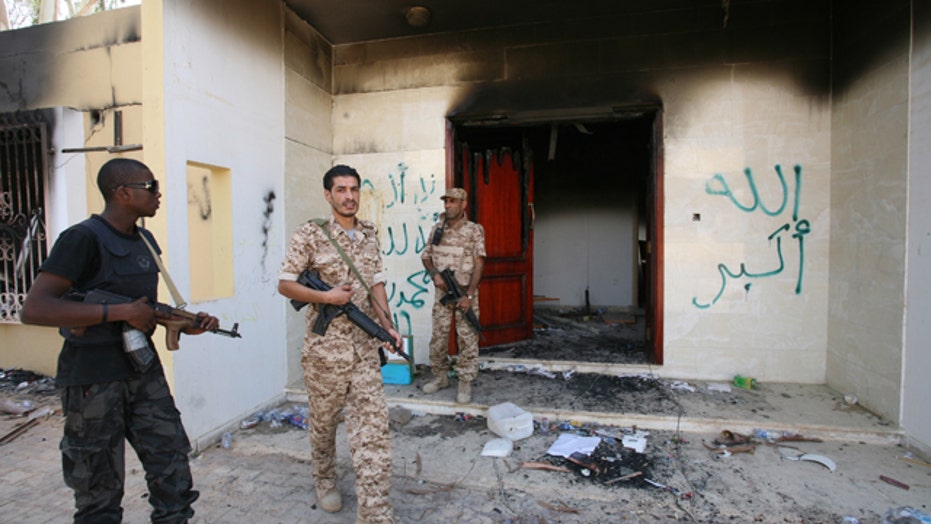 Benghazi Select Committee seeks to 'put together the puzzle'

Rep. Mike Pompeo says mission is 'not about politics'

Allegations that Hillary Clinton allies may have tried to shield the former secretary of State in the wake of the Benghazi terror attack are coming to the forefront ahead of the first public hearing of the special congressional committee probing the attack and its aftermath.

Speaking with Fox News, Rep. Trey Gowdy, R-S.C., chairman of the select committee, on Tuesday made clear he eventually plans to call former acting CIA director Mike Morell to testify – alleging the former boss “intentionally scrubbed” the so-called talking points that were the basis for the administration’s flawed public narrative about the attack.

Gowdy also responded to new and separate allegations from a former State Department official that Clinton confidants hid politically damaging files from the supposedly independent board probing the attack. Gowdy called the allegations “incredibly serious,” but stressed that they are only allegations at this stage.

It is unclear how deeply the hearing on Wednesday might delve into the actions of any of these officials. The topic for the hearing, set for 10 a.m. ET, is the implementation of the recommendations from the independent board, known as the Accountability Review Board.

Among those set to testify are Greg Starr, the department's assistant secretary for Diplomatic Security, and Mark Sullivan and Todd Keil, members of the Independent Panel on Best Practices, created to review the accountability board's efforts.Morell is not part of Wednesday’s hearing.

But the hearing, following weeks of private interviews and investigation, marks the first public airing of the committee’s work.

Gowdy, speaking with Fox News on Tuesday, continued to raise questions about the administration’s claims that murky intelligence initially led them to conclude, wrongly, the attack grew out of a demonstration on the ground over an anti-Islam film. Gowdy said there is “overwhelming” evidence of pre-meditation and “overwhelming” evidence of pre-planning in the 2012 attack, in which four Americans were killed.

Morell was involved in editing the so-called talking points on the attack, and Republicans have long questioned his role. But Morell said in a statement to Fox News earlier this year that “neither the Agency, the analysts, nor I cooked the books in any way."

A CIA spokesman also told Fox News earlier this year that the talking points were originally written for Congress’ purposes and were never meant to be “definitive.”

Gowdy also hinted Tuesday that he will call National Security Adviser Susan Rice and any others with direct knowledge of the administration’s initial statements about the attack.

Meanwhile, Gowdy did not comment in detail on the allegations that Clinton confidants hid politically damaging documents from the ARB.

The account from Raymond Maxwell, former head of the Bureau of Near Eastern Affairs (NEA),was first published in The Daily Signal. Rep. Jason Chaffetz, R-Utah, confirmed to FoxNews.com on Monday that Maxwell told him and other lawmakers the same story when they privately interviewed him last year about the attacks and their aftermath.

Chaffetz said that Maxwell claimed Clinton's chief of staff and deputy chief of staff were overseeing the document operation, which allegedly took place on a weekend in a basement office of the State Department.

"What they were looking for is anything that made them look bad. That's the way it was described to us," Chaffetz said.

According to Chaffetz' account of his interview with Maxwell, as well as the Daily Signal report, Maxwell said those scrubbing the documents were looking for information that would cast Clinton and senior leaders in a "bad light."

Chaffetz said such documents were said to be removed, so that Congress and the Accountability Review Board would not see them.

"That allegation is totally without merit. It doesn't remotely reflect the way the ARB actually obtained information," he said in an email. He explained that an "all-points bulletin"-type request went out department-wide instructing "full and prompt cooperation" for anyone contacted by the ARB, and urging anyone with "relevant information" to contact the board.

"The range of sources that the ARB's investigation drew on would have made it impossible for anyone outside of the ARB to control its access to information," he said.

On Tuesday, Rep. Elijah Cummings, D-Md., top Democrat on the House oversight committee, said Maxwell was interviewed by their committee and never talked about this.

Maxwell was one of four State Department officials disciplined in the wake of the 2012 Benghazi attack. He was put on administrative leave, and has spoken out before about how he felt he was scapegoated.