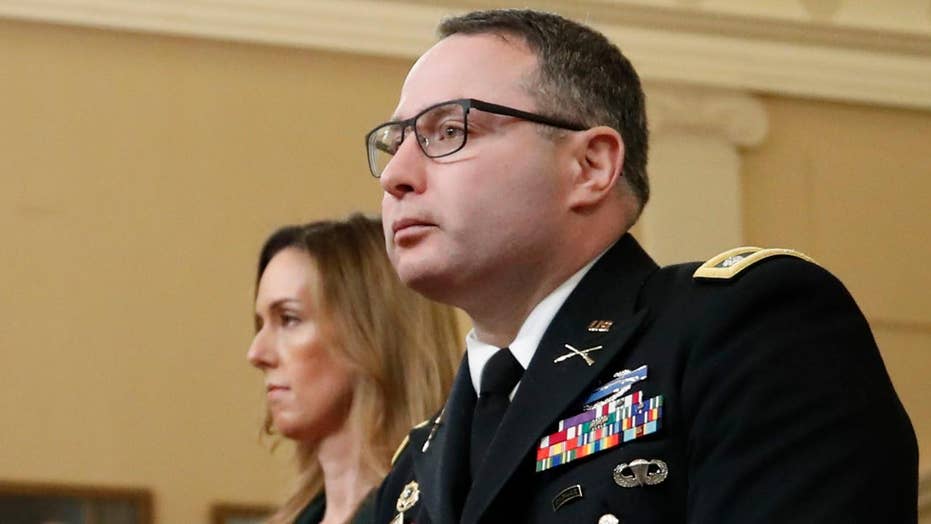 Lt. Col. Vindman's interpretation of the language used by President Trump on his phone call with Ukraine's president is significant, says Martha MacCallum, anchor of 'Story.'

Two White House officials who listened in on President Trump’s July phone call with Ukrainian President Volodymyr Zelensky kicked off a packed week of impeachment hearings Tuesday by describing Trump's pursuit of political investigations from Kiev as "improper" and "unusual" -- as House Republicans railed against the hearings as a “partisan frenzy” and argued the testimony has produced "no evidence" for impeachment.

One of the witnesses, Lt. Col. Alexander Vindman, a National Security Council official, also caused a dustup by acknowledging communications with an unnamed intelligence official during an at-times tense exchange with Republicans.

Vindman said he spoke with two people outside the White House about the July 25 call, including State Department official George Kent and the unnamed intelligence community official, immediately raising apparent questions over whether he could have been a source of information for the anonymous whistleblower who reported the call. He said both individuals are "cleared U.S. government officials with the appropriate need to know.”

Intelligence Committee Chairman Adam Schiff, D-Calif., interjected to express concern that Republicans were trying to out the whistleblower through the questioning. After consulting his attorney, Vindman said, "Per the advice of my counsel, I’ve been advised not to answer the specific questions about members of the intelligence community."

Still, Vindman told lawmakers, “I do not know who the whistleblower is.”

The tension between Vindman and Republicans was evident after the revelation: at one point, when California Rep. Devin Nunes, the top Republican on the committee, called him “Mr. Vindman,” the witness replied, "it's Lt. Col. Vindman."

The impeachment inquiry has focused on a possible link between military aid to Ukraine and investigations sought by Trump pertaining to the Bidens and Democrats. The questions arose after a July 25 phone call between Trump and Zelensky led to a whistleblower complaint alleging that Trump was trying to pressure Ukraine into helping him.

At one point, Vindman described his reaction to Trump’s call as one of “shock.” “Frankly, I couldn’t believe what I was hearing,” he testified. “In certain regards, my worst fear of how our Ukraine policy could play out was playing out.”

Vindman, who reported his concerns about Trump's call to the NSC lawyer, described Trump's request as a "demand" and told lawmakers he believed if Ukraine pursued the investigations, it “would be interpreted as a partisan play.” He also emphasized that he reported his concerns “out of a sense of duty.”

The White House downplayed the hearing, though, as a debate over two individuals’ personal opinions about a call that Americans can read for themselves. During the hearing, Trump tweeted a video calling the inquiry a "charade." He also spoke to reporters at the White House, saying, "Republicans are absolutely killing it. Because it’s a big scam.” He added: "What’s going on is a disgrace."

Vindman said that since the July 25 phone call, he believes he has been “excluded” from meetings at the White House that would have been appropriate for his position. “I was concerned by the call. What I heard was inappropriate,” Vindman testified. He also said, “It is improper for the president of the United States to demand a foreign government investigate a U.S. citizen and a political opponent.”

In another revelation, Vindman said Oleksandr Danylyuk, Zelensky's former national security adviser, asked Vindman to be the defense minister in Ukraine on a number of occasions, including three times around the time of the inauguration.

Vindman called the request "comical" and said he didn't leave the door open on the offer. "Every single time I dismissed it," he said, adding that he notified the chain of command back home.

Meanwhile, the other morning witness, Vice President Pence aide Jennifer Williams, also expressed concern about Trump's call with Zelensky, saying, “I found the July 25th phone call unusual because, in contrast to other presidential calls I had observed, it involved discussion of what appeared to be a domestic political matter.” Williams, a State Department official assigned to Pence's office, said she inserted the White House's readout of the call in Pence's briefing book.

In his opening remarks, the top Democrat on the panel, Schiff, defended both witnesses against recent attacks, telling Williams “we all saw the president’s tweet about you on Sunday afternoon” accusing her of being a “Never Trumper.” Williams later rejected that term, under questioning Tuesday.

When Vindman was asked if he's a "Never Trumper," he described himself as "Never partisan."

Addressing Vindman -- who wore his Army uniform to Tuesday's hearing -- Schiff said, “I note that you have shed blood for America, and we owe you an immense debt of gratitude.” Vindman referenced his family’s history of moving from the Soviet Union to the United States 40 years ago, saying appearing for testimony in Russia would “surely cost me my life.” But addressing his father, Vindman said today, “Do not worry, I will be fine for telling the truth.”

At another point, Vindman testified that he knew he was "taking a risk" by speaking about the Trump call. "This is America. Here, right matters," he said to applause from some in the room.

Republicans on the committee dismissed the testimony, with Nunes calling the Democrat-led inquiry a “partisan frenzy" while blasting the media coverage over what he called a "fevered rush to tarnish and remove" Trump. He referenced recent media reports that Democrats have shifted the wording they use to describe the allegations against the president from “quid pro quo” to “bribery” after conducting focus groups with voters. At the end of the hearing, he said there was "no evidence" presented for impeachment.

GOP Rep. Jim Jordan, at another point, told Schiff "no one believes" him when he says he doesn't know who the whistleblower is.

Vindman is viewed as a key witness for Democrats. In his testimony, Vindman has said he recalled U.S. Ambassador to the EU Gordon Sondland saying during White House meetings on July 10 that Ukrainians would have to deliver an investigation into the Bidens to receive the aid.

Hunter Biden was a board member of Ukrainian energy company Burisma Holdings, which had been under investigation before then-Vice President Biden pressured Ukraine to fire the prosecutor in charge.

Until Tuesday, none of the witnesses who have testified at the public hearings had first-hand knowledge of the president's thinking, which Republicans have used to cast doubt on Democrats' allegations. But Vindman, Williams, and Morrison all listened in on Trump's July 25 phone call.