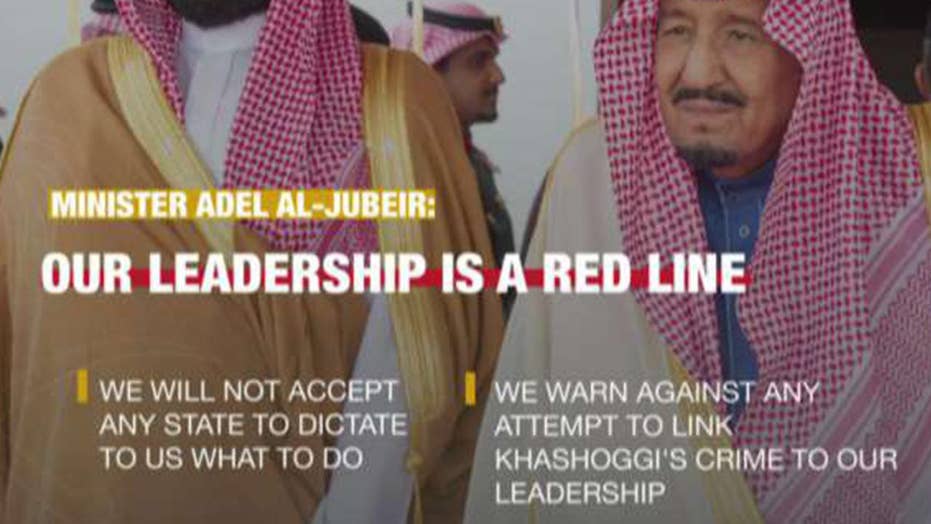 Saudi Arabia threatens US over investigations into Khashoggi killing

Charlie Kirk breaks it down.

House Republicans joined with Democrats on Wednesday in a bipartisan rebuke of President Trump's support for Saudi-led military involvement in Yemen -- a new GOP revolt over the administration's foreign policy that underscored the continuing unease in Congress over the murder of Washington Post contributor Jamal Khashoggi.

Buoyed by the support of more than a dozen Republicans, the House voted 248-177 to approve a resolution calling for the Pentagon to pull U.S. troops from Yemen and cease support for the Saudis there. The proposal is now headed to the GOP-controlled Senate, where a similar resolution passed last year.

The move sets up a showdown with the White House, which has threatened to veto the measure. A two-thirds supermajority of both chambers would be needed to override such a veto.

The Saudi-spearheaded military intervention in Yemen against Iranian-backed Houthi rebels, which began in 2015, has received significant logistics and financial support from the U.S. military. Last year, the U.S. suspended the costly practice of providing midair refueling to Saudi planes in exchange for partial reimbursements, but the U.S. has continued to provide arms, intelligence and other resources.

U.S. involvement in the country has produced some high-profile results. On New Year's Day this year, Jamal al-Badawi, the Al Qaeda operative tied to the deadly 2000 attack on the American vessel Cole, was killed during a U.S. airstrike in Yemen. U.S. Central Command confirmed that the operative, who was in hiding since 2006, was killed in a "precision strike in Marib Governate."

But lawmakers in both parties are increasingly uneasy over the humanitarian crisis in Yemen and skeptical of the U.S. partnership with that coalition, especially given evidence of Saudi Arabia's role in the murder of Khashoggi, a critic of the royal family.

The Houthis have inducted 18,000 child soldiers into their rebel army since the beginning of the war in 2014, according to a senior Houthi military official. The United Nations was able to verify 2,721 children recruited to fight for all sides in the conflict, the large majority for the Houthis.

Republicans largely opposed the resolution, saying it was nonsensical.

"U.S. armed forces are not engaged in hostilities" in Yemen, GOP Rep. Michael McCaul, the ranking member on the House Foreign Affairs Committee, said Thursday, asserting that the resolution calls for removing troops "that simply are not there."

Also on Wednesday, though, a Republican-proposed resolution providing that the U.S. should continue to share intelligence with "any foreign country" passed overwhelmingly, 252-177. The mixed signals caused apparent consternation among liberal watchdog groups.

“The Senate will now have to clean up the legislative mess passed by the House," Christopher Anders, deputy director of the American Civil Liberties Union’s legislative office, told Fox News. "In a resolution that could have been used to shut down all American support for the Saudi-led bombing campaign in Yemen, the House instead caused more problems than it solved.

“The House declined to clean up confusing language that will likely result in the Trump administration claiming that it does not have to change anything it is now doing in support of the Saudis in Yemen," Anders continued. "And in a harmful move, the House passed an amendment that seems to say that President Trump has almost unfettered authority to share intelligence about Yemen with a Saudi Arabian government that has been credibly accused by United Nations experts of committing horrific war crimes in Yemen.”

The White House has shown little interest in congressional efforts to influence its foreign policy. Late last year, Sens. Bob Corker, R-Tenn., and Bob Menendez, D-N.J., issued a letter to the White House pursuant to the terms of the Global Magnitsky Act, triggering a requirement that the president determine within 120 days whether the Saudi crown prince, Mohammed bin Salman, was responsible for Khashoggi's killing. The White House declined to meet that deadline.

Senate passage of Thursday's resolution would mark the first time Congress has relied on the decades-old War Powers Resolution to halt military intervention. It also would set up a potential confrontation with the White House, which has threatened a veto.

"We have helped create, and worsen, the world's largest humanitarian crisis," said Rep. Barbara Lee, D-Calif., during the debate. "Our involvement in this war, quite frankly, is shameful."

Senate approval would set up a showdown with the administration over Trump's shifting approach on foreign policy.

Lawmakers are quick to point out that Trump wants to withdraw troops from the wars in Syria and Afghanistan as part of his "America First" approach, but has shown less interest in limiting the U.S. role in Yemen.

The White House says the House resolution is "flawed" because U.S. troops are not directly involved in military action in Yemen, where the coalition is fighting the Iranian-backed Houthi rebels in a conflict largely seen as a proxy tussle nvolving the Mideast's dominant regional players.

CHILDREN AS YOUNG AS 10 FIGHT, AND DIE, IN YEMEN'S WAR

Congress has not invoked the War Power Resolution, which requires approval of military actions, since it was enacted in 1973. Lawmakers approved more sweeping authorizations for the wars in Iraq and Afghanistan that some argue are being used too broadly for other military actions.

Newly emboldened Democrats in the House eager to confront Trump on foreign policy, and Republicans in both chambers have shown a willingness to put a legislative check on the president's agenda.

"It's not just about Yemen. It's about the Congress taking a stand and every future president having to think twice about whether to authorize a military intervention without congressional approval," Khanna said in an interview.

"It's not just about Yemen. It's about the Congress taking a stand."

Before Wednesday's vote, the House overwhelmingly agreed to add an amendment offered by Republicans working to expose emerging Democratic divisions over support for Israel.

The amendment reaffirms the U.S. commitment "to combat anti-Semitism around the world" and says it's in America's national security interest to oppose boycotts of Israel. That's a reference to the Boycott, Divest and Sanction movement that has gained support of some lawmakers.

First-term Rep. Ilhan Omar, D-Minn., a Muslim-American women elected to Congress, came under criticism this week for her comments against the Israel lobbying organization AIPAC that raised anti-Semitic stereotypes, including one in which she said the U.S. relationship to Israel was "all about the Benjamins, baby." She later apologized.

Lawmakers pass a resolution calling on the U.S. to end military assistance for the Saudi-led coalition's war in Yemen under the belief that Crown Prince Mohammed bin Salman is responsible for the murder of Jamal Khashoggi; correspondent Peter Doocy reports.

Trump and Vice President Mike Pence have each called Omar's apology insincere. Earlier on Wednesday, Omar clashed with Trump administration's new special envoy for Venezuela, Elliott Abrams, asking him whether he approved of a 1981 massacre in El Salvador -- prompting Abrams to call the line of questioning "ridiculous."

Now the Yemen measure goes to the Senate, which where a similar resolution on removing U.S. involvement in the war was approved with Republican support late last year.

At the time, Congress was eager to send a message to both the president and the Saudis after the October murder of the U.S.-based journalist Khashoggi at the Saudi Consulate in Istanbul.

The U.S. has sanctioned 17 Saudi individuals for their involvement in the killing, and U.S. intelligence officials have concluded that bin Salman, must have at least known of the plot. Trump so far has decided not to impose harsher penalties on the prince. The kingdom insists he did not order the killing.

The president has yet to veto any measures from Congress. If he did veto the Yemen resolution, it's unclear whether lawmakers would have enough support to override him.