Saudi public prosecutor says columnist Jamal Khashoggi was killed at the Saudi consulate in Istanbul in a fight; 18 Saudi nationals have been arrested so far.

Jamal Khashoggi, the missing activist and writer last seen entering the Saudi Consulate in Turkey on Oct. 2, was killed in a fight, Saudi state media reported on Friday.

“Discussions between citizen Jamal Khashoggi and those who met him while he was in the Saudi Consulate in Istanbul led to a brawl and a physical altercation, which led to his death,” Saudi Arabia's attorney general said in a statement, according to The Wall Street Journal. The announcement of Kashoggi's death followed the preliminary findings of a probe into what happened to the activist.

State media also quoted prosecutors as saying 18 Saudi nationals are being held on suspicion of being involved in the Washington Post columnist's death. Saudi state media also said a royal court adviser close to Saudi Crown Prince Mohammed bin Salman (MBS) was fired along with three leaders in the kingdom's intelligence services and other officials.

The statements did not identify the 18 Saudis being held by authorities.

The announcement comes after President Trump on Thursday said it "certainly" looked like Khashoggi was dead. The president didn't elaborate on his conclusion but he said the consequences for Saudi Arabia "will have to be very severe" if it's ultimately found responsible for Khashoggi's death.

Later Friday night Trump said that Saudi Arabia's announcement of arrests was a "good first step," but that what happened there is "unacceptable."

The president, who called Kashoggi's death a "horrible event" that has not gone "unnoticed," said he'd work with Congress on what the U.S. response should be, but that he'd prefer not to hurt American companies and jobs by cutting billions of dollars in arms sales to the kingdom.

“The United States acknowledges the announcement from the Kingdom of Saudi Arabia that its investigation into the fate of Jamal Khashoggi is progressing and that it has taken action against the suspects it has identified thus far," White House press secretary Sarah Sanders said in a statement. "We will continue to closely follow the international investigations into this tragic incident and advocate for justice that is timely, transparent, and in accordance with all due process. We are saddened to hear confirmation of Mr. Khashoggi’s death, and we offer our deepest condolences to his family, fiancée, and friends.” 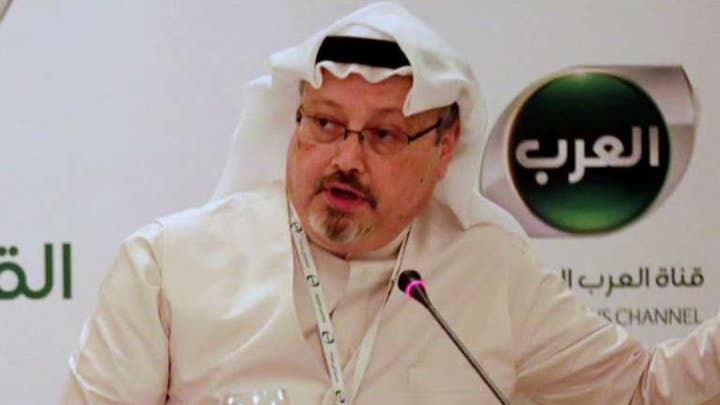 Khashoggi, who had written critically of MBS, disappeared two weeks ago during a visit to the Saudi Consulate in Istanbul. Turkish officials said they feared he was killed and dismembered inside the consulate.

During a meeting with Secretary of State Mike Pompeo earlier this week, Saudi leaders -- including King Salman and the crown prince -- "strongly denied any knowledge of what took place in their consulate in Istanbul," Pompeo said. That denial was backed by President Trump prior to Friday's revelation.

Investigators on Friday had questioned staff from the Saudi Consulate about the disappearance of Khashoggi and explored whether his remains could have been dumped outside Istanbul after his suspected killing, Turkish media and a security official said.