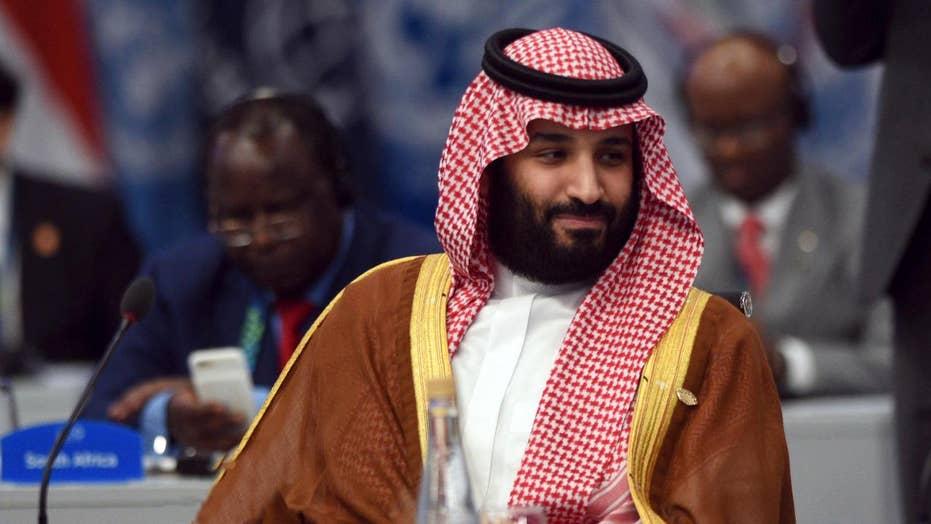 A bipartisan group of six senators introduced a nonbinding resolution Wednesday stating that Saudi Crown Prince Mohammed bin Salman was "complicit" in the October killing of activist Jamal Khashoggi at the kingdom's consulate in Istanbul.

The resolution says that the Senate believes the crown prince, known informally as "MbS," "was in control of the security forces at the time of Jamal Khashoggi's murder" and "based on evidence and analysis made available to this institution, has a high level of confidence" in his complicity in the Oct. 2 murder.

"I hope to have a definitive statement by the United States Senate that the crown prince of Saudi Arabia has been generally a wrecking ball in terms of behavior and that he was complicit in the murder of Mr. Khashoggi because I think that's the truth," Graham told reporters Wednesday evening. "And I think if the Senate can make that statement, it puts us on a new path to trying to have a relationship with Saudi Arabia that is beneficial and sustainable.

Tensions mount on Capitol Hill over U.S. handling of Khashoggi death; Sen. Lindsey Graham weighs in on 'The Story.'

"The current construct is not sustainable," Graham added. "There is no way we're gonna continue to do business with Saudi Arabia as if this never happened."

The measure was introduced one day after CIA Director Gina Haspel briefed a group of key senators about the agency's findings in the Khashoggi matter. Graham, who attended the briefing, told reporters afterward that there was "zero chance" the crown prince wasn't involved in Khashoggi's death.

"There's not a smoking gun. There's a smoking saw," Graham said, referring to reports from the Turkish government that said Saudi agents used a bone saw to dismember Khashoggi after he was killed in the Istanbul consulate, where he had gone to obtain paperwork enabling him to marry his fiancee.

The resolution also calls on the Saudi government to release several political prisoners, including women's rights activists and blogger Raif Badawi, who has been held by the kingdom since 2012. The resolution also calls on Riyadh to negotiate with representatives of the Houthi movement in Yemen in an effort to end that country's bloody civil war and subsequent humanitarian crisis.

Protests in the Middle East could be a preview of what's to come at the G20; Greg Palkot reports.

Last week, the Senate overwhelmingly voted to move forward on a resolution curtailing U.S. backing for the Saudi-led war in Yemen. They did so against the advice of Secretary of State Mike Pompeo and Defense Secretary Jim Mattis, who said U.S. involvement in the Yemen conflict is central to the Trump administration's broader goal of containing Iranian influence in the Middle East. Human rights groups say the war is wreaking havoc on the country and subjecting civilians to indiscriminate bombing.

Senate Foreign Relations Committee Chairman Bob Corker, R-Tenn., said Tuesday that senators are trying to figure out how to amend the resolution, which directs the president to remove most U.S. armed forces from hostilities affecting Yemen. He said finding a compromise will be difficult because some lawmakers don't want to tie Yemen to the Khashoggi killing.

President Trump has equivocated about assigning blame for Khashoggi's killing, frustrating lawmakers from both parties.

Senate looks to pull US support for Saudi forces in Yemen

Senate responds to Trump's support of Saudi Arabia with a bill that would pull U.S. support from Saudi-led forces fighting in Yemen; Lt. Col. Bob Maginnis weighs in.

"It could very well be that the crown prince had knowledge of this tragic event," Trump said in a lengthy statement Nov. 20. "Maybe he did and maybe he didn't!"

The president has touted Saudi arms deals worth billions of dollars to the U.S. and recently thanked Saudi Arabia for plunging oil prices.

"They have been a great ally in our very important fight against Iran," Trump said in the statement. "The United States intends to remain a steadfast partner of Saudi Arabia to ensure the interests of our country, Israel and all other partners in the region."

While acknowledging the country's long relationship with Saudi Arabia, senators have said the murder can't be excused.

In a column for The Wall Street Journal on Tuesday, Graham wrote that the killing and other moves by the Saudi regime showed "astounding arrogance entitlement" and disregard for international norms.

"We are a coequal branch of government exercising leadership to safeguard the country's long-term interests, values and reputation," wrote Graham, a frequent ally of the president, of the Senate. "After all, someone's got to do it."