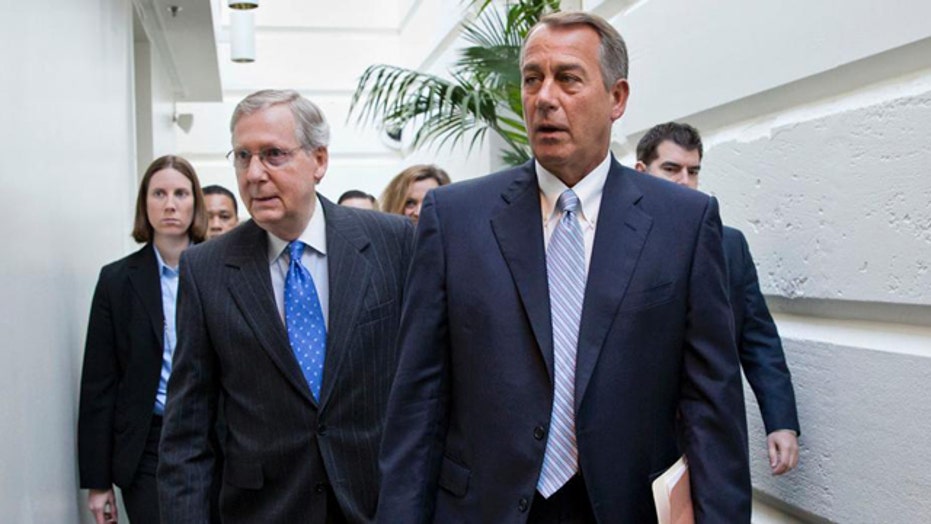 Thomas Basile and Basil Smikle Jr. on the chances Congress will pass a deal

The GOP-led House Appropriations Committee released the plan, which would keep most of the government funded through September 2015, following days of backroom negotiations.

The government technically runs out of money at midnight Thursday. The narrow window raises the likelihood that lawmakers will have to pass a stopgap spending bill to buy time.

The main spending bill next will go to the chamber’s rules committee to be prepared for debate and a likely full House vote by Thursday.

The bill finances the day-to-day operations of every Cabinet department except Homeland Security through Sept. 30, 2015, with $521 billion for defense and $492 billion tied to non-defense. Another $64 billion is provided for overseas military operations.

However, the plan would only fund the Department of Homeland Security through Feb. 27, 2015. That is a move by House GOP leaders to tee up a debate in early 2015 over the president's recent executive action that could suspend deportation for as many as 5 million illegal immigrants.

Some conservatives nevertheless want to wage that battle now, and use the current spending bill as leverage. Though the House voted last week against Obama's immigration plan, these lawmakers want to do more.

"I feel like the leadership is asking us to punt on first down," Rep. Mo Brooks, R-Ala., said Wednesday.

Rep. Matt Salmon, R-Ariz., said he thinks over 50 lawmakers, including himself, are opposed to the bill.

House Speaker John Boehner, though, defended the package and stressed that they'd revisit the immigration issue next year.

"Without a threat of a government shutdown, this sets up a direct challenge to the president's unilateral actions on immigration when we have new majorities in both chambers of Congress," he said Wednesday.

Strong opposition to the House budget plan from the Republicans’ conservative wing could force GOP chamber leaders to rely on Democratic votes to avert a government shutdown. Boehner can afford to lose only 17 caucus votes before he must turn to support from House Democratic Leader Nancy Pelosi.

Pelosi, D-Calif., has said her party would be willing to help but has signaled she may make some demands.

Among those expected to vote against the bill is South Carolina GOP Rep. Mike Mulvaney.

“I don’t think we've proven to people who just re-elected us that we’re doing everything that we can,” he told Fox News on Tuesday before the bill was released. “Now we’re going to fund the emperor [President Obama] without putting up a fight? That’s hard for me to swallow.”

On the Senate side, conservatives such as Sens. Ted Cruz, R-Texas; Mike Lee, R-Utah; and Jeff Sessions, R-Ala., could create problems in passing the bill.

They have pushed for an aggressive attack plan over Obama's immigration actions. If any chooses to filibuster, it could draw out the process, potentially pushing debate into the weekend -- requiring Congress to either pass a stopgap funding bill or risk at least a short partial shutdown.

Senate Republican aides said Monday that they didn’t expect their bosses to fight in a way that risks a partial shutdown. They suggest that the timing, with the Senate not expected to take a crack at the bill until Thursday or later, makes it difficult to launch a major fight.

"It cuts against us," one Republican Senate aide said. "Leadership has played its hand very well."

Another top aide for a conservative senator said the battle comes down to how much the outside groups want to engage and “there's not a lot we can do."

The spending bill unveiled Tuesday night provides billions at all levels of government.

The budget provides $490 billion to the Pentagon, increasing its budget by $3.3 billion. It provides billions to continue air strikes against ISIS and train Iraqi forces.

Obama received $5.4 billion of his $6.2 billion request to fight Ebola at home and abroad. Most of it goes to Heath and Human Services and the CDC to help strengthen public health system in at-risk countries.

The FBI would see an increase in its budget to $8.4 billion, while NASA receives $18 billion, a $364 million increase.

More provisions would allot $82 billion for food stamps and another $6.6 billion for a program that provides food aid to pregnant and nursing mothers and their young children.