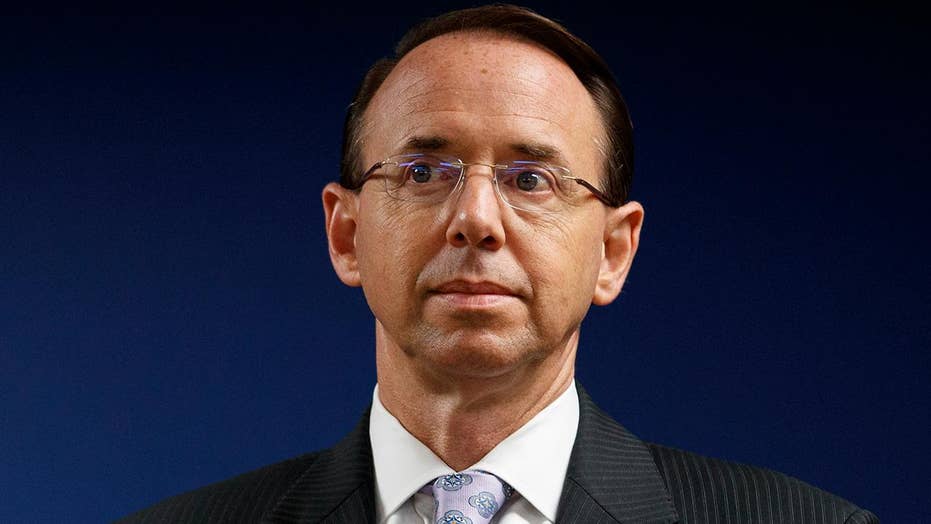 House committees say they are unable to ask all the questions they want to in the time allotted; Rep. Darrell Issa reacts.

The heads of two House committees announced Tuesday evening that a planned Wednesday interview of Deputy Attorney General Rod Rosenstein had been postponed.

Judiciary Committee Chairman Bob Goodlatte, R-Va., and Oversight and Government Reform Committee Chairman Trey Gowdy, R-S.C., said in a joint statement that they were "unable to ask all questions of Deputy Attorney General Rod Rosenstein within the time allotted for tomorrow’s transcribed interview." They added that Rosenstein has indicated a willingness to testify "in the coming weeks in either a transcribed interview or a public setting.

"We appreciate his willingness to appear and will announce further details once it has been rescheduled," the statement concluded.

Rosenstein was to have been interviewed by Goodlatte, Gowdy and the top Democrats on each committee in a secure room, with a transcript to be made public later. Many of the questions were to focus on reported remarks by Rosenstein in which he suggested secretly recording President Trump and canvassing members of the Cabinet about the possibility of removing him from office.

Rosenstein called the initial report about his remarks by The New York Times "inaccurate and factually incorrect." A source in the room at the time later told Fox News that the deputy attorney general's remark was considered "sarcastic."

In response to the report last month, Goodlatte said lawmakers "need to get to the bottom of these very serious claims." Other Republicans, including House Freedom Caucus chairman Mark Meadows, have called for Rosenstein to resign.

Democrats have claimed the focus on Rosenstein is part of a Republican effort to undermine special counsel Robert Mueller's investigation into possible coordination between Russia and the Trump campaign during the 2016 presidential election. Because of Attorney General Jeff Sessions' recusal, Rosenstein appointed Mueller as special counsel and oversees that investigation.