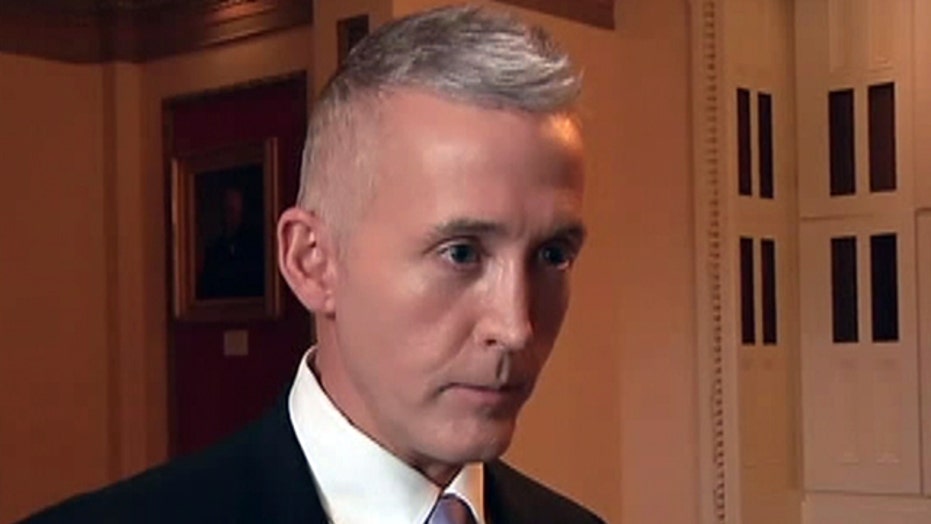 Inside the Benghazi committee's subpoena of Hillary's emails

Before the Benghazi Select Committee filed a subpoena for Hillary Clinton's personal emails, Chairman Trey Gowdy spoke out to Greta

A House committee subpoenaed former Secretary of State Hillary Clinton's personal emails on Wednesday as part of its probe into the 2012 Benghazi terrorist attacks.

The move comes two days after a bombshell report revealed that the likely 2016 presidential candidate did not use her official account to conduct State Department business, a potential violation of federal law, raising questions over why she went to such lengths to keep her messages off the official government system.

The House Select Committee on Benghazi, led by Rep. Trey Gowdy, R-S.C., issued the subpoenas, and also sent letters to Internet companies informing them of "their legal obligation to protect all relevant documents."

So far, Clinton has turned over 55,000 pages of emails. Of that number, 300 are related to Benghazi.

White House Press Secretary Josh Earnest, peppered with questions on the controversy for the second day in a row, told reporters it was "clear that Secretary Clinton's team has gone to great lengths" to collect and turn over emails and said Clinton's actions seemed consistent with the Federal Records Act.

But he also reiterated that the administration gave "very specific guidance" that employees should use official accounts when conducting government business. Clinton did not do that. The New York Times first reported that she used a personal email account on a non-government server to conduct State Department business.

A subsequent Times report noted this practice allowed her to shield some messages from investigators and the public. The Associated Press also reported she was operating on an Internet service registered to her family home in New York.

The email controversy is raising new credibility issues for Clinton going into the 2016 presidential race. Clinton has not officially confirmed a run, but she is widely expected to enter, and be the Democratic front-runner.

The White House has deferred to the State Department on whether any laws were broken. While Earnest said employees are supposed to use official accounts, he clarified “when there are situations where personal email accounts are used, it is important for those records to be preserved, consistent with the Federal Records Act.”

The practice, however, could in the short term complicate records requests.

Judicial Watch President Tom Fitton claims Clinton’s use of a personal email account to conduct official business “may impact nearly a dozen of our Freedom of Information Act lawsuits now active in federal courts as well as dozens of pending FOIA requests.”

The Foundation for Accountability and Civic Trust, a watchdog group, says it “intends to pursue every legal option” to obtain Clinton’s correspondence conducted while she was a senior member of President Obama’s administration.

Matthew G. Whitaker, a former U.S. Attorney in Iowa and the executive director for the Washington-based group, said his organization plans to file a FOIA as well as a request with the attorney general’s office to retrieve all State Department records, including Clinton’s emails.

“We will not rest until transparency has been achieved and proper disciplinary consequences, if warranted, are rendered,” Whitaker said in a written statement.

Clinton representatives, though, have defended the former secretary of state. One Clinton aide told Fox News she was not bucking the system, and in fact was keeping with what former secretaries of state had done, including Colin Powell. The aide stressed that Clinton quickly responded to the request from the department for her emails, following updated guidance from the government's central records office.

In the latest detail to emerge, The Associated Press reported overnight that the computer server that transmitted and received Clinton's emails -- on a private account she used exclusively for official business when she was secretary of state -- traced back to an Internet service registered to her family's home in Chappaqua, New York.

The highly unusual practice of a Cabinet-level official physically running her own email would have given Clinton impressive control over limiting access to her message archives. It also would distinguish Clinton's secretive email practices as far more sophisticated than some politicians, including Mitt Romney and Sarah Palin, who were caught conducting official business using free email services operated by Microsoft Corp. and Yahoo Inc.

Most Internet users rely on professional outside companies, such as Google Inc. or their own employers, for the behind-the-scenes complexities of managing their email communications. Government employees generally use servers run by federal agencies where they work.

In most cases, individuals who operate their own email servers are technical experts or users so concerned about issues of privacy and surveillance they take matters into their own hands.

Clinton has not described her motivation for using a private email account -- hdr22(at)clintonemail.com, which traced back to her own private email server registered under an apparent pseudonym -- for official State Department business.

Operating her own server would have afforded Clinton additional legal opportunities to block government or private subpoenas in criminal, administrative or civil cases because her lawyers could object in court before being forced to turn over any emails. And since the Secret Service was guarding Clinton's home, an email server there would have been well protected from theft or a physical hacking.