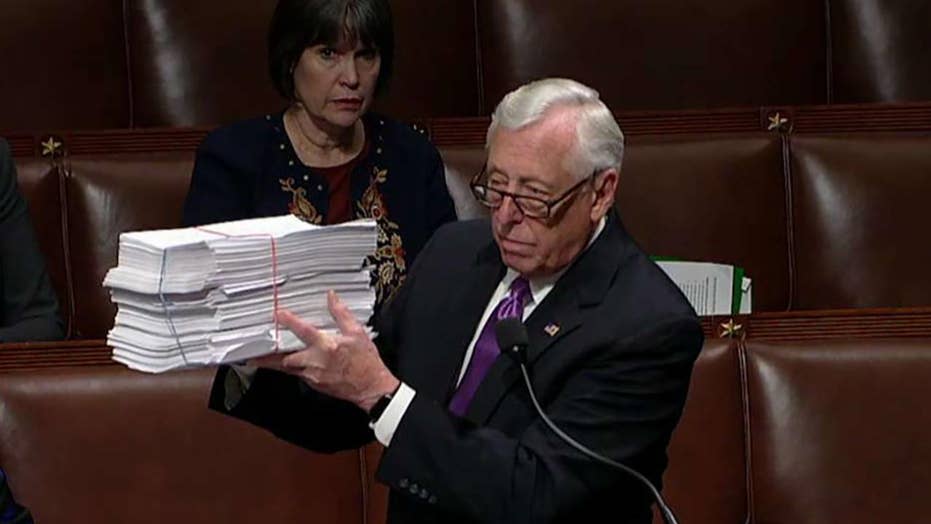 The House approved Thursday a bipartisan $1.3 trillion measure upping spending to the military and a host of domestic projects -- including some limited funding for border security but no legislative fix for the Deferred Action for Childhood Arrivals (DACA) program.

The vote passed 256-167 in the House, despite objections from a number of conservative Republicans who were unhappy with the budget costs of the 2,232-page measure and because it was put out with so little time to be digested.

Many conservatives also objected to the limited border funding, which they said was mostly limited to the repairing of already-existing barriers and limited to 2017 prototypes. The measure also did not defund sanctuary cities or Planned Parenthood.

"[The bill] funds sanctuary cities, funds Planned Parenthood, restricts second amendment liberties and grows the government on a one-point-trillion dollar price tag on this legislation which will lead to a trillion dollar deficit," Rep. Jim Jordan, R-Ohio, said on Fox and Friends.

The measure seems likely to pass in the Senate, given its support from Democrats, although it is unclear on the timing and whether the Senate will be able to process the bill by Friday night, when the government will shut down.

The White House gave firm but limited support to the bill. President Trump grumbled that they had to "waste money on Dem giveaways" on Twitter, but hailed the increase in military spending.

Democrats, meanwhile, claimed victory in placing limits on immigration measures and the wall -- particularly the nixing of a White House request to add more detention beds and deportation officers.

But they also expressed disappointment that a fix for DACA -- which granted protection to illegal immigrants brought to the country as children -- was not included. Democrats had blocked a spending bill in January over the issue, and the government had temporarily shut down.

Rep. Jordan: It can't get any worse than this spending bill

On 'Fox & Friends,' Republican congressman from Ohio explains why he is voting against the spending bill.

Both the White House and Democrats approved of a spending boost for infrastructure, as well as a $4.6 billion increase in funding to stop the opioid epidemic.

Democratic leaders also pointed to spending increases on biomedical research and child care, as well as funding for infrastructure that could be used for the Gateway Tunnel project between New York and New Jersey.

"This spending agreement brings the era of austerity to an unceremonious end," Senate Minority Leader Chuck Schumer, D-NY, said at a press conference.