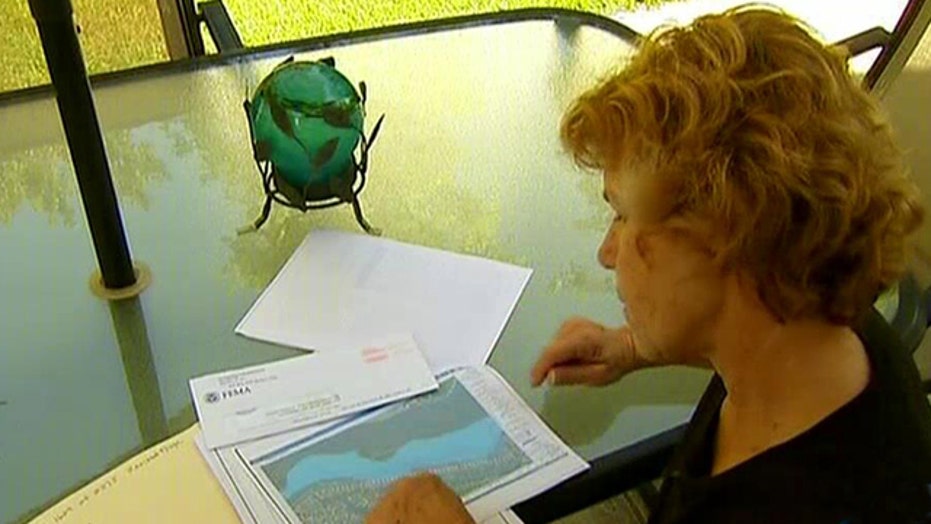 Homeowners across the country say they are drowning in unnecessary flood insurance bills -- due to errors in the Federal Emergency Management Agency's redesigned flood maps.

In 2012, FEMA began updating its outdated paper inventory of maps with new digital ones. Millions of homes ended up in newly drawn high-risk flood zones, including houses built on high ground and away from water. As a result, homeowners with mortgages from federally regulated or insured lenders within these high-risk zones were required by law to carry additional flood insurance.

San Diego resident Laura Clemons is just one of thousands of homeowners who got the surprising news last year, when she was told that her home, on top of a hill, had suddenly moved into a high-risk flood zone.

"I got a letter from my mortgage company, telling me I was going to have to pay flood insurance, which was a joke because I live across the street from a canyon," Clemons said. "They gave us three months to notify them or they were going to start charging me $2,000 a year."

She got in touch with local land surveyor Michael Pallamary, who had been working on similar cases in the San Diego area.

Pallamary learned quickly that the problem had been affecting people all across the country.

"The maps are all in error," he told Fox News. "And because of the erroneous maps, they're requiring these homeowners to purchase very, very expensive flood insurance and this is absolutely absurd. These are not flood-prone properties. They're high and dry and safe and secure."

Pallamary said some of the new high-risk flood zones include homes perched high above the water that are now drawn into the ocean, while other maps show homes at risk from rivers and creeks that have been dried up for years.

FEMA has admitted that some maps contain topographical errors and said it is working to correct them. However, to avoid the extra insurance premium, homeowners cannot wait for a FEMA fix. Instead, they need to prove it themselves by submitting for a FEMA "letter of map amendment" -- to get a revision.

"That letter map amendment is a process that a homeowner can use to demonstrate their property is on a local area of high ground and obtain a letter from FEMA that recognizes that," FEMA spokesman Ed Curtis said. "It removes them essentially from the map as far as being in the high-risk zone."

This means, though, that a resident whose home was drawn incorrectly on the map needs to hire a surveyor like Pallamary, which can be pricey. Pallamary said this can create a headache for homeowners.

"People have had a lot of challenges with this economy over the last few years," Pallamary said. "Can you imagine getting a demand bill that you have to pay $3,000 or more in flood insurance when you're sitting on top of a hill?"

Clemons was eventually able to get her situation resolved, but problems still exist for many other homeowners, including nearly a dozen of her neighbors.

FEMA said it will continue to work with local officials in areas where problems are reported, and the primary focus is to make sure people's homes are protected against the next big storm.