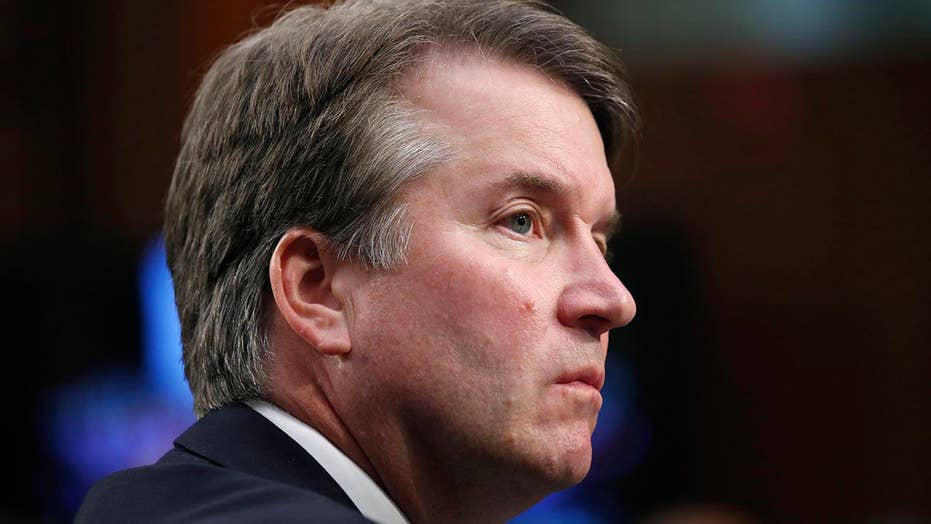 Previewing the road ahead for Brett Kavanaugh

After a week of confirmation hearings, it's up to the Senate Judiciary Committee to vote on Supreme Court nominee Brett Kavanuagh and prospectively send his nomination to the floor so the full Senate can provide advice and consent.

Hillary Clinton on Wednesday repeated a Democratic talking point about Judge Brett Kavanaugh’s use of the phrase “abortion-inducing drugs” -- a claim that has been repeatedly debunked by fact-checkers.

“I want to be sure we're all clear about something that Brett Kavanaugh said in his confirmation hearings last week,” she tweeted. “He referred to birth-control pills as "abortion-inducing drugs." That set off a lot of alarm bells for me, and it should for you, too.”

Kavanaugh, at his Supreme Court confirmation hearing on Thursday was asked about a case he ruled on involving Priests for Life, a pro-life group that was challenging ObamaCare’s contraceptive mandate that the group said violated its religious beliefs.

"That was a group that was being forced to provide certain kind of health coverage over their religious objection to their employees. And under the Religious Freedom Restoration Act, the question was first, was this a substantial burden on the religious exercise? And it seemed to me quite clearly it was," Kavanaugh told lawmakers on the Senate Judiciary Committee.

"It was a technical matter of filling out a form in that case," he said. "In that case, they said filling out the form would make them complicit in the provision of the abortion-inducing drugs that were, as a religious matter, objected to."

Democrats and pro-choice groups seized on the reference to “abortion-inducing drugs,” which Sen. Kamala Harris, D-Calif., described as a “dog whistle for going after birth control.” A video she tweeted out cut out the preface that showed Kavanaugh was making it clear he was summarizing the arguments of Priests for Life.

After a wave of criticism, particularly from the White House and Republicans, Harris tweeted out a fuller version of the video, but stood by her claim that it was a “dog whistle terms used by extreme anti-choice groups to describe birth control.”

But the claim drew criticism not just from Republicans, but also from fact-checkers -- which were scathing in their analysis of the Democratic talking point.

“In Harris’ tweet, Kavanaugh appears to define contraception as abortion-inducing. But the video failed to include a crucial qualifier: ‘They said.’ In fact, he was citing the definition of the religious group Priests for Life. He has not expressed his personal view,” Politifact’s check said.

The Washington Post’s Glenn Kessler said that “it’s pretty clear from the context that he was quoting the views of the plaintiffs rather than offering a personal view.” He said that original tweet by Harris “was slightly mitigated” by the tweet offering fuller context, but still gave the claim “Four Pinnochios.”

“She earns Four Pinocchios -- and her fellow Democrats should drop this talking point,” the factcheck read.

But Clinton did not heed that advice, and in a lengthy Twitterstorm on Wednesday, accused Kavanaugh of using “a dog whistle to the extreme right.”

“When Kavanaugh called birth control "abortion-inducing drugs," he made it clear that safe and legal abortion isn't the only fundamental reproductive right at grave risk if he is confirmed,” she tweeted. “Access to birth control is, too.”

The Clinton tweet drew a swift backlash from commentators, journalists and Republicans.

“Nothing is more characteristically Hillary Clinton that going in on a particular partisan talking point only *after* it has been extensively litigated, fact-checked as false, etc,” said New York Times columnist Ross Douthat.

“I want to be sure we’re all clear: this didn’t happen,” his office tweeted. “Numerous fact-checks have ruled this false and the Washington Post gave it 4 Pinocchios.”

Then, in a snarkier flourish, his office made reference to Clinton’s failing in the 2016 campaign to visit some key midwest states.

Maybe the fact checks she missed were in Wisconsin,” it tweeted.