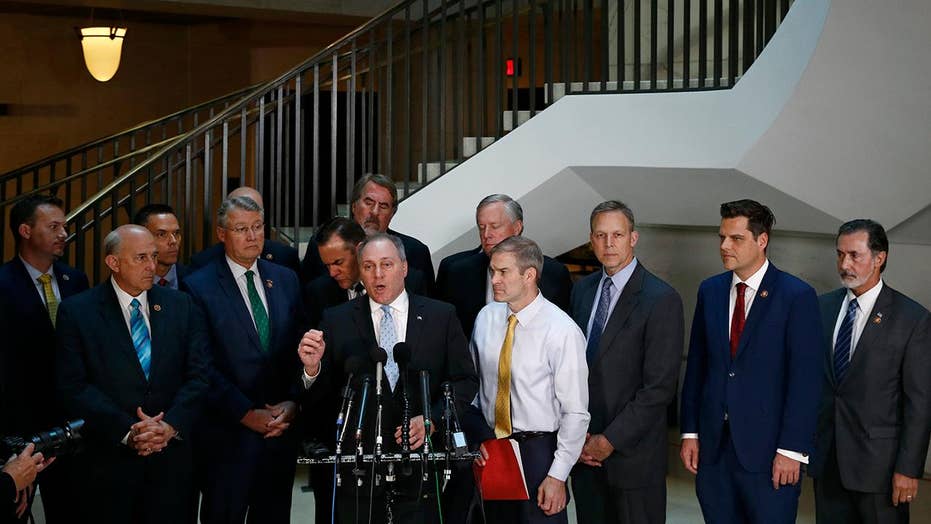 Perhaps it is only appropriate to pen this missive just a few days before All Hallows Eve. One cannot imagine a more horrifying, frightening turn of events that have the potential to spook the country in the coming weeks. So, pour a cup of hot cocoa. Snuggle up near the crackling fire. Dim the lights. Turn on “Danse Macabre” by Saint-Saens. This is a Halloween story, Washington style. And it’s as scary as it gets.

Being scared is all about uncertainty.

So, perhaps the “uncertainty principle” propounded by German theoretical physicist Werner Heisenberg can shed light on the calamity which awaits Congress and the Trump Administration this fall as House Democrats sink deeper into their impeachment probe.

The Heisenberg Principle asserts that it's impossible to know the "position" of something while simultaneously studying its movement. Just the mere engagement of evaluating how fast something moves impacts where it is. Heisenberg argued one couldn’t study one phenomenon without affecting the other.

The same applies to understand where the House stands with impeachment this autumn – at the same time it tries to fund the government to avoid a shutdown on November 21 – just as it wrestles with the USMCA, the new trade pact between the U.S., Mexico and Canada.

Nothing exists in a vacuum in Washington. It’s a powerful weave, fused together. And like Heisenberg, we can’t solitarily understand the nature of impeachment, government funding and the USMCA without considering the triumvirate of variables together.

November and December could well be a train wreck in Washington. A cataclysm of intergalactic proportions if the government shuts down amid impeachment. Late November is when House Democrats could move to the "open" phase of their impeachment inquiry. Transcripts of closed-door depositions may start popping up as the House Judiciary Committee - charged with crafting articles of impeachment - summon witnesses for the blockbuster, public hearings. Meantime, trade talks continue as lawmakers and administration officials try to strike the final language on the USMCA.

“We hit a couple of bumps,” said House Ways and Means Committee Chairman Richard Neal (D-MA) early last week about the USMCA. But Neal noted, “we worked them out.”

But, the USMCA language isn’t frozen in form yet. Does the volatile Mr. Trump torpedo a potential agreement because of impeachment? Democrats would portray this as a big win. Does he sign off on one approach with the USMCA one day – then backpedal a few days later, raging at House Intelligence Committee Chairman Adam Schiff (D-CA) and House Speaker Nancy Pelosi (D-CA)? The President’s certainly reversed himself a number of times, on a host of issues, ranging from Syria, to imposing tariffs on Mexico or even ordering airstrikes abroad.

The possibility of a government shutdown in this scenario hyper-complicates things.

There could be efforts soon to approve an overall, stopgap spending patch to run the government through late winter or spring if Congress is mired in impeachment. Such a battle plan could fund Washington through a possible vote to impeach the President and a lengthy trial on the Senate floor. But remember one thing: President Trump would have to sign an interim spending bill into law. Otherwise, the government shuts down. There are whispers on Capitol Hill that Mr. Trump could try to hold government funding hostage unless Democrats drop their impeachment inquest. And don’t forget what sparked the big shutdown late last year and early this year: a dispute over the border wall. Congress and the White House haven’t resolved that issue. Fox is told it’s possible President Trump would balk at a “clean” funding extension. It would have to include robust funding for a wall. The old flashpoint is the new flashpoint.

It’s possible that President Trump could attempt to use government funding as leverage against impeachment. So far, the administration has not demonstrated it has a strong hand to play against impeachment, repeatedly attacking the Democrats on “process” grounds.

The government’s lacked funding on three occasions during President Trump’s watch. The first was a miniature shutdown in early 2018. Mr. Trump believed he prevailed in that one, not agreeing to Democratic demands to protect DACA recipients.

Government funding lapsed for just a few hours weeks later after Sen. Rand Paul (R-KY) balked at another spending accord. The House and Senate resolved that dispute by dawn. Then, there was the monster, 35-day shutdown which started before Christmas and bled into late January. Democrats feel they won that imbroglio, rejecting the President’s push for a border wall.

If Mr. Trump feels his back is against the wall with impeachment, sources in Congress tell Fox they fear he may go for broke. Prompting a government shutdown to try derail the impeachment inquiry is the equivalent of deploying a political nuclear weapon. No one knows the toll. But the carnage will be high.

If the government does shutter, an epistemological question will begin to swirl on Capitol Hill: is the impeachment inquiry “essential?” A great debate always descends on the Capitol as to what workers, aides and staff qualify as “essential” during a government shutdown. Congress and each office make the decision as to who and what is essential. But would the Republican-controlled Senate take a dim view of the Democratic House’s impeachment inquiry? Could the Senate demand the House stop impeachment in exchange for forging an agreement on government funding? Is a Senate impeachment trial “essential” during a shutdown?

One wonders what arguments the administration may make about “Legislative Branch Appropriations.” Funding for Congress is one of the 12 annual bills which run the government. Would the administration try to harness funding for the House by clamping down on impeachment? Would the Republican Senate do the same?

In other words, this is about as messy as one can imagine. Let your mind run wild. Imagine the devious scenarios which could await this fall. None are pleasant.

So that’s the Halloween story. Think you can sleep easy after that one? No bad dreams? No monsters lurking under your bed? You won’t think it’s something going bump in the night when the furnace kicks on? And just what was that creaking floorboard at 3:58 am?

Ghost stories work because they prey on the imagination. Letting your mind run wild. Envisioning possibilities.

There are lots of possibilities on Capitol Hill this fall. There’s a lot of uncertainty. And that’s why these scenarios are so scary.