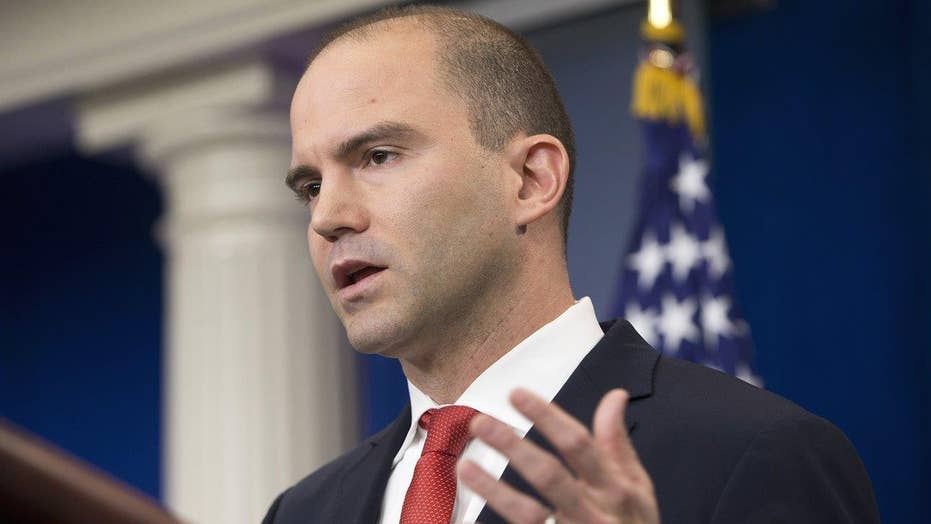 A group the White House recently identified as a key surrogate in selling the Iran nuclear deal gave National Public Radio $100,000 last year to help it report on the pact and related issues, according to the group's annual report. It also funded reporters and partnerships with other news outlets.

The Ploughshares Fund's mission is to "build a safe, secure world by developing and investing in initiatives to reduce and ultimately eliminate the world's nuclear stockpiles," one that dovetails with President Barack Obama's arms control efforts. But its behind-the-scenes role advocating for the Iran agreement got more attention this month after a candid profile of Ben Rhodes, one of the president's top foreign policy aides.

In The New York Times Magazine article, Rhodes explained how the administration worked with nongovernmental organizations, proliferation experts and even friendly reporters to build support for the seven-nation accord that curtailed Iran's nuclear activity and softened international financial penalties on Tehran.

"We created an echo chamber," said Rhodes, a deputy national security adviser, adding that "outside groups like Ploughshares" helped carry out the administration's message effectively.

The magazine piece revived Republican criticism of the Iran agreement as they suggested it was evidence of a White House spin machine misleading the American people. The administration accused opponents of trying to re-litigate the deal after failing to defeat it in congressional votes last year.

Outside groups of all stripes are increasingly giving money to news organizations for special projects or general news coverage. Most news organizations, including The Associated Press, have strict rules governing whom they can accept money from and how to protect journalistic independence.

Ploughshares' backing is more unusual, given its prominent role in the rancorous, partisan debate over the Iran deal.

"It is common practice for foundations to fund media coverage of underreported stories," Ploughshares spokeswoman Jennifer Abrahamson said. Funding "does not influence the editorial content of their coverage in any way, nor would we want it to."

Ploughshares has funded NPR's coverage of national security since 2005, the radio network said. Ploughshares reports show at least $700,000 in funding over that time. All grant descriptions since 2010 specifically mention Iran.

"It's a valued partnership, without any conditions from Ploughshares on our specific reporting, beyond the broad issues of national and nuclear security, nuclear policy, and nonproliferation," NPR said in an emailed statement. "As with all support received, we have a rigorous editorial firewall process in place to ensure our coverage is independent and is not influenced by funders or special interests."

Republican lawmakers will have concerns nonetheless, especially as Congress supplies NPR with a small portion of its funding. Just this week, the GOP-controlled House Oversight Committee tried to summon Rhodes to a hearing entitled "White House Narratives on the Iran Nuclear Deal," but he refused.

Pompeo told the AP he repeatedly asked NPR to be interviewed last year as a counterweight to a Democratic supporter of the agreement, Rep. Adam Schiff of California, who he said regularly appeared on the network.

But NPR refused to put Pompeo on the air, he said. The network said it had no record of Pompeo's requests, and listed several prominent Republicans who were featured speaking about the deal or economic sanctions on Iran.

Another who appeared on NPR is Joseph Cirincione, Ploughshares' president. He spoke about the negotiations on air at least twice last year. NPR identified Ploughshares as an NPR funder one of those times; the other time, it didn't.

Ploughshares boasts of helping to secure the deal. While success was "driven by the fearless leadership of the Obama administration and supporters in Congress," board chairwoman Mary Lloyd Estrin wrote in the annual report, "less known is the absolutely critical role that civil society played in tipping the scales towards this extraordinary policy victory."

The 33-page document lists the groups that Ploughshares funded last year to advance its nonproliferation agenda.

The Arms Control Association got $282,500; the Brookings Institution, $225,000; and the Atlantic Council, $182,500. They received money for Iran-related analysis, briefings and media outreach, and non-Iran nuclear work.

J-Street, the liberal Jewish political action group, received $576,500 to advocate for the deal. More than $281,000 went to the National Iranian American Council.

Princeton University got $70,000 to support former Iranian ambassador and nuclear spokesman Seyed Hossein Mousavian's "analysis, publications and policymaker engagement on the range of elements involved with the negotiated settlement of Iran's nuclear program."

Ploughshares has set its sights on other media organizations, too.

In a "Cultural Strategy Report" on its website, the group outlined a broader objective of "ensuring regular and accurate coverage of nuclear issues in reputable and strategic media outlets" such as The Guardian, Salon, the Huffington Post or Pro Publica.

Previous efforts failed to generate enough coverage, it noted. These included "funding of reporters at The Nation and Mother Jones and a partnership with The Center for Public Integrity to create a national security desk." It suggested using "web videos, podcasts, photo-based stories" and other "attention-grabbing formats" for "creatively reframing the issue."

"None of the funding received by Ploughshares was for coverage of the Iran deal," said Bale, whose company received $70,000. "In general, we avoided that subject because the topic did not lend itself to the type of investigative reporting the Center does."

Caitlin Graf, a spokeswoman at The Nation, said her outlet had no partnership with Ploughshares. She referred queries to The Nation Institute, a nonprofit associated with the magazine that seeks to strengthen the independent press and advance social justice. Taya Kitman, the institute's director, said Ploughshares' one-year grant supported reporting on U.S.-Iran policy, but strict editorial control was maintained.

The AP has taken grants from nonpolitical groups and journalism foundations such as the Knight Foundation. As with all grants, "AP retains complete editorial control of the final news product, which must fully meet AP standards for independence and integrity," Standards Editor Thomas Kent said.