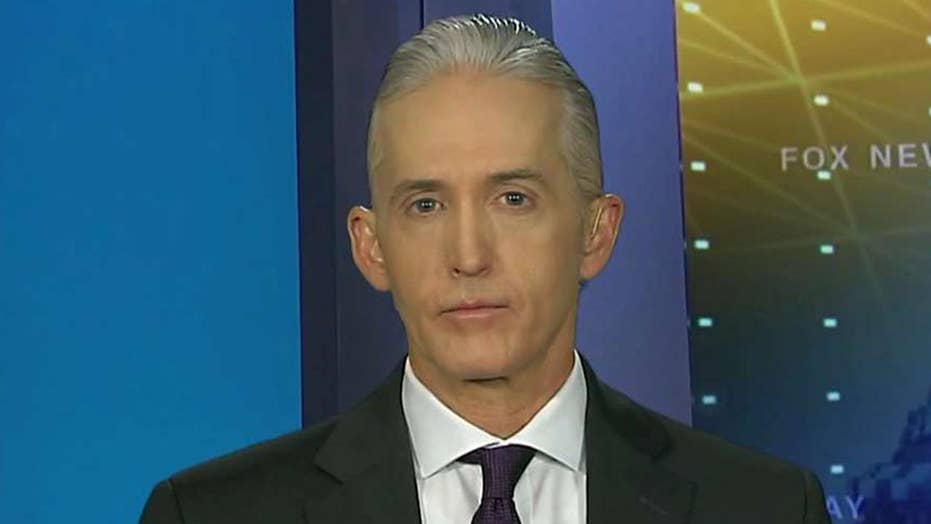 Rep. Gowdy on Russian dossier and accusations of collusion

Republican Rep. Trey Gowdy, the leader of the House’s top investigative committee, slammed special counsel Robert Mueller on Sunday for allowing the news media to learn that he and his legal team now have charges in their Russia investigation.

“In the only conversation I’ve had with Robert Mueller, I stressed to him the importance of cutting out the leaks,” Gowdy, chairman of the House Committee on Oversight and Government Reform, told “Fox News Sunday.” “It’s kind of ironic that the people charged with investigating the law and the violations of the law would violate the law.”

Mueller and his team have for roughly the past five months been leading a Justice Department investigation into whether anybody associated with the President Trump’s 2016 White House campaign colluded with Russia to influence the election outcome. On Friday night, CNN reported that Mueller’s team has filed the first charges in the case with a federal grand jury.

“Make no mistake, disclosing grand jury material is a violation of the law. Somebody violated their oath of secrecy,” Gowdy, a South Carolina lawmaker and former federal prosecutor, also told Fox News on Sunday.

The Wall Street Journal reported Saturday that anyone charged will be taken into custody Monday. However, the charges have been sealed by a federal judge. So whoever is charged and whether the charges are criminal remains unclear.

The possible charges come as Mueller's tactics have been called into question.

During a raid by the FBI in July of former Trump campaign chairman Paul Manafort's Virginia home,  a source close to the investigation told Fox News at the time the scope of the search was "heavy-handed, designed to intimidate."

Andrew Weissmann, the prosecutor tapped by Mueller to help lead the investigation, has also received criticism. Sidney Powell, a former federal prosecutor recently wrote about Weissman in a piece titled, “Judging by Mueller's staffing choices, he may not be very interested in justice.”

Powell accused Weissmann, once the director of the Enron Task Force, of “prosecutorial overreach” in past cases and said it could signal what’s to come for President Trump and his associates in the Russia probe.

“What was supposed to have been a search for Russia’s cyberspace intrusions into our electoral politics has morphed into a malevolent mission targeting friends, family and colleagues of the president,” Powell wrote in The Hill. “The Mueller investigation has become an all-out assault to find crimes to pin on them — and it won’t matter if there are no crimes to be found. This team can make some.”

During a Saturday appearance on Fox News, former Department of Justice official Robert Driscoll told anchor Leland Vittert it’s possible the indictment might not even be directly tied to Russian collusion.

“Think back to the Clinton years,” Driscoll said. “The Whitewater investigation was about an Arkansas land deal. And it ended up being about something else completely.”

Driscoll added, “Robert Mueller is free to look at taxes, is free to look at lobbying filings, foreign agent filings. Things like that could all be involved that wouldn’t necessarily touch on the issue of Russia collusion that everyone seems focused on politically.”

Manafort has been the subject of a longstanding investigation into his dealings in the Ukraine several years ago -- for which he did not file as a foreign agent until June 2017.

Federal agents, reportedly in search of evidence related to the Russia investigation, this summer raided his northern Virginia home. He also was reportedly wiretapped by investigators before and after the 2016 presidential election.

Flynn, a retired Army lieutenant general, was a Trump surrogate during the campaign and briefly served as national security adviser before being fired for failing to fully disclose his conversations with Sergey Kislyak, then-Russian ambassador to the United States.

The FBI also secured approval from a federal court to monitor the communications of Trump campaign adviser Carter Page.

On Saturday, Page released a statement to Fox News in response to questions about whether he or his lawyers have been notified about any charges.

Page said in the statement that he has worked with the executive branch and Congress since being contacted in March. But he also suggested that revelations about the Democratic Party having helped finance a dossier to smear Trump has tainted any Russia probe.

“In terms of ‘charges', I can’t even imagine what might even be considered now that the false evidence from the politically-motivated, big-money-financed Dodgy Dossier that started this extrajudicial disaster has instead been so thoroughly exposed as a complete sham,” Carter wrote in the statement.

Richard Hibey, an attorney for Manafort, told Fox News on Friday that neither he nor any of his colleagues representing Manafort had been informed of any indictment of their client.

Manafort has been the subject of a longstanding investigation into his dealings in the Ukraine several years ago – for which he did not file as a foreign agent until June 2017. In addition to his home being raided, Manafort was reportedly wiretapped by investigators before and after the 2016 presidential election.

Flynn served as a Trump surrogate during the campaign and briefly served as national security adviser before being fired over his conversations with Sergey Kislyak, who was Russia's ambassador to the United States.

Mueller has reportedly probed whether Flynn was involved in a private effort to get former Democratic nominee Hillary Clinton's emails from Russian hackers.

The Justice Department’s special counsel’s office declined to comment on the reports of filed charges.

Trump has denied allegations that his campaign colluded with Russians and condemned investigations into the matter as “a witch hunt”.