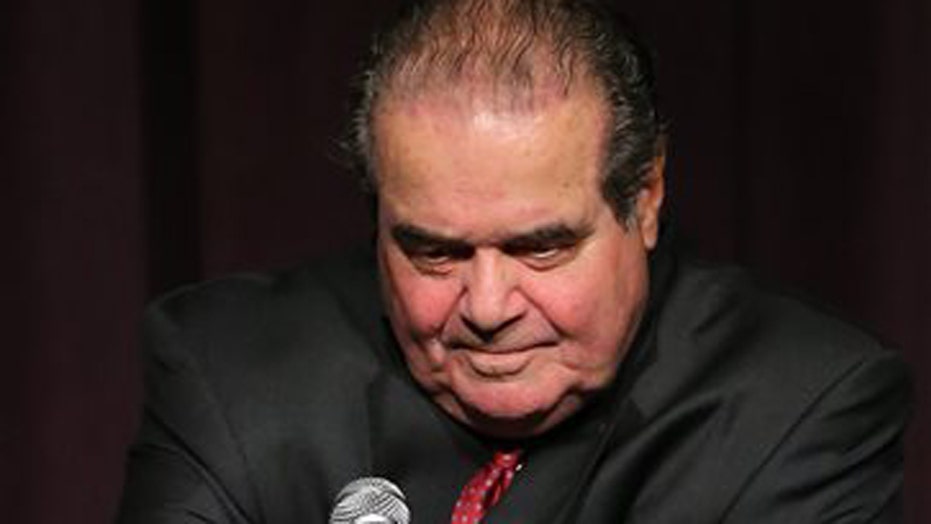 The late Supreme Court Justice Antonin Scalia was known for his quick wit as much as his sharp legal mind.

The following are selected quotes from his opinions and speeches:

"I don't assess the nation's mood, I assess my own, and I'm feeling good."

"Being on the Supreme Court is rather like taking the veil; you just sit there and try to get the right answer as other people argue in front of you. It's not nearly as exhilarating as the Executive Branch."

On judicial activism: "The Court must be living in another world. Day by day, case by case, it is busy designing a Constitution for a country I do not recognize."

On the war on terror: "War is war, and it has never been the case that when you capture a combatant, you have to give him a jury trial in your civil courts. It's a crazy idea to me. … If he was captured by my army on the battlefield that is where he belongs. I had a son on that battlefield and they were shooting at my son. And I am not about to give this man -- captured in war -- a full jury trial, that is just crazy."

"The Court today continues its quixotic quest to right all wrongs and repair all imperfections through the Constitution. Alas, the quest cannot succeed."

Scalia has said this was the best opening line to one of his opinions:  "This case, involving legal requirements for the content and labeling of meat products such as frankfurters, affords a rare opportunity to explore simultaneously both parts of Bismarck's aphorism that 'No man should see how laws or sausages are made.'"

On which case most people ask him about: "I guess the one that created the most waves of disagreement was Bush v. Gore, OK? That comes up all the time. And my usual response is: Get over it."

On why he became a lawyer: "I had an Uncle Vince -- most Italians have an Uncle Vince -- who was a lawyer. And he seemed to have a good life so I thought I'd give it a shot. And it turns out it was what I loved. Don't do it if you don't love it, it's not the most exciting profession unless you love the process, you love words."

"A journalistic purpose could be someone with a Xerox machine in a basement."

"As long as judges tinker with the Constitution to 'do what the people want,' instead of what the document actually commands, politicians who pick and confirm new federal judges will naturally want only those who agree with them politically."

On whether the Constitution has "economic" content: "A law can be both economic folly and constitutional."

On his belief in "originalism": "Our manner of interpreting the Constitution is to begin with the text, and to give that text the meaning that it bore when it was adopted by the people ... This is such a minority position in modern academia and in modern legal circles that on occasion I'm asked when I've given a talk like this a question from the back of the room -- 'Justice Scalia, when did you first become an originalist?' -- as though it is some kind of weird affliction that seizes some people -- 'When did you first start eating human flesh?'"

On whether unelected judges should be deciding issues such as abortion and the death penalty: "If you think aficionados of a 'living' Constitution want to bring you flexibility, think again. You think the death penalty is a good idea? Persuade your fellow citizens to adopt it. You want a right to abortion? Persuade your fellow citizens and enact it. That's flexibility. Why in the world would you have it interpreted by nine lawyers."

"What is a 'moderate' interpretation of the text? Halfway between what it really means and what you'd like it to mean?"

"Every time the Supreme Court defines another right in the Constitution, it reduces the scope of democratic debate."

On "decency" laws: "Perhaps the dissenters believe that 'offense to others' ought to be the only reason for restricting nudity in public places generally ... The purpose of Indiana's nudity law would be violated, I think, if 60,000 fully consenting adults crowded into the Hoosierdome to display their genitals to one another, even if there were not an offended innocent in the crowd."

"'The operation was a success, but the patient died.' What such a procedure is to medicine, the Court's opinion in this case is to law."

--Concurrence in National Endowment for the Arts v. Finley (1998)

On commuting to high school, where he was a member of the Rifle Team: "I used to travel on the subway from Queens to Manhattan with a rifle. Can you imagine doing that now in New York? I mean, 'There's a man with a gun!'"

On life tenure for federal judges:  "So long as you stay awake on the bench and don't drool, there's nothing they can do about it."

On religious displays on government property: "I find it a sufficient embarrassment that our Establishment Clause jurisprudence regarding holiday displays has come to 'requir[e] scrutiny more commonly associated with interior decorators than with the judiciary.' But interior decorating is a rock hard science compared to psychology practiced by amateurs."

"Since Walton [v. Arizona, a 1990 death penalty case], I have acquired new wisdom ... or, to put it more critically, have discarded old ignorance."

"What secret knowledge, one must wonder, is breathed into lawyers when they become Justices of this Court, that enables them to discern that a practice which the text of the Constitution does not clearly proscribe, and which our people have regarded as constitutional for 200 years, is in fact unconstitutional?"

Letter to the editor of the Boston Herald: "It has come to my attention that your newspaper published a story on Monday stating that I made an obscene gesture -- inside Holy Cross Cathedral [Boston], no less. The story is false, and I ask that you publish this letter in full to set the record straight. Your reporter, an up-and-coming 'gotcha' star named Laurel J. Sweet, asked me (o-so-sweetly) what I said to those people who objected to my taking part in such public religious ceremonies as the Red Mass I had just attended. I responded, jocularly, with a gesture that consisted of fanning the fingers of my right hand under my chin. Seeing that she did not understand, I said 'That's Sicilian,' and explained its meaning-- which was that I could not care less... How could your reporter leap to the conclusion (contrary to my explanation) that the gesture was obscene? Alas, the explanation is evident in the following line from her article: "'That's Sicilian,' the Italian jurist said, interpreting for the 'Sopranos' challenged." From watching too many episodes of the 'Sopranos,' your staff seems to have acquired the belief that any Sicilian gesture is obscene-- especially when made by an 'Italian jurist.' (I am, by the way, an American jurist.)   Sincerely, Antonin Scalia."

"I don't worry about my legacy. Just do your job right, and who cares?"

"I respectfully, and indeed diffidently, dissent."