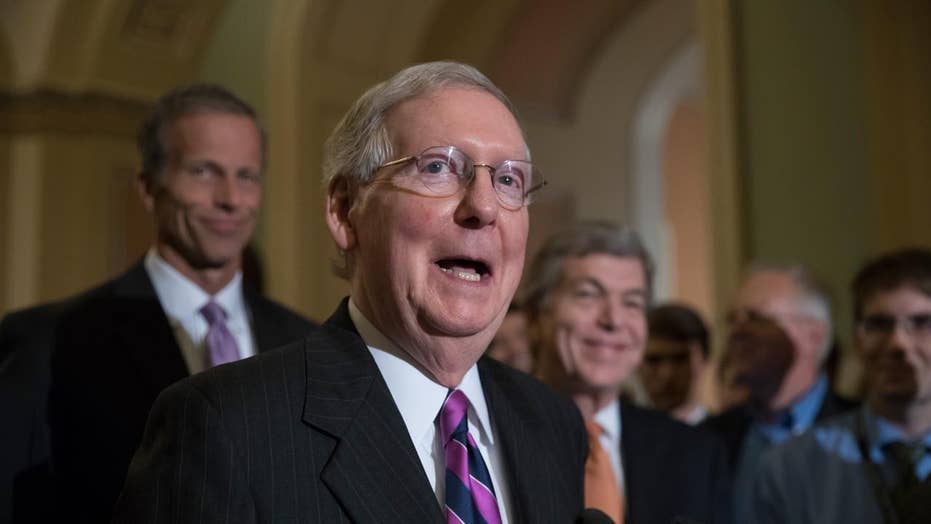 President Trump's Twitter assault on Senate Majority Leader Mitch McConnell continued Thursday, as the frustrated commander-in-chief resumed his criticism of the Republican leadership for not advancing the GOP agenda.

Trump's Day II morning tweet criticized McConnell, R-Ky., for failing to pass a plan to repeal and replace ObamaCare, and came hours after a tense 10-minute phone call between the two.

Later in the day, Trump tweeted: "Mitch, get back to work and put Repeal & Replace, Tax Reform & Cuts and a great Infrastructure Bill on my desk for signing. You can do it!"

The day before, while much of the media focused on the threat North Korea poses to the United States, Trump lashed out at McConnell on Twitter.

“Senator Mitch McConnell said I had ‘excessive expectations,’ but I don’t think so. After 7 years of hearing Repeal & Replace, why not done?” Trump tweeted Wednesday afternoon.

The president’s tweet was seemingly in response to comments McConnell made in a Rotary Club meeting in his home district earlier this week.

McConnell explained to constituents the “complexity of legislating” in response to questions regarding the lack of a “repeal and replace” of ObamaCare.

“A Congress goes on for two years. Part of the reason I think that the storyline is that we haven’t done much is because, in part, the president and others have set these early timelines about things [that] need to be done by a certain point,” McConnell said Monday.  “Our new president, of course, has not been in this line of work before, and I think had excessive expectations about how quickly things happen in the democratic process.”

The president has repeatedly expressed his discontent with Republicans in both the House and the Senate for their failure to pass a plan to repeal ObamaCare and replace it with a new health care plan. The administration was left without a major legislative win before the August recess, with lawmakers, seemingly, willing to shift their focus from health care to tax reform when they return to Capitol Hill.

And after fighting Republicans tooth-and-nail for years on their repeal and replace message, Democrats have started touting a slew of proposals aimed to improve the ailing health care system.

DEMS SUDDENLY SCRAMBLING TO COME UP WITH OBAMACARE FIX

Some Senate Republicans have welcomed Democrats to the process. Sen. Jeff Flake, R-Ariz., said they needed to “stick with” health care and bring it to a resolution.

“The end is going to be sitting down with our colleagues from the other side of the aisle and getting something passed,” Flake said on Fox News’ “America’s Newsroom.”

Senate hearings to discuss health care, in a bipartisan fashion, are set to begin September 4.