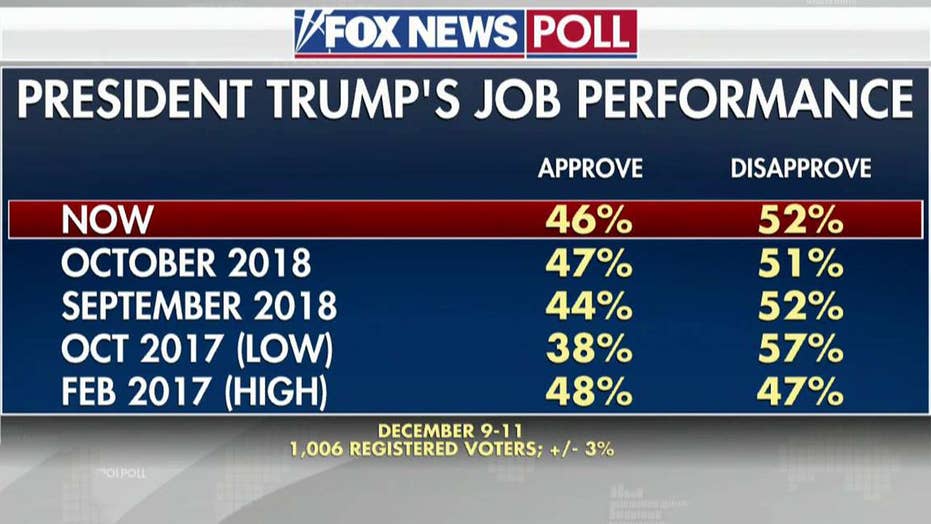 Donald Trump continues to suffer from upside-down job ratings as his second year as president winds down.  In addition, views of the economy remain divided, voters feel the administration’s economic policies have not helped them -- and fewer are optimistic about future economic conditions than two years ago, according to the latest Fox News poll.

Forty-five percent of voters think the economy will be in better shape a year from now, down from 56 percent who felt that way in December 2016.  Although the question has been asked at irregular intervals on the Fox News poll over the past 20 years, this is the most pessimistic outlook since February 2001.

Currently, 47 percent say the economy is in excellent or good shape, while 51 percent call conditions only fair or poor.  That is mostly unchanged since January (49-49 percent).  However, it is a significant improvement from when President Trump was first elected and two-thirds rated the economy negatively.

About one in five voters, 22 percent, say they have personally been helped by the administration’s economic policies.  An almost identical 21 percent say they’ve been hurt, while just over half, 51 percent, say Trump’s policies have not made a difference either way for them.

Again this month Trump gets his best marks on handling the economy:  50 percent of voters approve, while 43 percent disapprove.  On border security, it’s 46-49 percent, and on immigration, it’s 43-53 percent.  On voters’ top concern, health care, the president is underwater by 23 points: 33-56 percent.

Overall, 46 percent of voters approve of the job Trump is doing and 52 percent disapprove.  In January, it was 45-53 percent.  Moreover, approval has barely budged all year, staying within the narrow range of 43 to 47 percent.

Special Counsel Robert Mueller does better.  By a 19-point margin, 56-37 percent, voters approve of his investigation of the Trump campaign’s ties with Russia, and more voters think the investigation will ultimately strengthen the country (42 percent) than weaken it (34 percent).

A record 48 percent think the Trump campaign coordinated with the Russians in 2016.  Thirty-seven percent believe there was no coordination, down 15 points from a high of 52 percent in June 2017.

Of those pleading guilty in the Mueller investigation so far, 44 percent of voters say they committed serious crimes, compared to 21 percent saying minor crimes and 11 percent saying no crimes at all.

“The relative stability of President Trump’s 2018 job approval will be severely challenged next year,” says Democratic pollster Chris Anderson, who conducts the Fox News poll with Republican Daron Shaw.  “Mueller’s investigation is more popular than the president, while the circle of voters believing Trump’s campaign didn’t coordinate with Russia is shrinking. Then there is the increasing economic uncertainty and Democrats assuming control of the House.  Saying 2019 will be a test for Donald Trump would be an understatement.”

-- Views divide, 40-47 percent, over whether the president has revised foreign trade deals to be more favorable to the U.S.  That falls short of expectations.  Two years ago, 62 percent of voters overall and 94 percent of Republicans believed Trump would improve the deals (Dec. 2016).  Now, 76 percent of Republicans think he has done so.  Among Democrats, 34 percent thought he would, and 13 percent say he has.

-- 41 percent view NAFTA positively, including 46 percent of Democrats, 38 percent of Republicans and 37 percent of independents.  One in four voters is unable to rate the trade deal.

-- The survey asks voters how often the president puts his business interests ahead of the interests of the American people.  Over half think he usually does (always or often).  Thirty-five percent say Trump always puts his personal business first -- more than twice the number saying he never does (14 percent).  Some 17 percent say often, 15 percent say sometimes, and 14 percent say rarely.

-- The biggest shift since January is a 7-point increase in concern over climate change, mostly driven by a 13-point jump among Republicans:  41 percent are concerned now, up from 28 percent at the beginning of the year.

The Fox News poll is based on landline and cellphone interviews with 1,006 randomly chosen registered voters nationwide and was conducted under the joint direction of Anderson Robbins Research (D) and Shaw & Company Research (R) from December 9-11, 2018.  The poll has a margin of sampling error of plus or minus three percentage points for all registered voters.