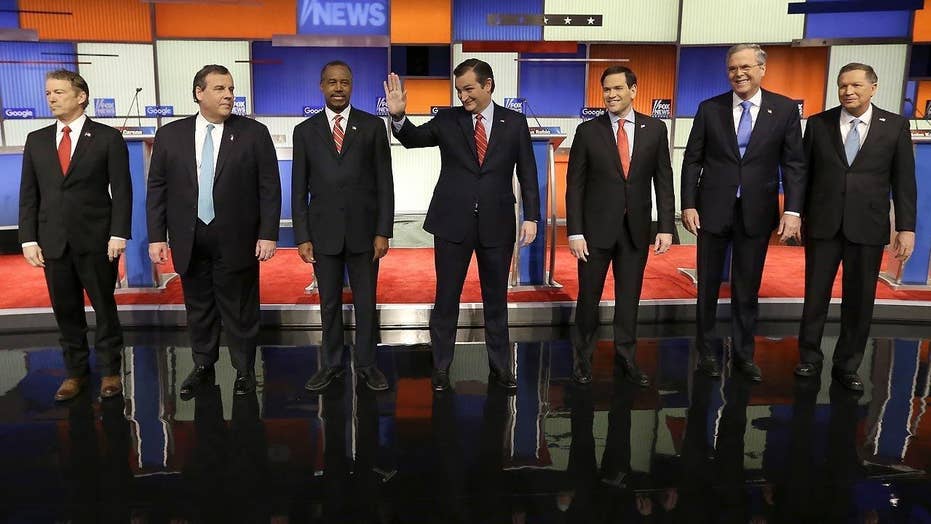 Candidates clash over divisions within the Republican Party, strategy to fight terror at the 7th GOP debate in Des Moines, Iowa #GOPDebate

The 7th GOP debate is underway in Des Moines, Iowa, the state that will hold the first presidential contest on Monday. Here are snapshots of quotes and special moments coming from the debate.

There they go again

Have you noticed certain phrases, anecdotes and people are uttered in nearly every debate?

Sen. Marco Rubio likes to say "When I'm president of the United States..."

New Jersey Gov. Christie almost unfailingly sighs after an exchange between senators -- tonight it was between Sen. Ted Cruz and Rubio -- and says non-Beltway people need a dictionary to understand the jargon.

Cruz relishes stepping back and assessing what he casts as the disappointment of debates, which he says he feels should be less about personalities and more about policy.

Many candidates reach for the disclaimer that begins "I like (name of the person you don't really like goes here)..." before launching into a tirade about how duplicitous and inept that person is.

That caused many in the Twitterverse to wince.

Cruz said Rubio is charming and smooth but (imagine the soundtrack from "Jaws" at this point) that when both men ran for the U.S. Senate, they each promised to fight amnesty. Cruz said only he was true to his word.

Donald Trump likes to emphasize points with his right hand, and make faces -- that famous scowl, you've seen it -- when he shows up, that is.

Carson throws a zinger, with a smile, of course

In an answer to a question about how he could be president if he's never held political office, Ben Carson concedes he's not a politician, and says he actually tells "the truth"

He speaks softly, but carries a sharp scalpel.

Later, in the debate, Carson seems startled when he is called to respond to a video question by YouTube sensation Dulce Candy, a Mexican-American woman who provides make-up advice on her videos. Candy expresses concern about would-be entrepreneurs from around the world seeing the United States as an unwelcoming place.

The retired neurosurgeon first says "We are a land of immigrants," but then speaks about all the people who want to come to the United States to destroy it.

He says he realizes "that the vast majority of people coming here are not those kinds of people, but that's good enough."

The former Florida governor, who is pushing for immigration reform to favor skilled people for admission to the United States, and rely less on family-based migration, said "We should be a welcoming nation."

Rubio says the United States is already the most generous nation on earth on immigration, "but are we not a soverign country, are we not allowed to choose who comes in?"

Cruz picks up Trump's war on the moderators

Ted Cruz, growing visibly angry at moderator Chris Wallace, says that the moderators all seem to be encouraging his rivals to go after him.

"Gosh, if you guys ask one more mean question, I may have to leave the stage," Cruz said.

Rubio jumped in: "Don't worry. I'm not leaving the stage, no matter what you ask me."

Did some get the red memo, and others the blue?

If you think you're seeing red, it's because you are.

Donald Trump was absent, but his name was very much there

"I'm a maniac, and everyone on this stage is stupid fat and ugly," said Cruz, the Texas firebrand who wasted no time in attacking the no-show Trump, who was once his buddy of sorts, then a frenemy and now a full-blown enemy.

Cruz said he was trying to "get the Donald Trump portion of the debate out of the way."

Trump had referred to Cruz acting like a maniac in the Senate.

"I kind of miss Donald Trump he was a teddy bear to me," said Jeb Bush, to some laughter.

But let's go back to Hillary and Obama

Rubio takes the debate focus to Hillary Clinton's failings, as he sees it, as well as those of President Barack Obama.