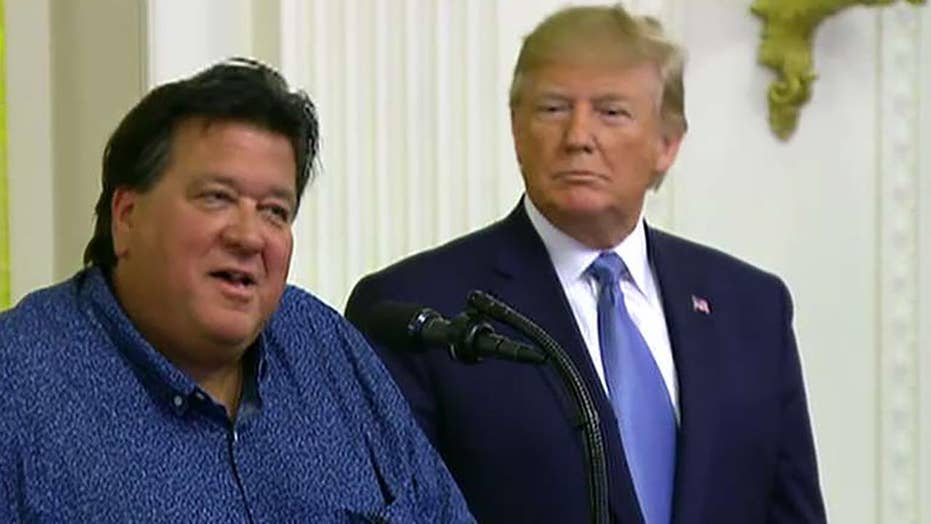 Billy Bones Bait and Tackle owner Bruce Hrobak speaks out after his 'amazing' trip to the White House.

A Florida fisherman delivered a full-throated endorsement of President Trump's environmental policies Monday at the White House, crediting the administration's efforts with helping turn his business around.

Bruce Hrobak, the owner of Billy Bones Bait and Tackle in Port St. Lucie, Florida, joined "Fox & Friends" Tuesday to explain how the administration helped combat the "red tide" of toxic algae that was devastating his business.

"The president loves everybody and I just don't get why people give him a hard time. He's a great guy and I was proud and honored to meet him," said Hrobak, who shouted "Trump 2020" into the microphone at the end of his show-stealing appearance.

Hrobak made the president and the audience laugh a few times, joking that his wife isn't "yelling at him as much" and that his father looked a little bit like Trump.

Hrobak said his business suffered in recent years because people were scared away by the toxic algae, which has now subsided near his bait shop. He also touted the administration's efforts to speed up repairs on the Herbert Hoover Dike.

"He wouldn't allow all this money to go improving things if he didn't care. That's my personal opinion," he said.

In a White House speech that exhaustively documented his administration's environmental efforts, Trump issued a new denunciation of the Green New Deal championed by top Democrats including New York Rep. Alexandria Ocasio-Cortez, saying the proposal would devastate the economy and hit minorities the hardest.

The address was aimed at publicizing the often under-reported work by the Environmental Protection Agency (EPA), as well as firing a political shot across the bow of Democrats who largely have dominated the conversation on climate change and related issues.

It came as polls have shown Americans increasingly voicing concern over the environment.

"We have only one America. We have only one planet," Trump said at one point. But, "while we're focused on practical solutions, more than 100 Democrats in Congress now support the so-called Green New Deal. Their plan is estimated to cost our economy nearly $100 trillion -- a number unthinkable, a number not affordable even in the best of times."

“President Trump’s record on the environment is pathetic and an embarrassment to the world,” Sanders, I-Vt., wrote. “This is a man who still thinks climate change is a ‘hoax.’ He better start listening to scientists and not his friends in the fossil fuel, chemical, and big agribusiness industries.”

Inslee, who has made climate change the central issue for his campaign, tweeted throughout the event.

"As Trump touts his administration’s environmental ‘accomplishments,’ a reminder that the EPA is run by a coal lobbyist, Interior is run by an oil lobbyist and Energy is run by someone who wanted to abolish the department," he tweeted.