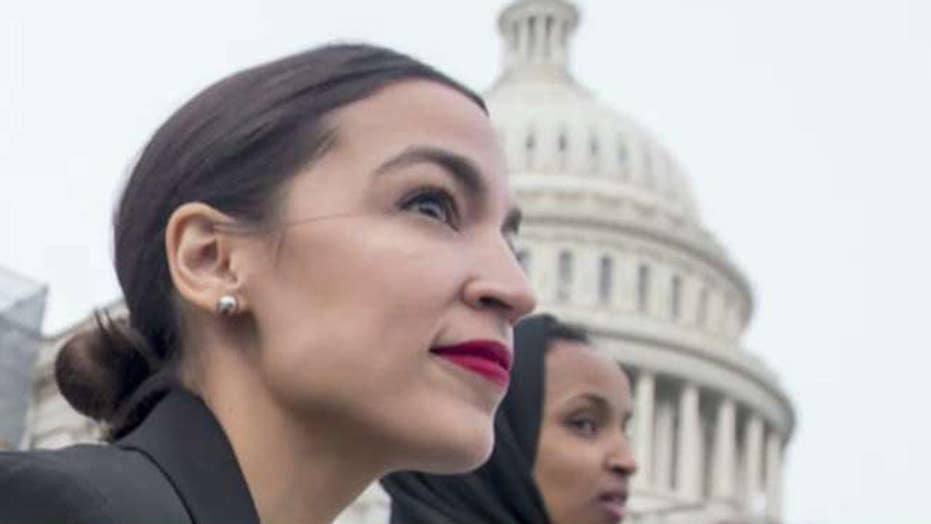 Is the Green New Deal aspirational or meant to be taken seriously?

The sweeping "Green New Deal" proposed by Rep. Alexandria Ocasio-Cortez, D-N.Y., could cost as much as $93 trillion, or approximately $600,000 per household, according to a new study co-authored by the former director of the nonpartisan Congressional Budget Office.

The sobering and staggering cost estimate came as Democratic presidential hopeful Kamala Harris pointedly declined in an interview broadcast Sunday to put a price tag on the Green New Deal and "Medicare-for-all," saying "it's not about a cost," but rather return on investment. The Green New Deal's botched rollout included the release of an official document by Ocasio-Cortez's office that promised economic security even for those "unwilling to work," and called for the elimination of "farting cows" and air travel.

At the same time, "the breadth of its proposals makes it daunting to assess the GND (Green New Deal) using the standard tools of policy analysis," the study stated, noting that "many of the policies proposed in the GND are redundant with other aspects in it, which also complicates a precise analysis, as the interactions are difficult to predict."

Sen. Dianne Feinstein is not apologizing for her clash with youth climate change advocates after taking heat from Rep. Alexandria Ocasio-Cortez.

Nevertheless, Holtz-Eakin, who previously served as an economic adviser to John McCain's 2008 presidential campaign, assessed that the resolution's sweeping jobs guarantee would likely run somewhere between $6.8 trillion to $44.6 trillion, or approximately $49,000 to $322,000 per household.

Universal health care would tally roughly $36 trillion, according to the study. That aligns with other figures: According to the nonpartisan Mercatus Center at George Washington University, for example, Ocasio-Cortez's plan for universal Medicare would end up costing more than $30 trillion, even after factoring in the sweeping tax hikes that would offset the expense by only about $2 trillion.

AOC ADVISER ADMITS HE WAS WRONG, ACKNOWLEDGES GREEN NEW DEAL DID INCLUDE MONEY GUARANTEE FOR THOSE 'UNWILLING' TO WORK

Charles Blahous, a senior strategist at the Mercatus Center and an author of its study, later charged that Ocasio-Cortez had wildly misinterpreted his findings to try to argue that "Medicare-for-all" would save money.

The cost of a 10-year transition to an exclusively low-carbon electricity grid: $5.4 trillion. Net-zero emissions from the transportation network, to the point that air travel is no longer a necessity: from $1.3 to $2.7 trillion. Guaranteed green housing, including potential building renovations: $1.6 to $4.2 trillion. Food security for every living person in the U.S.: $1.5 billion.

The study acknowledged that some double-counting may have occurred, due to apparent flaws in the Green New Deal resolution introduced by Ocasio-Cortez in Congress earlier this month.

"A costly retrofitting of every structure in the United States seems considerably less environmentally beneficial once the electricity grid is completely transformed to use 100 percent clean energy than it would be if undertaken with today’s energy mix," the study stated. "Such a retrofit would have no impact on emissions. Similarly, the GND promises to ensure that every person has a guaranteed job, a family-sustaining rate of pay, and benefits such as paid leave and paid vacations. If everyone has good pay with good benefits, why is it simultaneously necessary to provide targeted programs for food, housing, and health care?"

On high-speed rail, the study relied principally on figures from California -- where state Democrats recently abandoned a beleaguered rail project after numerous delays and cost overruns. The Trump administration has suggested it will sue California to reclaim billions of dollars spent on the botched project.

In her remarks Sunday, Harris suggested that the return on investment from the Green New Deal would make the project worthwhile, despite a high initial cost.

"One of the things that I admire and respect is, the measurement that is captured in three letters: ROI," Harris told CNN's John King. "What's the return on investment? People in the private sector understand this really well. It's not about a cost. It's about an investment. And then the question should be, is it worth the cost in terms of the investment potential? Are we going to get back more than we put in?"

But, the study found that total savings would pale in comparison to the prohibitive price tag of the sweeping proposal.

Cows have been targeted for potential elimination in the Green New Deal. (iStock, File)

"The GND envisions enough high-speed rail to make air travel unnecessary. We conclude that the rail itself would cost between $1.1 and $2.5 trillion," the study stated. "As a matter of perspective, total 2017 revenue in the airline industry was $175.3 billion, with expenses of $153.9 billion. Fuel expenses were $26.3 billion. It would take decades to pay off the capital investment required for [high-speed rail], and the fuel savings that would presumably be the most important cost difference would only be a fraction of the total investment required."

Separately, on energy, the study found that electricity costs, optimistically, could be expected to increase by 22 percent and that "with an average monthly electric bill in 2017 of $111, the average household could expect around $295 of increased annual expenditures on electricity."

"Total retail revenue in the electric power sector was $390 billion in 2017," the study found. "Generation costs were 59 percent of that, and would go from $230 billion to $387 billion each year in the above scenario, about a $157 billion difference, though if $70.5 billion of annual fuel costs are avoided by 2029 the net annual difference falls to $86.5 billion. That increase (accounting for avoided fuel costs) would drive up total electricity costs by 22 percent."

On Friday, a group of children visiting California Democratic Sen. Dianne Feinstein's office suggested that cuts to "the military" could pay for the Green New Deal, after Feinstein said that it was impossible to afford the planned legislation as-is. The fiscal-year 2019 budget for the military includes under $700 billion in appropriations -- far less than the $93 trillion estimate from the American Action Forum.

On Monday, protesters from the same group that organized the children's trip -- the Sunrise Movement -- flooded the office of Senate Majority Leader Mitch McConnell, R-Ky., and several reportedly were arrested. Democrats recently have complained that McConnell was "rushing" a vote on the Green New Deal resolution.

Meanwhile, the White House has shown signs it's angling for socialism to become the defining issue in the 2020 debate amid Democrats' evolving vows for higher minimum wages and a new array of costly, universal benefits. Even some labor leaders -- who represent typically Democrat-leaning rank-and-file constituents -- have pushed back in recent weeks against the Green New Deal, saying its call for a total economic transformation could lead to widespread poverty.

Aside from the Green New Deal, conservative commentators have argued that most proposed solutions to climate change would do more harm than good, and also have accused climate activists of crying wolf. In 2006, a NASA scientist declared that the world had only 10 years to avert a climate catastrophe -- a deadline that has come and gone.