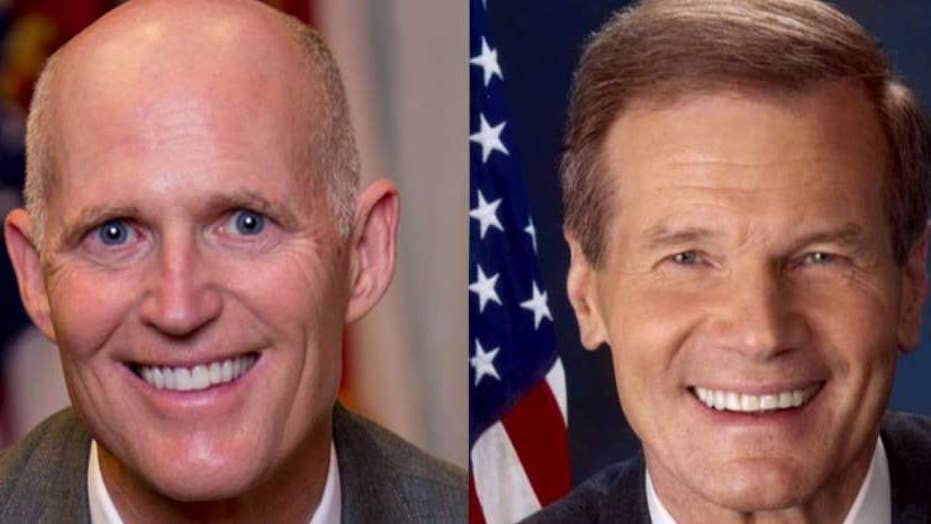 Accusations of fraud as Florida Senate race between Rick Scott and Bill Nelson appears headed to a recount; reaction and analysis on 'The Five.'

A Florida supervisor of elections who was ordered to turn over any duplicate, “overvoted” or “undervoted” ballots by Saturday morning has requested an emergency hearing and filed for an extension, a move that’s been condemned by Republican Rick Scott's campaign as “embarrassing and unacceptable.”

Palm Beach County Supervisor of Elections Susan Bucher filed on Friday, asking that a hearing be held in response to the judge’s earlier decision in favor of Scott.

Circuit Judge Krista Marx ruled that Bucher must provide the county canvassing board with any duplicate ballots and any “overvoted” or “undervoted” ballots that it doesn't already have by no later than 10 a.m. Saturday.

Bucher, whose requested hearing was scheduled for 8:30 a.m. Saturday, has asked for more time to comply with the judge’s directive.

The move was slammed by Scott’s campaign.

“Tonight, Palm Beach County Supervisor of Elections Susan Buchar (sic) announced that she is refusing to comply with a court order to submit overvotes and undervotes to the Palm Beach County Canvassing Board for review under the court-ordered deadline,” Chris Hartline, Scott for Florida spokesman, said in a statement. “Susan Buchar (sic) has consistently refused to follow state law and comply with legally required deadlines and regulations.”

Hartline continued: “Whether it’s gross incompetence or intentional disregard for the rule of law is irrelevant at this point. Either way, it is embarrassing and unacceptable.”

FLORIDA RACES COULD HEAD TO RECOUNT: A LOOK AT PAST EFFORTS IN US HISTORY

Scott – who is narrowly leading in the state’s election for a U.S. Senate seat against longtime incumbent Democratic Sen. Bill Nelson – filed a lawsuit with the National Republican Senatorial Committee (NRSC) against Palm Beach County. They alleged that Bucher illegally used her own discretion to determine voter intent when reviewing damaged or incorrectly filled-out absentee ballots while refusing to allow impartial witnesses to monitor the process.

"Even more alarmingly," Scott claims, Bucher "failed to allow the Palm Beach County Canvassing Board" to determine, as required by law, which damaged or improperly filled-out absentee ballots were valid and how the voters of those ballots had intended to vote. Instead, Scott and the NRSC argue, Bucher and her staff simply used their own judgment when determining voters' intent.

Scott and the NRSC also filed a lawsuit against Broward County.

Fox News’ Heather Lacy and Alex Pappas and The Associated Press contributed to this report.