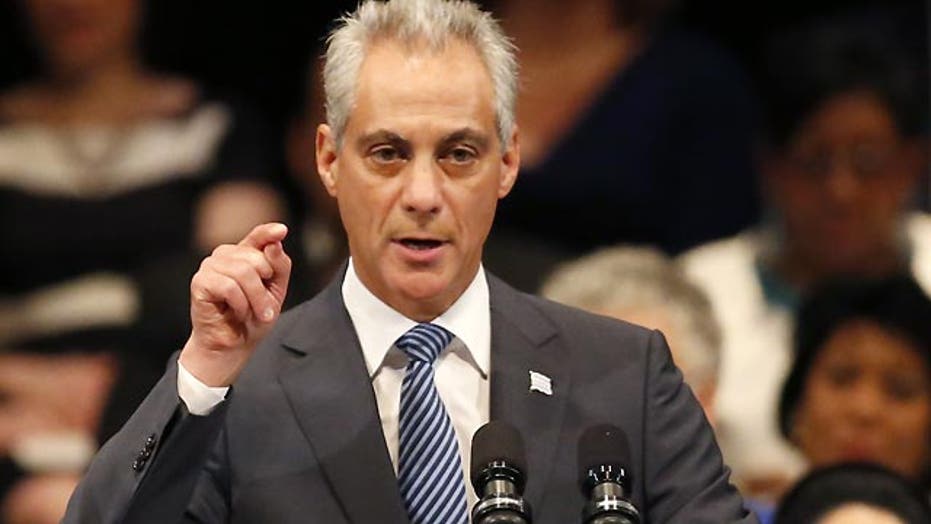 A few months ago, winning re-election was Chicago Mayor Rahm Emanuel’s biggest problem. Now, his problem seems to be that he won. His prize is a mountain of financial problems, so severe that the ongoing gunfire in the rough parts of town is taking a back seat.

On May 12, Moody’s Investor Service gave Chicago a double-notch downgrade to its credit rating, leaving municipal bonds at “junk” status. According to Ted Dabrowski at the Illinois Policy Institute, public employee pensions are so underfunded, the shortfall will nearly equal six times the annual budget for the city. The pension debt – quadruple what it was a decade ago – works out to $60,000 per Chicago household.

“Chicago, I think by any measure, is already broke,” said Dabrowski. “Eventually, you’ll find a situation where Chicago can’t fund itself.”

However, this is Emanuel’s second term. It’s his debt crisis now and his detractors say he should own it -- and charge he's missed past chances to stop the bleeding. Particularly, they point to his standoff with the Chicago  Teachers Union in 2012, when the mayor caved and gave teachers a raise in the face of a billion-dollar budget shortfall.

“They have not made the pension payments that they knew they were going to have to make down the road and that has made a very bad situation worse,” said Thomas Corfman at Crain’s Chicago Business. “The Emanuel administration, they have acted like they thought this day would never come, that they would not have to pay pensions eventually, it would work out some way.”

Even in his inaugural address, Emanuel breezed over the financial difficulties, with only one line mentioning them. To find another public comment, one needs to go back to May 6, when he spoke to the City Council. “If we do not address our financial challenges today, the consequences will be felt for years to come,” Emanuel said.‎

At that same meeting, Bruce Rauner, the new Republican governor of Illinois said the state has its own unfunded pension obligation, and Chicago is on its own. “Illinois as a state is in a terrible financial crisis. We don’t have the money to simply bail out the city of Chicago. It’s not an option,” said Rauner.

Bankruptcy is not legal – at the moment. The state Supreme Court said pensions are sacred, so defaulting is not an option. Tax hikes are often floated as an option, but experts say people can just move out of a city to dodge them, the base shrinks and the municipality ends up with less revenue.

Now Emanuel, famous on the national stage largely for his connections and unrelenting ambition, finds himself bogged down with local problems. “Everybody thought of Rahm Emanuel as a future contender for the White House," Dabrowski said, "but it’s going to be very difficult for him to ever think about that if he can’t right Chicago’s Ship.”