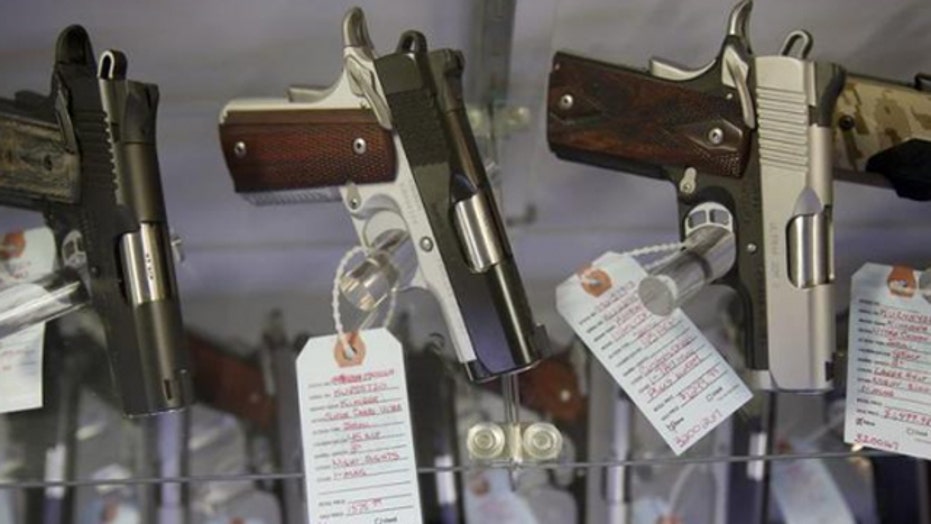 Mike Schuetz operates a small gun shop in northern Wisconsin called Hawkins Guns. In November, just before one of his peak selling times, his local credit union notified him his account needed to be closed.

"The bank manager said they made a mistake, and they were not supposed to open accounts for those people involved in high-risk industries, which the gun industry and ammunition industry is one of those," Schuetz said.

It turned out there was a list created by a Justice Department program called Operation Choke Point. The list equates legal gun sellers like Schuetz with escort services, Ponzi schemes, people who sell cable TV de-scramblers -- and at least 30 other industries.

The program, which is facing tough questions in Congress, intimidates banks with the threat of heightened scrutiny and increased audits if accounts are maintained in those industries.

Rep. Sean Duffy, R-Wis., said Operation Choke Point began as a means of combating fraudulent businesses -- but evolved into an arbitrary list of businesses targeted by bureaucrats in the DOJ and banking regulators purely on moral grounds, backed by no legislation

In northern Wisconsin, Schuetz became suspicious that something strange was happening after his issue with the local credit union. So he concealed an audio recorder and visited his credit union.

A manager and then a regional manager told Schuetz the credit union wanted his business, but he had indeed been placed on a list of "high risk" industries.

"We're really not anti-gun as a company but our hands are tied, and I feel horrible about this. I didn't sleep last night," regional manager Troy Ewer said.

Fox News found several more businesses -- from payment processors to ammunition dealers to pawn shop owners to short-term lenders -- who all had their bank accounts closed. In response to an inquiry from Fox News, a spokesman for the DOJ wrote, "We do not target businesses operating within the bounds of the law, and we have no interest in pursuing or discouraging lawful conduct."

Fox News was provided a DOJ memo in reference to short-term or payday lenders that seems to suggest an indifference to harming legal businesses. "Although we recognize the possibility that banks may have therefore decided to stop doing business with legitimate lenders, we do not believe that such decisions should alter our investigative plans," Michael Blume, director of the department's Consumer Protection Branch, wrote.

A spokesman for the DOJ said that the "high-risk merchants" list was produced by the FDIC.

However, Brian Wise, of the U.S. Consumer Coalition, pointed out that the FDIC sits on the Financial Fraud Enforcement Task Force, which is the driving force of Operation Choke Point and is chaired by U.S. Attorney General Eric Holder. Also, starting in August of 2013, the DOJ issued subpoenas to banks and payment processors.

The spokesman also said the FDIC has since rescinded the "high-risk merchants" list.

Wise, with the Consumer Coalition, says there are hundreds and even thousands of businesses across the nation who have had bank accounts closed, and they may not even know their bank was intimidated by Operation Choke Point. "This is one of the greatest abuses of power that the country has never heard of," Wise said.

The businesses owners who spoke to Fox News say they have been able to find alternative bank accounts, even Mike Schuets. However, Duffy thinks those accounts will only stay open until federal investigators scrutinize the alternative banks.

"They might be able to get banked for a short time, but once that bank goes through its next examination, Hawkins Guns might find itself without a bank," he said.

Schuetz was told by his local credit union, after an overhaul, they may be able to accommodate his business in February. However, he says he would have lost his business if he didn't find somewhere to bank between November and February.