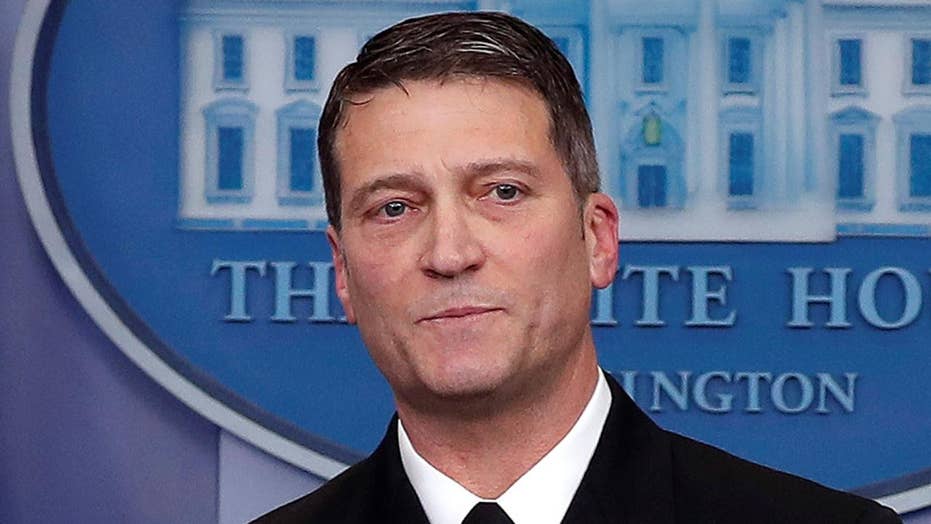 “Ronny’s positive impact cannot be overstated. He is a tremendous asset to the entire White House team. Already at a level of performance and responsibility that far exceeds is current rank, promote to Rear Admiral now,” said an undated performance review that was signed by Obama.

The former president sent years of positive reports about Trump’s White House doctor, who is giving no indication he will withdraw his nomination for the V.A.

Obama said in October 2014: “A most impressive leader who continues to perform at the Flag Officer level. Ronny has earned my confidence and the gratitude of my family for his diligence and knowledge. Promote to Flag immediately.”

Obama said in October 2016: “Ronny does a great job — genuine enthusiasm, poised under pressure, incredible work ethic and follow through. Ronny continues to inspire confidence with the care he provides to me, my family and my team. Continue to promote ahead of peers.”

However, a 2012 watchdog report claimed Jackson exhibited “unprofessional behaviors” amid a power struggle over the White House medical unit.

Counselor to President Trump says Dr. Ronny Jackson has no plans to withdraw his nomination to head the Department of Veterans Affairs, cites fitness reports from President Obama as defense of the White House vetting process.

The Senate Veterans Affairs Committee postponed its confirmation hearing for Jackson, scheduled for Wednesday. Jackson said he was “disappointed” over the news.

“Dr. Jackson’s record as a White House physician is impeccable. He has improved unit morale, received glowing reviews and promotions under Republican and Democrat presidents, and has been given a clean vet from the FBI. He has never even been the subject of an Inspector General review and he will certainly not be railroaded by a bitter ex-colleague who was removed from his job,” a senior White House official told Fox News.

A person who viewed the 2012 report confirmed to Fox News on Tuesday that the watchdog had recommended the Obama administration consider replacing either Jackson or his rival, Dr. Jeffrey Kuhlman — or both. The report initially was reviewed by The Associated Press.

At the time of the report, Kuhlman was the physician to the president. Kuhlman left the White House in July 2013 and Jackson was named as his successor.

News of the report broke hours after Trump told reporters that if he were Jackson, “I wouldn’t” continue to seek the position, amid allegations that Jackson has overseen a hostile work environment as White House physician, including claims of drinking on the job and allowing the over-prescription of drugs.

Trump says he hasn’t heard of allegations against his pick to head the Department of Veterans Affairs, slams Democrats for obstructing presidential appointees and said Jackson would make the decision on whether to continue with the confirmation process.

The six-page report included no references to improper prescribing or the use of alcohol. However, it did describe a lack of trust in the leadership and low morale among staff members. The document described the working environment as akin to “being caught between parents going through a bitter divorce.”

Veterans Affairs Committee Ranking Member Jon Tester, D-Mont., said to NPR that his panel was told Jackson was "repeatedly drunk" while on travel with Obama and that on overseas trips Jackson improperly handed out prescription drugs to help travelers sleep and wake up.