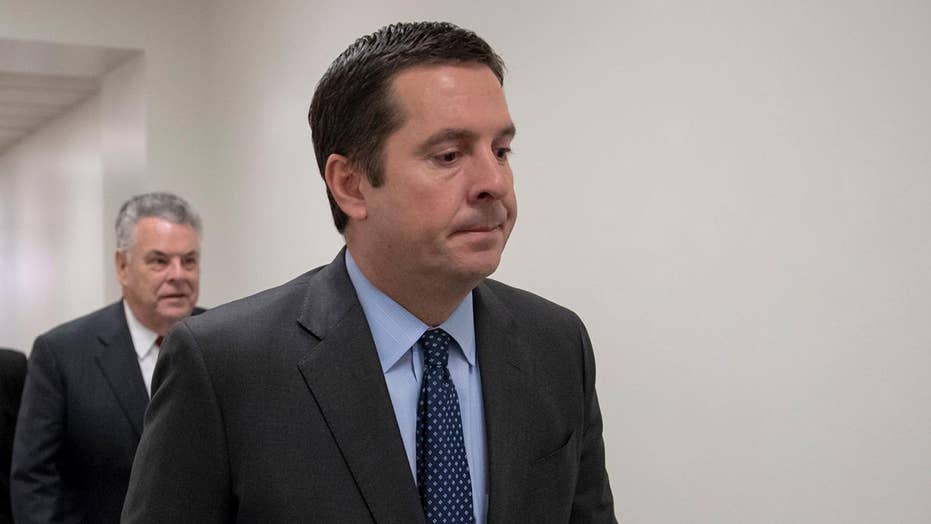 Rep. Nunes says he will push to hold Sessions in contempt

House Intelligence Committee Chairman Devin Nunes says on 'Fox & Friends' that he plans to press for holding Jeff Sessions in contempt over the DOJ's failure to provide information to Congress.

The Californian Republican’s committee has been looking into allegations that the Justice Department and the FBI abused the Foreign Intelligence Surveillance Act in their scrutiny of the Trump campaign.

"On Thursday we discovered that they are not going to comply with our subpoena," Nunes said on "Fox and Friends," adding, "The only thing left to do is we have to move quickly to hold the attorney general of the United States in contempt and that is what I will press for this week."

Two weeks ago, Nunes sent to Sessions a classified letter, which he said was not acknowledged, and then he sent a subpoena.

However, the Justice Department said it responded to Nunes' letter, as Maria Bartiromo reported on "Sunday Morning Futures."

"The Department has determined that, consistent with applicable law and longstanding Executive Branch policy, it is not in a position to provide information responsive to your request regarding a specific individual," Assistant Attorney General Stephen E. Boyd wrote in the signed letter. "The Department and its intelligence community partners would welcome the opportunity to discuss whether there are other ways to accommodate the House Permanent Select Committee on Intelligence's oversight inquiry."

Nunes, who did concede that it’s possible Sessions personally is unaware of the subpoena, told "Fox and Friends" he wouldn’t accept "excuses" relating to national security concerns in terms of his ongoing investigation of how the Russia probe was handled.

"How many times have we heard this argument throughout this investigation?" he asked.

"I have deeper and deeper concerns the more I see some of this, not only the stonewalling, but what’s been in some of these memos," said Scalise. "We’re also trying to get a lot of other information from the Department of Justice about this investigation, and everything that we uncover raises even deeper concerns about the direction."

As Fox News has reported, Nunes called the FBI and Justice Department redaction of his committee's Russia report "excessive and sloppy." The House committee's report found that FBI agents "did not detect any deception during [Michael] Flynn's interview.”

"This just cannot continue where we don't get information in a timely manner. Like I said, everything we have tried to get they tried to stop us from getting,” Nunes said.