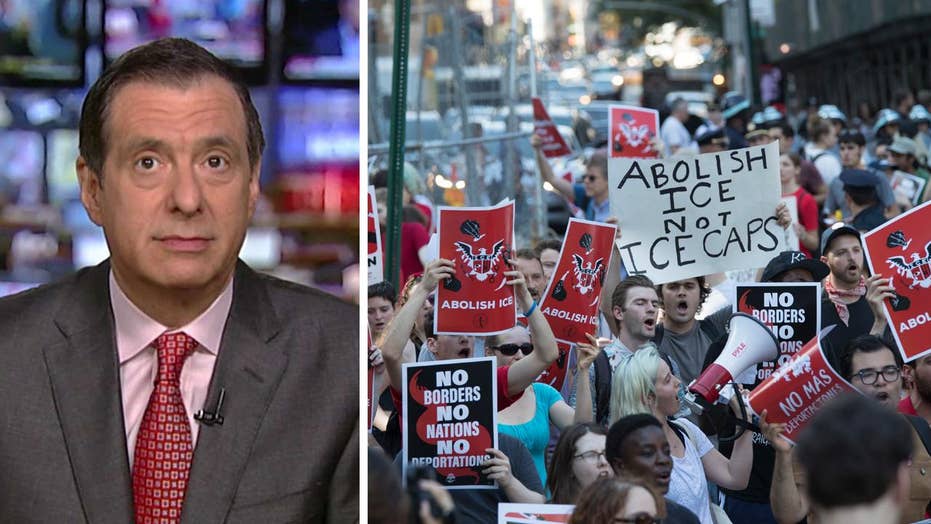 Kurtz: Why the 'Abolish ICE' crowd could hurt the left

'MediaBuzz' host Howard Kurtz weighs in on how Democrats are risking a backlash with hardball tactics on immigration and the recent Supreme Court decisions.

The Democratic Party is suddenly lurching left in ways that may be self-destructive.

And it's driven in large part by 2020 politics.

Two or three weeks ago, the Democrats were riding a wave of moral outrage and favorable media coverage. Most of the country agreed that President Trump's policy of separating families at the border was wrong and rather heartless. The White House was awash in contradictory messages and some leading conservative voices were demanding that the president stop a policy that he insisted he had no power to halt. When Trump reversed himself, it was a rare win for the Democrats, who control nothing in Washington, and for journalists and commentators who were emotionally invested in the border issue.

But then the Democrats overreached. Several senators who are all but campaigning for president started calling for the Immigration and Customs Enforcement (ICE) agency to be abolished, or replaced with something else.

We heard this from Elizabeth Warren and Kirsten Gillibrand and Kamala Harris. Their calculation, undoubtedly, is that the Democrats who will turn out to vote in the 2020 primaries detest not only the president but his immigration policies. This view may have been reinforced by 28-year-old Latino newcomer Alexandria Ocasio-Cortez, a self-proclaimed socialist who knocked off House Democratic leader Joe Crowley.

But the problem is that "abolish ICE" is exactly the kind of stance that drives away moderates and independents who want some border enforcement. It is easily caricatured as a call for open borders, and Trump hasn’t hesitated to make that argument. "You get rid of ICE, you're going to have a country that you're going to be afraid to walk out of your house," the president told Fox’s Maria Bartiromo.

The rhetoric by these Democrats reminds me of when Ron Paul, in his crusade against oppressive taxes, would call for the elimination of the IRS.

And it takes time for politicians to explain that, well, we really just mean reform the agency into a more humane bureaucracy.

So rather than making a case against young children being separated from their parents, the Democrats have moved the debate to the existence of a border patrol agency, basically because that animates their most liberal voters.

Two other developments have put the Dems on the defensive.

Many liberal voices have defended the hounding of Trump administration officials, from Sarah Huckabee Sanders to Kirstjen Nielsen to Stephen Miller. When Maxine Waters called for continued "harassment" of Trump Cabinet officials, Chuck Schumer and Nancy Pelosi had to distance themselves from her rhetoric. While the Democrats can fairly retort that Trump uses rough language and tactics, do they really want to position their party as favoring personal harassment of government officials?

And the retirement of Anthony Kennedy has sparked a media debate in which liberal commentators are demanding that Democrats block any vote on any Trump nominee this year. Obviously, the Democrats say this is payback for what Mitch McConnell did in stiffing Merrick Garland in 2016. But just as obviously, by taking this stance even before Trump’s pick next week, they leave themselves open to charges of obstruction.

The Washington Post recognized these problems in a front-page story yesterday:

"Growing liberal agitation over a pivotal Supreme Court retirement and a simmering crisis about immigrant child separation have left Democratic leaders scrambling to keep the political outrage they'd counted on to fuel midterm election wins from becoming a liability for the party."

The paper also noted that Bernie Sanders-style rhetoric, including "costly guarantees of government jobs, free health care and free college could backfire in parts of the country where Trump won in 2016, and where Democrats will have to win in November to reclaim control of Congress."

And that's the problem. What plays in the Bronx may be politically toxic in West Virginia and North Dakota, which are among the states where moderate Senate Democrats are trying to hang onto their seats.

A handful of presidential aspirants don't speak for the whole party. But they get outsized media attention when they embrace positions like getting rid of ICE, especially in a party that for now is shut out of power and has no natural leader.