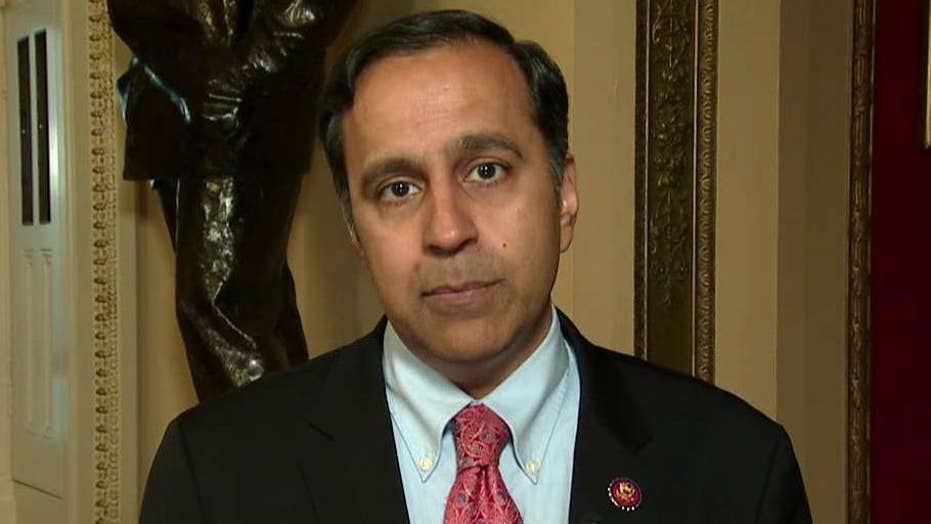 Rep. Raja Krishnamoorthi lays out what it would take for Democrats to move on from impeachment

Making the case for access to special counsel Robert Mueller's unredacted report, Illinois Congressman Raja Krishnamoorthi, Democratic member of the House Oversight Committee, says if it is ultimately determined that there was no obstruction of justice or criminal conspiracy, Democrats would 'absolutely' move on from impeachment.

House Oversight Committee Member Raja Krishnamoorthi said Thursday that Congress' continuing demands for information from the White House and others in President Trump's orbit should not be seen as a "partisan issue."

"Right now we need to have cooperation from the executive branch to make sure we can ... perform a constitutionally prescribed duty of oversight," he said on "Outnumbered Overtime."

On Wednesday, the House Judiciary Committee voted along party lines to hold Attorney General William Barr in contempt of Congress for failing to turn over the full and unredacted Mueller report.

"As you know in this country, we don't have a king. We have a president accountable to the people," Krishnamoorthi said. "This is not a partisan issue as far as I'm concerned."

He said that his fellow Democrats will "absolutely" move on from calls for impeachment if they ultimately determine that no obstruction of justice took place.

Krishnamoorthi pointed out that some Republicans are now calling for additional oversight in regard to the Mueller investigation, with the GOP-led Senate Intelligence Committee subpoenaing Donald Trump Jr.

He said that members of the committee appear to believe that Trump Jr. last testified in a way "which appears to be at odds with what was reported in the Mueller report."

"I think Senator Burr ... a Republican, is rightfully bringing him in to basically try and account for the discrepancy in the testimony," Krishnamoorthi said.

Responding to the news, President Trump said his eldest son is a "good person" and that he previously heard Burr say that there was no evidence of collusion with Russia.

"The last thing [Trump Jr.] needs is Washington, D.C. He'd rather not be involved," Trump said.