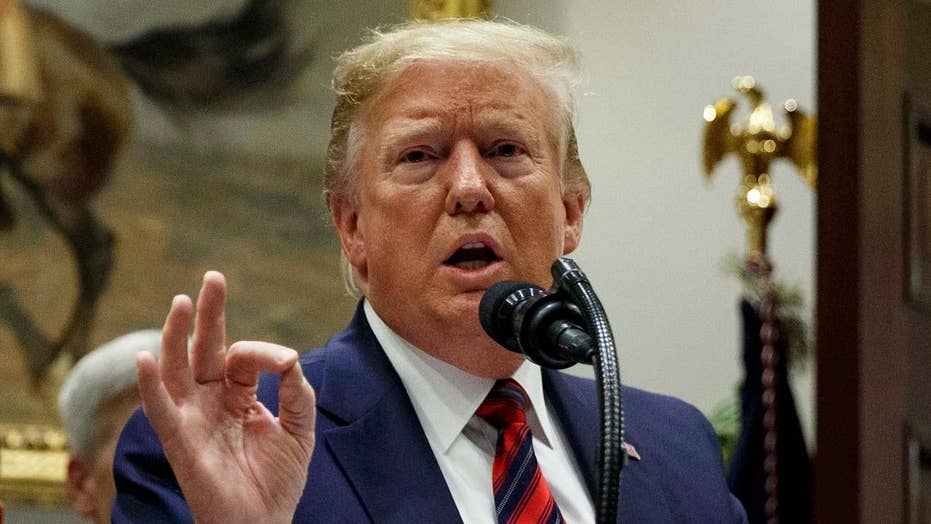 The 'Outnumbered' panel agrees that the president is 'smart' to be getting ahead of the issue early in the campaign.

President Trump hit back Thursday at the Senate Intelligence Committee’s move to subpoena his eldest son, Donald Trump Jr., while accusing Democrats pursuing Russia-related investigations even after the closure of Robert Mueller's case of "conning" the country.

In the Oval Office, Trump was asked about the subpoena issued to Trump Jr. on Wednesday evening as part of the committee’s Russia investigation.

“I was very surprised. I saw [Chairman Richard] Burr saying there was no collusion two or three weeks ago,” Trump said. “I was very surprised to see my son—my son is a good person, he works hard. The last thing he needs is Washington, D.C. He’d rather not be involved.”

“My son is a good person. He testified for hours and hours. My son was totally exonerated by Mueller who doesn’t like Trump, me,” Trump continued. “And for my son, after being exonerated to now get a subpoena to speak again after telling everyone about a nothing meeting, I’m pretty surprised.”

He added: “I’m just very surprised. I really am.”

The president was asked whether he would block his son from complying with the subpoena, after last month vowing to fight “all” subpoenas issued to administration officials and individuals close to him.

The committee, led by Republican Chairman Richard Burr, R-N.C., and Ranking Member Mark Warner, D-Va., has been investigating Russian interference for the last two years. Burr and Warner issued the subpoena over remarks Trump Jr. made while testifying before the panel in 2017.

One source close to the president's son told Fox News that he has been trying to accommodate the committee's request for more information, but the committee has been making unreasonable demands.

Fox News is told the committee sought an extensive appearance covering many topics, which one source described as a "complete redo." Sources close to Trump Jr. called the subpoena a political stunt.

The committee’s demand to have Trump Jr. testify again reportedly is related to former Trump attorney Michael Cohen’s testimony earlier this year. Cohen, who reported to prison this week to begin a three-year sentence, told a House committee that he had briefed Trump Jr. approximately 10 times about a plan to build a Trump Tower in Moscow.

But in 2017, Trump Jr. told the Senate Intelligence Committee he was only “peripherally aware” of the proposal.

Trump Jr. has testified before congressional committees multiple times as part of their Russia investigations. Trump Jr. first fell under scrutiny in the early summer of 2017, after it was revealed that he helped to organize, and then attend, a meeting with Russian lawyer Natalia Veselnitskaya in Trump Tower in New York City. The meeting was initially billed as one where Trump Jr. and members of the Trump campaign could obtain “dirt” on Hillary Clinton for their benefit in the 2016 election. The meeting apparently did not reveal any dirt on Clinton, but Trump Jr., Trump son-in-law Jared Kushner, and former Trump campaign chairman Paul Manafort attended the June 2016 meeting. Special Counsel Robert Mueller also investigated the meeting.

.@DonaldJTrumpJr has already spent dozens of hours testifying in front of Congressional committees. Endless investigations--by either party--won’t change the fact that there was NO collusion. It’s time to move on. It’s time to focus on ISSUES, not investigations,” McCarthy tweeted Wednesday.

“Now, guys like Nadler, who I fought for years successfully in New York…now I have to beat him again,” Trump said. “Over nothing. Over a hoax. They know it’s a hoax. Nadler is a smart guy. Schiff is a smart guy.”

He added: “But when Schiff goes to the microphone, he’s conning this whole country, and he knows this, and after, he goes back into a room and talks to his friends and he laughs.”

The president also was asked whether Special Counsel Robert Mueller would be allowed to testify before Congress, a decision, he said, he would leave up to Barr. It is unclear if that decision, though, would be made by the attorney general.

“I’m going to leave that up to our great attorney general. He’ll make a decision,” Trump said, again touting his cooperation with the nearly two-year-long investigation. “No collusion and no obstruction. People say, how can you obstruct when there was no crime? It’s worse than that. Not only was there no crime, the crime was on the other side.”

The president’s comments about “the other side” come after Barr has vowed to review the “origins” of the Russia investigation at the FBI and the Justice Department. Justice Department Inspector General Michael Horowitz is also investigating alleged misconduct related to Foreign Intelligence Surveillance Act (FISA) warrants. That probe is expected to be complete in the coming weeks.

“After spending all that money, all that time, two years, they come up with a report,” Trump said. “Mueller is no friend of mine. So I’ll leave it to the attorney general. To me, it looks like a re-do.”

The president's comments on Thursday come after the House Judiciary Committee voted to hold Barr in contempt of Congress for defying a subpoena for Mueller's unredacted Russia report and underlying documents, after the president asserted executive privilege in a bid to protect those files from release.

“We did not relish doing this, but we have no choice,” Nadler said after the vote, adding, "We’ve talked for a long time about approaching a constitutional crisis. We are now in it."