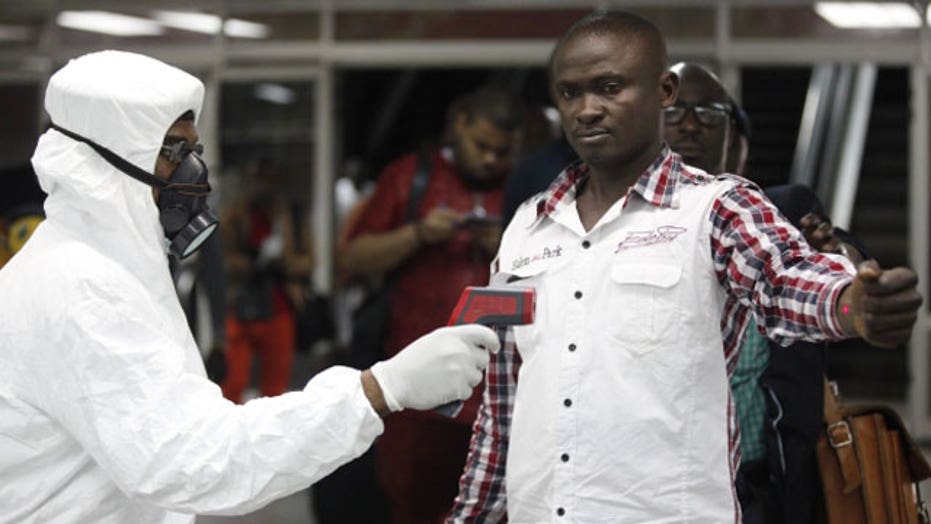 Should air travel from Ebola hot zones be restricted?

WASHINGTON – Lawmakers and infectious disease experts are examining whether terrorists could use Ebola to deliberately infect and wreak psychological havoc on an unsuspecting population.

“I do, at some level, think the government should be concerned about [weaponization], because if it does happen it could be devastating,” said Amanda Teckman, who published a detailed report, “The Bioterrorist Threat of Ebola in East Africa and Implications for Global Health,” in the May 2013 issue of Global Policy.

It sounds like the stuff of science fiction – bad actors harnessing the virus and formulating ways to disperse it to a maximum number of victims. Cruder scenarios involve terrorists leaving “dirty bombs” of infected fluids throughout a densely populated city, or lone wolves on a suicide mission, infecting themselves to purposely spread to others.

“If you want to do the equivalent of a dirty bomb all you need is a bag of [vomit],” said Dr. Ryan Hall, a forensic psychologist who has written about psychological trauma associated with bioterrorism.

Teckman began studying this during the 2012 Uganda outbreak of Ebola, which killed 17 people. So far, the latest outbreak in West Africa has killed more than 3,000. The threat of Ebola being used for bioterror has since taken on a new urgency. “I think the government needs to be aware of this and there needs to be measures in place,” she told FoxNews.com.

Still, executing such an attack wouldn’t be easy and lawmakers largely have not been ringing the alarms about that possibility, yet.

For now, lawmakers on key security committees seem less concerned with weaponization than the accidental spread of the disease posed by the recent traveler from Liberia to Texas – or terrorists in the Middle East, for that matter.

“We face much more likely threats than a weaponized Ebola virus disease,” said Sen. Tom Coburn, R-Okla., “like homegrown extremists or ISIL or Al Qaeda coming across our southern border and detonating conventional explosives in a major metropolitan area.”

The current strain plaguing West Africa, called Ebola Zaire, has a 70 percent kill rate. So far, scientists say it cannot be transmitted through the air; only through contact with the infected person’s bodily fluids, like blood, vomit and mucus. That is why hospital officials are quarantining the family members of the man recently diagnosed in Dallas, Texas, and are waiting for signs of symptoms.

Because of its rapidly contagious nature, some have asked what might happen if it got into the wrong hands. Reportedly, the Japanese cult Aum Shinrikyo traveled to the country known then as Zaire in 1992 in search of Ebola samples. There is no evidence they succeeded in bringing any home to formulate into a spreadable contagion, but they did launch a Sarin gas attack that killed 13 people and injured 50 on a Tokyo subway in 1995.

In a September hearing on Capitol Hill, Sen. Sheldon Whitehouse, D-R.I., asked whether anybody could “make something that was more transmittable out of this existing [Ebola] virus?”

However, Fauci continued, “the only trouble is, it wouldn’t be easy for somebody to do that in their backyard laboratory. They would probably kill themselves doing that.”

He said any real attempt would probably “have to be a state thing. I don’t think you’re going to get some rogue person being able to do that.”

“Weaponization of Ebola virus disease would be technically challenging requiring experts with advanced training and equipment that would be difficult for any but a state actor to obtain,” Coburn, ranking member of the Senate Homeland Security and Governmental Affairs Committee, said in a statement to FoxNews.com.

It’s been attempted before. Former Soviet Union scientists reportedly had tried, but failed to cultivate Ebola for their own biological weapons program in the 1980’s. They were more successful with the Marburg virus, however, a deadly sister virus to Ebola, according to reports by Soviet biological warfare researcher Ken Alibek, who has testified before Congress.

But another scenario would require less know-how and could be more menacing: the “suicide bomber,” or a person or group willing put themselves at risk – even infecting themselves -- to transmit Ebola to others.

“It doesn’t take a lot of sophistication to do something really low-tech like that,” said Scott Gottlieb, a physician and former Food and Drug Administration official during the George W. Bush administration. “I think the most likely scenario – if there is one at all – would be something crude.”

In early September, a federal air marshal was stabbed by a man wielding a syringe at an airport in Nigeria, which has been dealing with its own Ebola outbreak. Tests proved there was no Ebola or any other deadly agent in the vial, but the incident sparked concerns that the virus could be deliberately spread in one swift violent act.

Calls to the Department of Homeland Security for comment were not returned, but Gottlieb suspects government agencies “have thought through these scenarios and are well aware of the risks.” Aside from standard counterterrorism surveillance, DHS currently runs the National Biodefense Analysis and Countermeasures Center, a threat assessment and bioforensics laboratory, at Fort Detrick in Maryland.