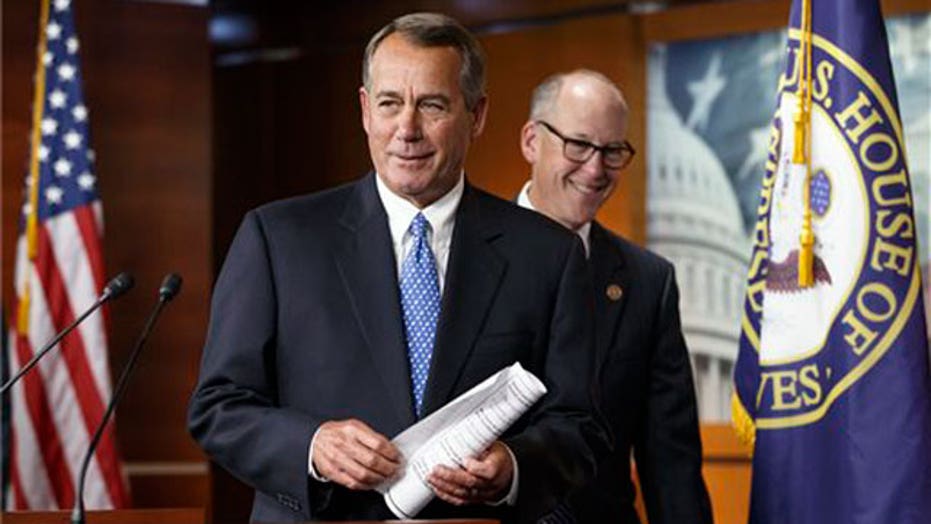 Members of Congress who return Monday to Capitol Hill for the final two weeks of their session will be faced with passing a federal budget, addressing the immigration issue, battling the Islamic State and a bundle of other concerns before leaving for the holidays.

Still, the focus will be on the Republican-controlled House, specifically whether or how members will deal with immigration reform -- and whether they will link the issue to a must-pass spending bill.

Though passing bipartisan legislation like the Senate did last year is a possibility, the lower chamber is more likely to attempt to craft a temporary spending bill that will limit President Obama’s ability to spend money to carry out the executive orders on immigration he announced in November.

And opposition from the Democrat-led Senate and White House could result in a temporary government shutdown.

Arkansas GOP Rep. Tom Cotton told NBC’s “Meet the Press” that his caucus will huddle early this week to decide on “the best way to proceed” that might include a short-term spending bill that also limits spending by the Environmental Protection Agency, which critics feel is hurting the economy by over-regulating, including putting limits on carbon-dioxide emissions from coal-burning power plants.

Congress’ to-do list also includes renewing expired tax breaks for individuals and businesses, considering Obama's requests for money to stop Ebola and the Islamic State and dealing with the influx of unaccompanied Central American children who have crossed into the United States.

Among the lower profile items on the agenda: renewing the government's terrorism risk insurance program and extending the ban on state and federal taxes on access to the Internet.

Obama's move to protect millions of immigrants from deportation proceedings and make them eligible for work permits appears to have made it more difficult to navigate the must-do items through a Capitol where cooperation already was in short supply.

The No. 1 item is preventing a government closure when the existing temporary-funding measure expires Dec. 11.

GOP congressional leaders have repeatedly said they don’t want to force a shutdown over the issue.

The House and Senate Appropriations committees are negotiating a $1 trillion-plus spending bill for the budget year that began Oct. 1 and are promising to have it ready by the week of Dec. 8.

Lawmakers probably will renew it while postponing action until 2015 on a broader, new authorization to use military force.

Senate-elects Thom Tillis, R-N,C., and Gary Peters, D-Mich., each suggested Sunday that Congress should be part the re-authorization process next year, when Republicans also control the Senate.

“I think it would probably be wise so that you move forward again,” Tillis told CBS’ “Face the Nation.” “And I think it would give Congress more confidence that they're a part of the process.”

Peters told CBS that Congress’ involvement in the process is essential.

“We have not had a classified briefing as Congress for quite some time,” he said. “Congress needs to be intimately involved in these decisions. It's certainly a constitutional requirement. And I think it is absolutely essential that we come together to show strength in the world community.”

Obama also is requesting more than $5 billion to pay for sending additional noncombat troops and munitions to Iraq and cover other military and intelligence costs associated with fighting the militants. He wants $6.2 billion to tackle Ebola at its source in West Africa and to secure the U.S. against any possible outbreak. Also pending is a $3.7 billion request to address the immigrant children.

The tax-writing committees are trying to renew a bundle of expired tax breaks, such as the deduction for state and local sales taxes and the research and experimentation credit. Some, like tax credits for renewable energy projects like wind farms, are a hard sell for GOP conservatives, but eagerly sought by Midwestern Republicans like Sen. Charles Grassley of Iowa.

The House has passed legislation that would make several of the tax breaks permanent; the Senate's approach has been to extend them only for 2014 and 2015. Negotiators appeared to near an agreement last week only to have the White House put it on ice with a veto threat. The administration said an emerging plan by House Republicans and top Senate Democrats was tilted too far in favor of businesses.

Legislation to renew the government's terrorism risk insurance program, which expires at year's end, is eagerly sought by the construction, real estate and hospitality businesses. But negotiations between the chairman of the House Financial Service Committee, GOP Rep. Jeb Hensarling of Texas, and Senate Democrats, including Charles Schumer of New York, appear to have stalled.

The annual defense authorization bill has passed every year for more than five decades and the chairmen of the House and Senate Armed Services committees are eager to avoid breaking the streak. Rep. Howard "Buck" McKeon, R-Calif., and Sen. Carl Levin, D-Mich., are both retiring after long tenures in Congress. Negotiators remain at odds over the Pentagon's cost-saving proposals to trim military benefits.

Facing diminished budgets, three defense secretaries -- Robert Gates, Leon Panetta and Chuck Hagel -- have insisted that the cost of personnel benefits have become unsustainable and threaten the Pentagon's ability to prepare the military for fighting a war. Military pay and benefits account for the largest share of the budget, $167.2 billion out of $495.6 billion.

The Defense Department has proposed a slight increase in pharmacy co-payments and a gradual reduction in the basic allowance for housing, from 100 percent for off-base housing costs to 94 percent.

The Senate Armed Services Committee endorsed the cuts, but the House committee rejected them.

Lawmakers opposed to the changes and powerful outside military organizations argue that the benefits help attract men and women to the all-volunteer force where they and their families make unique sacrifices.