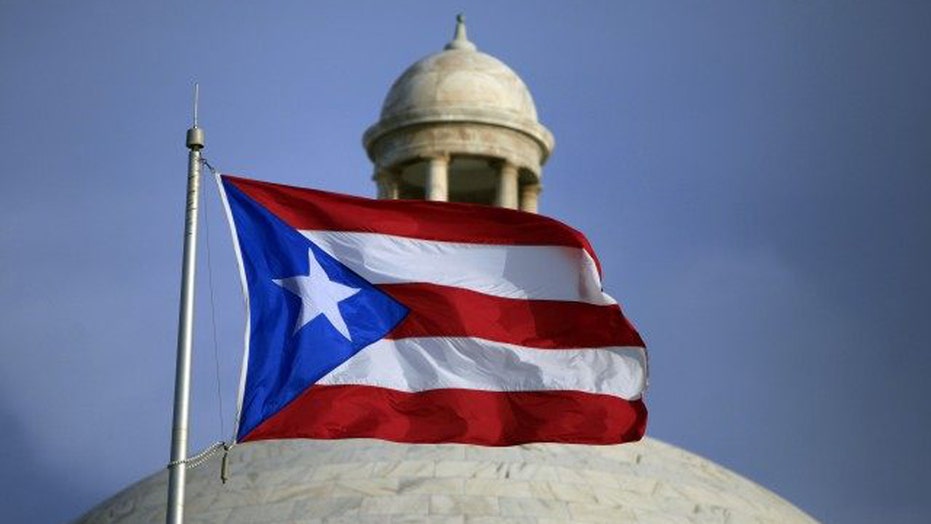 Strategy Room: Puerto Rico governor says US territory will default on $37M in interest due in January

Congress may be one of the few places where lawmakers could celebrate the rich history of a U.S. territory in an elaborate ceremony at one moment yet cast serious doubts on its future the next.

Such was the fate of Puerto Rico on Capitol Hill Wednesday.

House Speaker Paul Ryan, R-Wis., awarded the Congressional Gold Medal to the 65th Infantry Regiment, known as “the Borinqueneers” in a flourishing ceremony. The Borinqueneers were a segregated Puerto Rican regiment that fought on the front lines for the U.S. between World War I and the Korean War.

But no one unfurled flags or hummed hymns for Puerto Rico in the House Natural Resources Committee hearing room later the same afternoon. The panel was about to prep a bill to help Puerto Rico navigate its staggering $70 billion debt crisis. Instead, political realities set in, and the committee soon canceled a vote set for Thursday amid internal divisions – even as the island’s leaders warned it might have to default on an upcoming bond payment without help.

For once, lawmakers were strangely speechless.

At first, committee Chairman Rob Bishop, R-Utah, gaveled his panel to order for lawmakers to make opening statements about the Puerto Rico bankruptcy legislation. But Bishop didn’t say much. He simply entered his comments into the record.

Rep. Raul Grijalva, D-Ariz., the top Democrat on the panel, remained mute except to say he’d enter his comments into the record, too. Rep. Cynthia Lummis, R-Wyo., followed suit. So did the non-voting Resident Commissioner to Congress, Pedro Pierluisi, D-P.R.

But the only other lawmaker seated on the dais was having none of this reticence.

“Well, Mr. Chairman, since we’re all dressed up and nowhere to go, I’ll make my statement in public,” declared Rep. Tom McClintock, R-Calif.

The California Republican then read a five-minute screed warning about the legislation. McClintock objects to a prospective provision in the bill which he believes establishes a gateway for fiscally struggling states to sidestep their creditors.

“If Puerto Rico can get de facto bankruptcy protection from the loans to which it had pledged its full faith and credit, so too can California, Illinois and New York,” predicted McClintock.

As soon as McClintock finished, Bishop adjourned the hearing – ostensibly girding for a vote Thursday. That’s where the committee would vote on the bill to allow Puerto Rico to restructure its debt and impose a financial control board. But Bishop scrapped Thursday’s session.

“The administration is still negotiating on provisions of the legislation, creating uncertainty in both parties,” Bishop said in a statement.

But if everything was lined up, there’d be no need to negotiate further.

A bipartisan amalgam of lawmakers opposes the bill – even as Ryan and House Minority Leader Nancy Pelosi, D-Calif., made the issue a priority. Conservatives don’t like the debt restructuring. Democrats think a control board is heavy-handed.

It’s anybody’s guess how a mélange of Democrats and Republicans could come together to approve this legislation.

“Congress has a constitutional and financial responsibility to bring order to the chaos that is unfolding in the U.S. territory -- chaos that could soon wreak havoc on the American bond market,” warned Ryan.

Bishop has long hoped for a bipartisan vote on the plan. He was angling for what’s called a “voice vote” on the bill in committee. A “voice vote” is exactly what it sounds like. Lawmakers aren’t individually recorded as voting yea or nay. Bishop simply asks who votes aye and lawmakers verbally respond “aye.” He then inquires who’s opposed. Those against the bill holler “no.” Bishop would then conclude that “in the opinion of the chair” either the ayes or noes “have it.”

A “voice vote” is not a violation of “regular order.” It’s simply one of three ways lawmakers can approve a bill or amendment in committee or on the House floor. But a voice vote maneuver can shield lawmakers from criticism. No one truly knows who voted yea or nay. There’s no official record. Thus, this gambit could make it easier to forge bipartisan support.

But McClintock said he would have demanded a roll call vote on the final version of the bill. Fox News is told that Democrats would have asked for such a vote as well.

Puerto Rico Democratic Gov. Alejandro Garcia Padilla visited the Capitol Wednesday. He told Fox News the draft legislation is “much improved over previous ones but there is still a lot of work to be done.” He said the debt restructuring provision “does not work right now.”

On Wednesday, Bishop lamented that some lawmakers claimed he rushed the legislation. Never mind that Pelosi secured a deal with Ryan last December to address the issue by the end of March – and it’s now April. Bishop said some committee members failed to know he’d convened four hearings on the issue already.

Bishop didn’t read his statement from the rostrum during the abbreviated session late Wednesday. But if he had, lawmakers would have gotten an earful.

Here’s what the chairman inserted into the record:

“If Members haven’t taken the time to understand the choices before us, you have failed in your obligations as a representative of the U.S. Congress. A bailout on the backs of your constituents is upon us if we fail to act,” said Bishop’s statement.

That capped off a manic day for Puerto Rico on Capitol Hill.

Congress simultaneously celebrated Puerto Rico’s history and raised questions about its future in the span of just a few hours.