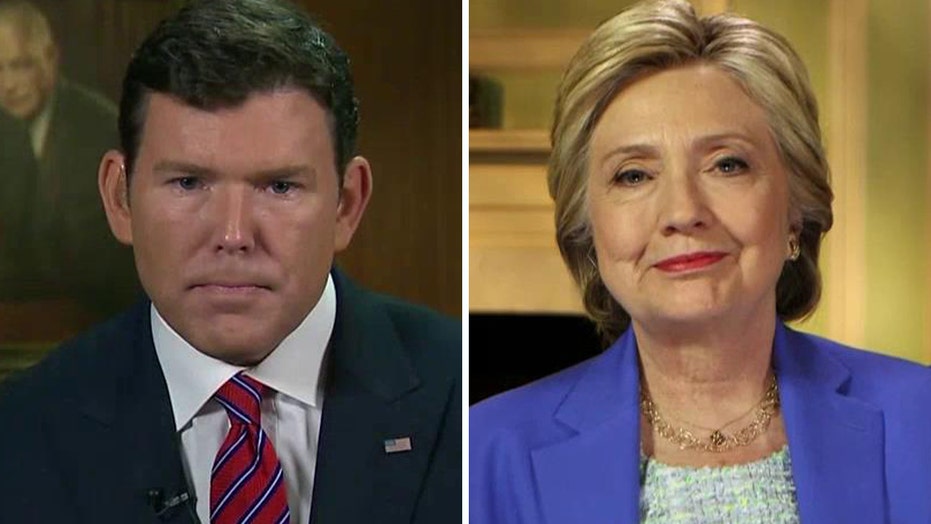 Hillary Clinton: There is no basis for an indictment

Hillary Clinton doubled down Wednesday on claims that her personal email scandal will not hurt her presidential bid or result in an indictment, in an interview with Fox News in which she made only a passing reference to another more immediate hurdle -- Sen. Bernie Sanders.

The Vermont senator continues to stay in the Democratic primary race despite Clinton securing enough delegates earlier this week to become the party’s presumptive presidential nominee.

“I applaud Sen. Sanders' vigorous determined campaign,” Clinton told Fox News' Bret Baier one day after her big win over Sanders in California. “I think that our primary contest was good for the Democratic Party and good for America.”

Clinton said the probe into the Clinton Foundation -- in addition to the  controversy about her use of a private email server when secretary of state and the related FBI investigation -- will not impact her general election bid, though such issues did create problems in her primary campaign.

“That's what I'm saying. That happens to be the truth,” Clinton said in the interview.

Clinton also reiterated what she told 1070 Radio on Friday about the FBI probe into the email scandal not resulting in an indictment.

“Absolutely that is not going to happen,” she said. “There is no basis for it. And I'm looking forward to this being wrapped up as soon as possible.”

However, Clinton declined to say whether anybody inside the department told her or any associates how the investigation will conclude, saying only that she knows the department has spoken to “a number of people” close her and that she’s willing to talk to federal investigators.

Clinton said she previously declined to talk to investigators about the email issue because “what they wanted to ask, we'd already talked about … in the public arena.

She pointed out her 11 hours of Capitol Hill testimony on the matter and concluded the exchange by saying she wasn’t going to comment on ongoing litigation “or make any legal points.”

Clinton also repeated her arguments that she never sent or received classified information by the server system and that previous secretaries of state had similar setups.

Clinton also waived off a question about whether her husband President Bill Clinton understands the modern-day economy well enough to be an economic adviser if she becomes president.

“I think there are lessons to learn from what my husband did during his eight years,” she said. “I'm going to be looking for good advice, and one of my best advisers about what we can do to really help people who feel left out and left behind will be my husband.

Sanders said after losing in California said that he will compete in the primary in Washington, D.C., next week. However, it's unclear whether he will continue to take his campaign into the party's July nominating convention, trying along the way to get superdelegates committed to Clinton to instead vote for him.

Sanders is scheduled to talk Thurdsay with President Obama in a meeting in which they will liklely speak about Sanders staying in the race or dropping out to help create party unity.