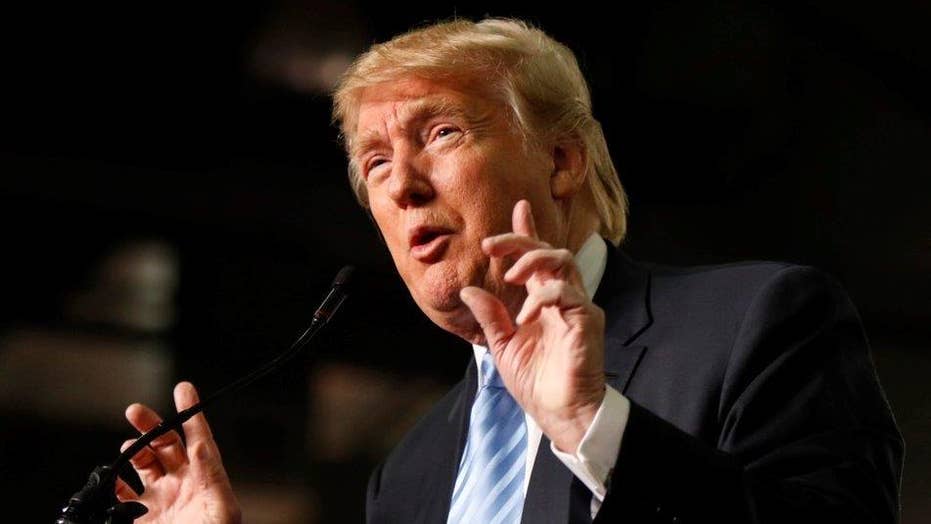 Trump blasts 'dishonest' poll that has him 12 points behind

Does claim that Washington Post/ABC News oversampled Democrats have any merit? Chris Stirewalt reacts on 'The Real Story'

A Washington Post/ABC News poll puts Clinton 12 percentage points ahead with a 51-39 lead over Trump. The same survey had both candidates in a statistical tie last month.

According to those polled, there was “sweeping unease” with Trump.

Two out of three Americans polled said they think Trump is unqualified to lead the nation, are anxious about the idea of him as president and disapprove of his comments on women, Muslims and his repeated attacks on a federal judge because of his heritage.

Trump slammed Judge Gonzalo Curiel’s character and said the judge could not fairly preside over the ongoing Trump University cases because of his Mexican heritage.

Curiel, whose parents are Mexican immigrants, grew up in Indiana.

The fallout from the Curiel comments has been swift and has led to some top Republicans like George Will breaking with their party.

Will, a conservative columnist and prominent Republican commentator for more than 40 years, said he’s grown disillusioned and frustrated with the GOP.

“After Trump went after the Mexican judge from northern Indiana, then (House Speaker) Paul Ryan endorsed him and I decided that, in fact, that this is not my party anymore. I changed my registration to unaffiliated 23 days ago,” Will said on “Fox News Sunday.”

A second Wall Street Journal/NBC poll shows a much closer race between the presumptive nominees, giving Clinton a five percentage point lead over Trump. However, if third-party candidates are factored in, then Clinton’s edge is virtually erased.

The survey of 1,000 registered voters showed Clinton leading 46 percent to 41 percent in a head-to-head matchup with Trump in November, but when Libertarian candidate Gary Johnson and Green Party candidate Jill Stein are included in the count, Clinton’s lead drops to 1 percentage point

Though Clinton is leading, it’s notable that Trump’s numbers have dropped by only 2 points since May.

The poll was conducted June 19-23 – during arguably one of most tumultuous periods of Trump’s presidential campaign. Over the past week, the New York real estate mogul fired his campaign manager and faced criticism over his weak fundraising numbers and lack of organization.

“Donald Trump has had the worst month one can imagine, but Clinton’s negatives are so high the net impact on the ballot is almost invisible,” Bill McInturff, a Republican pollster who conducted the survey with Democratic pollster Fred Yang, said.