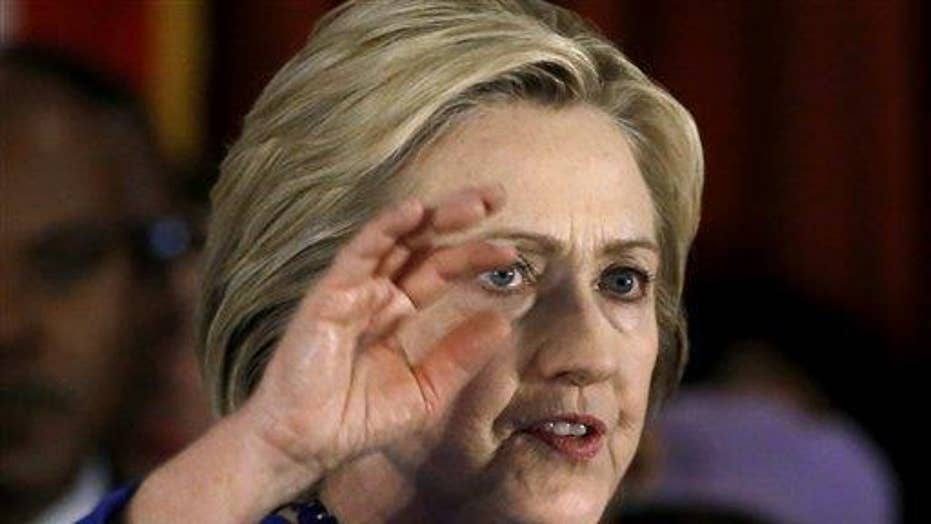 EXCLUSIVE: One of the classified email chains discovered on Hillary Clinton’s personal unsecured server discussed an Afghan national’s ties to the CIA and a report that he was on the agency’s payroll, a U.S. government official with knowledge of the document told Fox News.

The discussion of a foreign national working with the U.S. government raises security implications – an executive order signed by President Obama said such unauthorized disclosures are “presumed to cause damage to the national security."

The U.S. government official said the Clinton email exchange, which referred to a New York Times report, was among 29 classified emails recently provided to congressional committees with specific clearances to review them. In that batch were 22 “top secret” exchanges deemed too damaging to national security to release.

Confirmation that one of these exchanges concerned a reported CIA asset means the emails went beyond issues like the drone strike campaign. Democrats repeatedly have said some messages referred to this, reinforcing Clinton's position that the documents are over-classified.

Based on the timing and other details, the email chain likely refers to either an October 2009 Times story that identified Afghan national Ahmed Wali Karzai, the half-brother of then-Afghan president Hamid Karzai, as a person who received “regular payments from the Central Intelligence Agency” -- or an August 2010 Times story that identified Karzai aide Mohammed Zia Salehi as being on the CIA payroll. Ahmed Wali Karzai was murdered during a 2011 shoot-out, a killing later claimed by the Taliban.

Fox News was told the email chain included then-Secretary of State Clinton and then-special envoy to Afghanistan and Pakistan Richard Holbrooke and possibly others. The basic details of this email exchange were backed up to Fox News by a separate U.S. government source who was not authorized to speak on the record.

It’s unclear who initiated the discussion – Clinton, Holbrooke or a subordinate – or whether the CIA's relationship with the Afghan national was confirmed, because the classified documents are not public.

Holbrooke died in December 2010, during his service as a special envoy.

A CIA spokesperson told Fox News they had no comment on the email chain.

A spokeswoman for the Office of the Intelligence Community Inspector General also had no comment.

Stewart added, "I can't imagine how anyone could be familiar with these emails, whether they're sending them or receiving them, and not realize that these are highly classified."

While the Clinton campaign claims the government classification review has gone too far, Executive Order 13526, in a section called "classification standards,” says, "the unauthorized disclosure of foreign government information is presumed to cause damage to the national security."

Fox News was first to report that the Clinton emails contained intelligence beyond “top secret,” and some of the information was deemed "HCS-O" – a code that refers to human intelligence from ongoing operations.

National security and intelligence experts emphasized to Fox News that security clearance holders are trained to not confirm or deny details of a classified program in an unclassified setting, which would include a personal unsecured email network, even if the classified program appears in press reports.

As secretary of state, Clinton signed at least two non-disclosure agreements (NDA) on Jan. 22, 2009, and received a briefing from a security officer whose identity was redacted. As part of the NDA for “sensitive compartmented information” (SCI), Clinton acknowledged any “breach” could result in “termination of my access to SCI and removal from a position of special confidence and trust requiring such access as well as the termination of my employment or any other relationships with any Department or Agency that provides me with access to SCI."

It is remains unclear how classified materials “jumped the gap” from a classified system to her personal server.

On Feb. 12, Clinton’s national press secretary Brian Fallon emphasized that classified information would have been marked as such. “I think when this review plays itself out, at the end they’ll find that what we have said is true,” he told CNN. “Nothing was marked classified at the time it was sent.”

Fallon also attacked the State Department inspector general, Steve Linick, for what he described as “fishing expedition-style investigations” since Clinton decided to run for president. “There is no basis. It is intended to create headwinds for her campaign, but it is not going to work,” Fallon said. He leveled a similar allegation against Intelligence Community Inspector General I. Charles McCullough, III, after his office notified Congress the emails contained information beyond top secret.

Inquiries by Fox News to Clinton's attorney David Kendall about the status of or changes to her security clearance, and access to classified information, have not been returned.