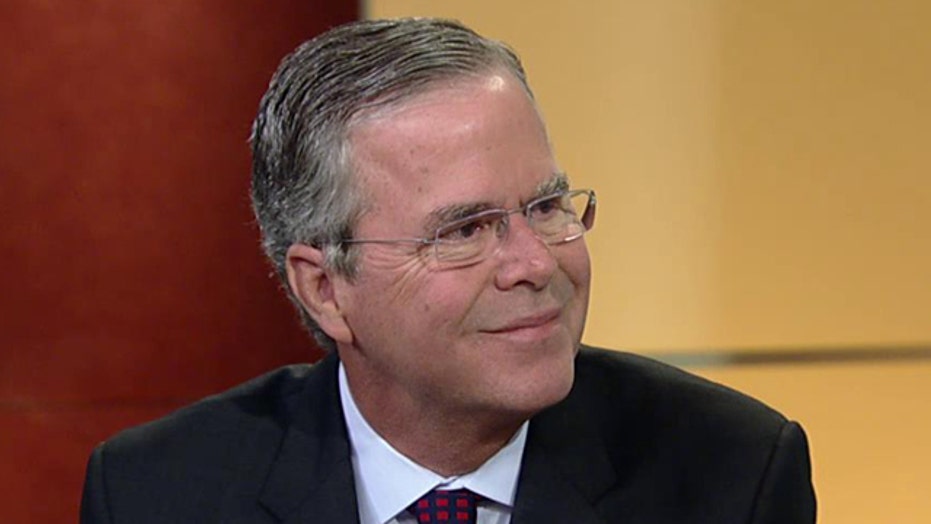 How Jeb Bush plans to beat the anti-establishment candidates

WASHINGTON – Republican presidential candidate Jeb Bush said Tuesday that if he is elected in 2016 he will be more fiscally conservative than his older brother, former President George W. Bush.

During an appearance on “The Late Show,” Stephen Colbert asked Jeb Bush how he is different from his brother, who served as president from 2001 to 2009.

“He should have brought the hammer down on the Republicans when they were spending way too much,” the former Florida governor told Colbert, who made his debut as host of “The Late Show.”

Bush and Colbert also discussed whether Washington’s culture can be changed, with Bush suggesting that "we have to restore a degree of civility."

Meanwhile, Donald Trump, the current Republican front-runner for the 2016 presidential nomination, on Tuesday released a fake commercial that poked fun at Jeb Bush’s personality. The commercial, which states Bush can help people fall asleep, includes footage of an audience member nodding off during a speech by Bush on Sept. 3 at New Hampshire’s Foss Manufacturing.

Trump has repeatedly attacked Bush for having “low energy.”

“Donald Trump’s not gonna get elected by disparaging people,” he said. “By attacking people all the time, that’s not gonna be how you win. You lift people’s spirits up to be President of the United States.”

Bush told Fox News that he wasn’t backing down from Trump’s comments.

“You’ve got to fight back,” he said. “My message is hope and optimism. We’re on the verge of the greatest time to be alive. “

As for Colbert, he’ll round out his first week on the job with a visit from Vice President Joe Biden on Thursday.