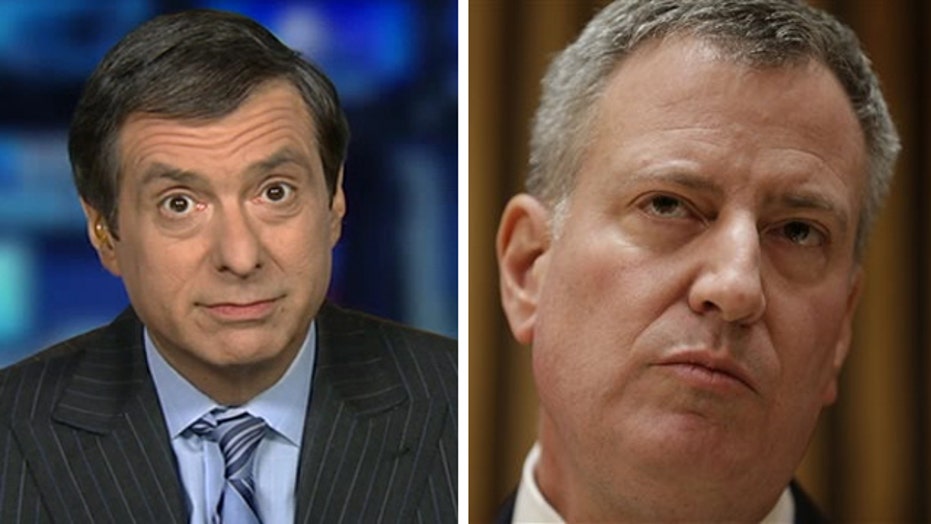 Kurtz: De Blasio is dumb to pick a fight with the press

In the fall of 2013, when Bill de Blasio was rolling to a 72 percent landslide win in the New York mayor’s race, I was struck by how little attention he drew from the national press.

The contest wasn’t close, he wasn’t a national figure like Rudy Giuliani or Michael Bloomberg, and so he got about as much coverage as Eric Garcetti winning the L.A. mayor’s office—which is to say, very little.

Well, everyone knows who Bill de Blasio is now. His popularity has plummeted. He’s on the defensive in the national furor over the murder of two Brooklyn police officers. He's lost the support of the police force. And he thinks the best strategy is to whack the press?

Even as he was trying to deliver a message of unity on Monday, de Blasio couldn’t resist blaming the messenger—this in a tabloid town that can make life miserable for any mayor.

Asked about protestors that chant such things as “NYPD…KKK,” de Blasio said: “What are you guys gonna do? Are you gonna keep dividing us?”

Two police officers are dead, some critics are unfairly accusing the mayor of having blood on his hands, and he stands there facing a bunch of reporters and says it’s their fault?

“What you managed to do is pull up the few who do not represent the majority, who are saying unacceptable things, who shouldn’t be saying those things,” de Blasio complained.

As a matter of strategy, this was dumb. De Blasio stepped on his own message, which was trying to mend fences with the cops and appeal for unity. Instead, he picked a fight with the press, which knows how to punch back.

Thus, Michael Goodwin in the New York Post: “The mask of conciliation came off. Actually, he ripped it off with a snarl and gave vent to his smoldering anger at what he regards as the real culprit.

“No, it’s not the protesters who beat and spit on cops and accuse them of being the KKK. It definitely isn’t the mobs chanting for dead cops. Nor is it those who shut down highways, bridges and invade stores to disrupt the holiday season.

The real problem, as de Blasio sees it, is the media.”

But since it’s the Christmas season, let me be generous in considering the mayor’s argument. He went on to say:

“That’s how you want to portray the world but we know a different reality… They, my friend, are not the majority. Stop portraying them as a majority.”

Well, no one is portraying them as the majority, that’s silly. In fact, the NYPD got some good press for the fact that the demonstrations in the wake of Eric Garner’s choking death on Staten Island were mostly peaceful.

But when de Blasio says the media enable those who want conflict, and rarely portray the bravery of everyday cops, and sometimes amplify the most extreme voices, he’s got half a point. In Ferguson, the media quickly chose sides, with some outlets and commentators portraying Michael Brown as an innocent victim and others as a thug who left Darren Wilson no choice but to act in self-defense. Unfortunately, some on the left refused to abandon the original narrative when evidence showed Brown had attacked Wilson in his patrol car and tried to grab his gun.

The media were more unified after Garner’s death, thanks to that chilling videotape, but quickly went into blame-game mode when a mentally ill gunman shot the two officers in their Brooklyn squad car. Now de Blasio is fueling the finger-pointing mentality rather than trying to rise above the fray.

He was already at odds with the police because he ran against the stop-and-frisk tactics of the Bloomberg administration. But he seems not to understand the power of symbolism. It may have been reasonable for him to say he had told his biracial son Dante “how to take special care in any encounter he has with the police officers who are there to protect him,” but it rubbed the cops the wrong way. His open alliance with Al Sharpton, who many in the police view as a racial rabble-rouser, hasn’t helped. In fact, the MSNBC host’s decision to blow off de Blasio’s appeal to delay further protests until after the funerals for the slain officers drives home his stir-things-up approach to race.

Politico has a telling anecdote about the mayor’s wariness of the police:

“According to a former de Blasio aide, during the general election campaign in 2013, de Blasio’s team was even convinced that members of his police detail were eavesdropping on his private conversations in his city-assigned car. Things got so bad that de Blasio, according to the staffer, would step into the street to make sure he was out of earshot of plainclothes officers.”

In less than a year, de Blasio has squandered an awful lot of good will as the city’s first Democratic mayor in 20 years. Now he’s desperate for a scapegoat. But lashing out at the media isn’t helping matters.