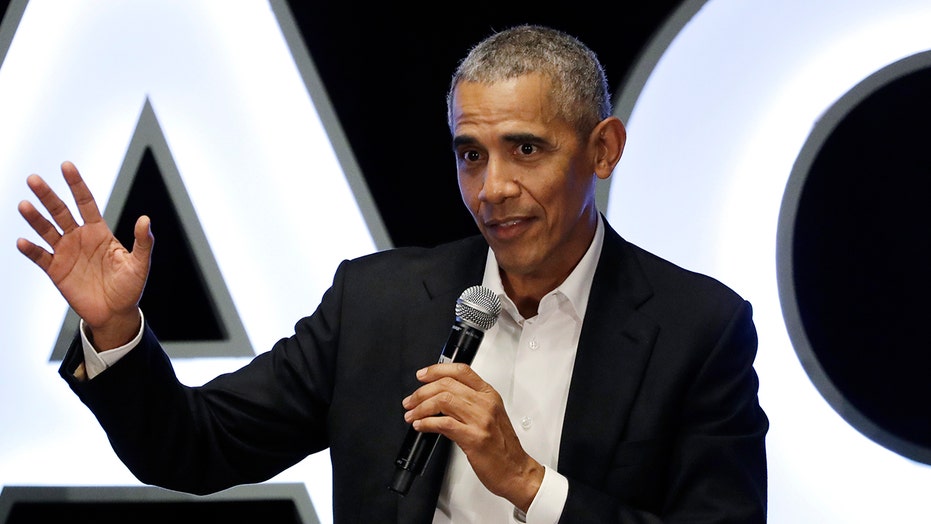 Can the former president mend a divided party? Reaction and analysis on 'The Five.'

On Wednesday, the day after Biden, Obama's former vice president, swept Super Tuesday and reclaimed his front-runner status, Sanders’ campaign released an ad in Florida that showed Obama touting his character and record in past remarks.

AS BIDEN CONSOLIDATES SUPPORT, SPECULATION KICKS UP OVER VALUE OF AN OBAMA ENDORSEMENT

“Bernie is somebody who has the virtue of saying exactly what he believes, great authenticity, great passion, and is fearless,” Obama says in the ad. “Bernie served on the Veterans’ Affairs Committee and got bills done.”

“I think people are ready for a call to action,” he continues. “They want honest leadership, someone who cares about them, they want somebody who’s going to fight for them and they will find that in Bernie.”

The Biden campaign hit back on Wednesday, dismissing the ad as ineffective and highlighting Biden’s record in the Obama administration.

“Barack Obama chose Vice President Biden to be his partner over 8 years in the White House, entrusting him with managing the stimulus that saved our economy from a depression, obtaining the deciding vote for the Affordable Care Act, and countless national security priorities,” Biden campaign Rapid Response Director Andrew Bates said in a statement to Fox News. “By contrast, Senator Sanders explored a primary challenge to President Obama, who he compared to a ‘moderate Republican’ and said was not a ‘progressive.’”

He added: “As recent history has proven, no quantity of ads can rewrite history—and there’s no substitute for genuinely having the back of the best president of our lifetimes.”

The campaign -- and Biden himself -- have repeatedly invoked reports claiming Sanders once threatened to launch a primary bid against Obama in 2012. The Atlantic first reported Sanders’ threats, which reportedly prompted then-Senate Majority Leader Harry Reid to intervene to get him to abandon his presidential ambitions.

“I was proud to run with Barack Obama,” Biden said last month. “I’m proud to still be his friend, and I tell you what, I promise you I wasn’t talking about running a Democratic primary against him in 2012.”

Biden has doubled down on the narrative that his candidacy represents a continuation of the Obama legacy, but the former president has yet to endorse him.

Some analysts argue an endorsement right now might even lead to a backlash at this stage.

“He runs the risk, endorsing early, of ruffling the feathers of supporters of those he doesn’t endorse,” Mo Elleithee, a former spokesman for Hillary Clinton’s 2008 presidential campaign and now-Fox News contributor, told Fox News. “Rather than putting his thumb on the scale now, there is going to be a need for his help in unifying the party after the convention, and he’s probably better positioned to do that than anyone else.”

Elleithee told Fox News that unifying the Democratic Party is “one of the most important roles” for Obama to play this cycle, but warned that if the primary becomes “more tense or more fractured,” party elders will need “to do some work to smooth that over.”

Elleithee acknowledged Obama will ultimately play an important role in unifying the party but said “it’s easier to do that if he has not involved himself in the primary.”

He questioned whether an Obama endorsement would be a make-or-break moment but added: “If he were to endorse, I think it would be a boost for whoever he endorsed.”

Meanwhile, a source close to Obama told CNN that they, too, were “skeptical” that an Obama endorsement at this point could “change the political winds right now,” warning that there is “a very real chance it backfires.”

“If he were to try to put his thumb on the scale now, it would take away his ability to do so when it’s most needed — the general election,” the source told CNN. “Weighing in now likely only divides things worse and weakens his standing for when the party will need it most.”

It is unlikely that Obama would endorse Sanders, according to a report in November that claimed that the former president once stated privately he would speak out against Sanders, a self-described democratic socialist, if he appeared to be pulling ahead of the pack.

An Obama spokesperson, however, reportedly noted that he has stated that he would get behind the Democratic nominee, no matter who it is.

Meanwhile, Sanders has said he is “extremely confident” he could have the support of Obama.